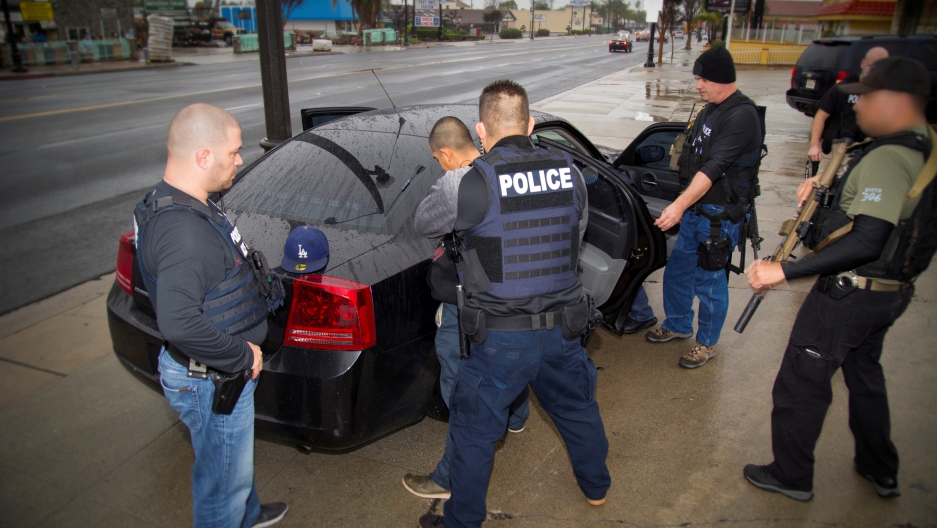 ICE officers detain a suspect as they conduct a targeted enforcement operation in Los Angeles.

On the campaign trail, Donald Trump made deportations and illegal immigration and centerpiece of his election.

This week, we got an idea of what that would look like as policy: lists of crimes created by immigrants, deputizing police officers as immigration enforces and speeding up deportations across the board.

In the hours after the Homeland Security announcement, there was a mood of fear and uncertainty at a day laborer center in Queens, New York, where immigrant workers go to get work in construction, house cleaning and painting. Most workers were unwilling to speak on record, but one man, an Ecuadorean migrant, did agree to talk. Rafael, who didn't want to be identified with his last name, told us people are scared.

If immigration enforcement starts in New York, he says, it’s going to be catastrophic for the city. And he echoed a question many in the immigrant community have posed in light of the ramping up of deportations: Why not put those law enforcement resources into going after high-profile criminals?

"I think at first when Trump got elected, it was like ... it’s the criminals, it’s the people we don’t like. But now, slowly, it’s coming to home like ... we’re all at risk, too. Even if we have residency in this country, we’re at risk too," says Charlie Uruchima, a labor coordinator at this center.

Other day laborers who wanted to remain anonymous said they've been caught in the crossfire of immigration enforcement. One woman spoke about how, a few nights ago, ICE agents came to her building in Long Island, and started aggressively knocking on her door. They were looking for another woman in the building, who has an arrest warrant. But she herself was terrified.

Another worker, who is in the country legally, says last year he was picked up in a case of mistaken identity, and placed in immigration detention for more than a month.

As the administration moves forward with its immigration enforcement plans, protests are ongoing. Migrant assistance groups are holding informational clinics, educating people about their rights. But Maritza Ortiz, who organizes women day laborers in Queens, says for many immigrants, it's time to go.

Ortiz says a lot of people she knows are thinking of buying tickets and self-deporting.