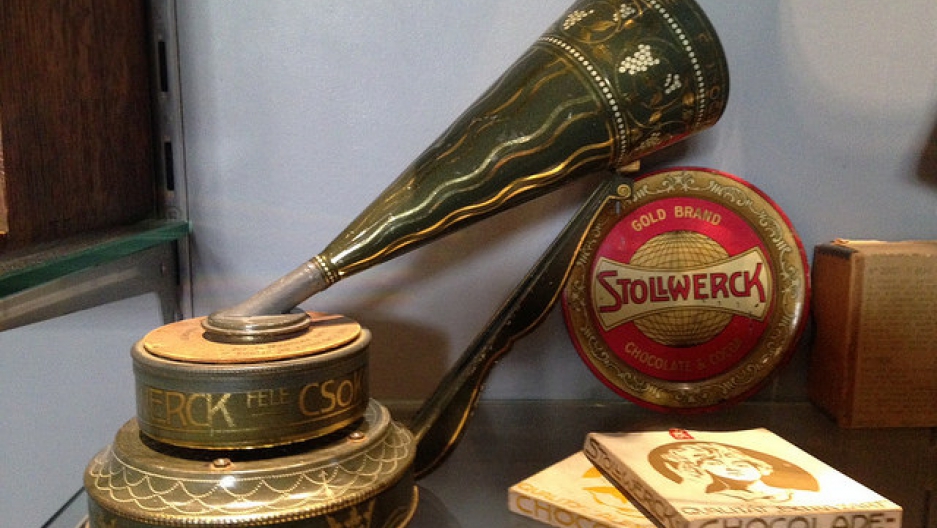 A Stollwerck toy phonograph, with chocolate record, circa 1903, is shown here.

The privately run Phono Museum, which opened in 2014, guides visitors through the history of recorded sound. But it has struggled to overcome financial problems, despite a collection full of old and sometimes bizarre artifacts of audio history.

“It’s an extraordinary thing to be able to hear someone without seeing them,” says Jalal Aro. The private collection he and his wife began 25 years ago, picking through Paris flea markets and junk shops, now makes up the core of the Phono Museum in Pigalle.

A giant cabinet contains what Aro calls one of the first steps toward recorded music, a sort of giant mechanical music box, made in Switzerland in 1880.

The first of what we think of today as audio recordings played from wax cylinders, not flat disks. They played on machines produced by the companies of sound pioneers Thomas Edison and Alexander Graham Bell. The American lead in this technology means that many early recordings are in English, whether they be poems or songs. They would soon be joined by international inventors and companies such as Pathé in France.

Early on, manufacturers did not feature new music. Because of the scratchiness of the sound, they stuck with the classics, so as to help listeners follow along.

A promotional phonograph made for the chocolate company Stollwerck in 1903 plays chocolate records.

As record players entered people’s living rooms, design became more important and machines were produced in a variety of colors and styles. With the 1920s came novelty machines like the ones in the museum’s collection shaped like a car and a ski chalet. 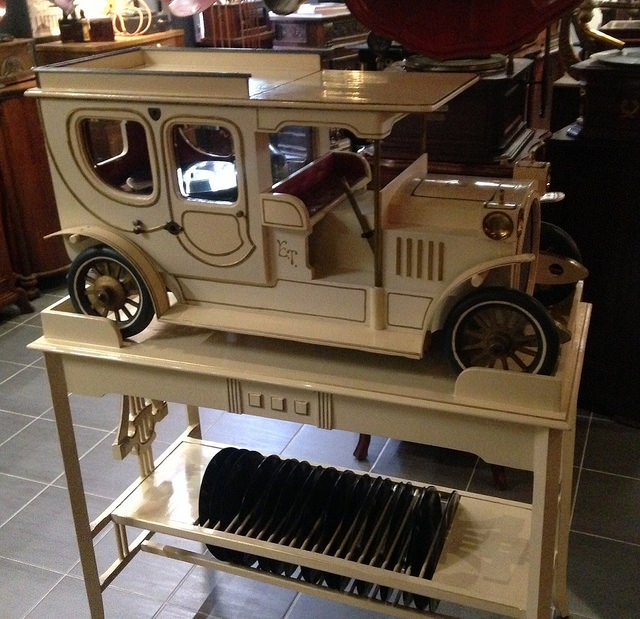 This is a turn-of-the-20th-century German player shaped like a car.

The idea of creating a museum grew out of the business Aro started, dealing vintage audio equipment internationally. Meanwhile, his and his wife’s personal collection had taken over their small Paris apartment.

“There was stuff everywhere,” Aro says. “We tried to arrange it in a way so as not to damage it and also to live with it. What was fun was that our kids they would play with the things when they were very young. We would explain to them how they worked.”

They were also spending a lot of time explaining the same things to people who wandered into their shop, close to the current site of the museum.

The location, on a less scenic stretch of the area around Montmartre, turned out to be a disadvantage. The museum did not get as many visitors as Aro had hoped, and other sources of income did not pan out.

The city of Paris owns the building that houses the museum, which is now run by a small association that includes Aro.

Last year, owing more than $50,000 in back rent, they announced the museum might have to close. Ironically, this turned out to be a help.

“We did crowdfunding,” Aro explains. “And all that mobilization created a different dynamic in talking with the city. It showed that there was interest.”

Visitor numbers climbed as people who learned about the museum from the news coverage came to visit.

“All of a sudden people said, 'Wow, this sounds interesting. I’m going to go see it before it closes',” Aro says.

Still in talks with the city as the museum enjoys this reprieve, Aro can now point to the support that came out of this crisis as evidence Parisians would like to see this museum remain a part of the city’s cultural landscape.