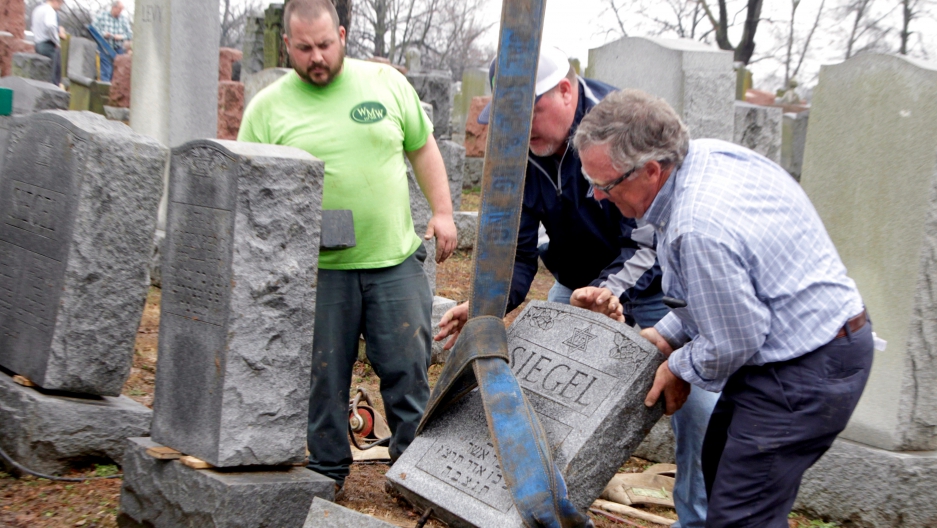 Monday was a banner day for anti-Semitic hate.

Bomb threats were phoned into at least 11 Jewish community centers around the United States. Then, in a Jewish cemetery outside of St. Louis, dozens of gravestones were vandalized.

Given these recent examples of what observers describe as a rising tide of anti-Jewish bigotry in the US, would President Donald Trump condemn anti-Semitism, “once and for all?”

That question came from Craig Melvin of MSNBC on Tuesday morning. President Trump was on a tour of the National Museum of African-American History and Culture in Washington, DC.

“I will tell you that anti-Semitism is horrible and it’s going to stop, and it has to stop,” Trump said. “You don’t know where it’s coming from, but I certainly hope they catch the people.”

Trump said he calls out anti-Semitism, “all the time.”

But many American Jewish leaders have said they had been waiting some time for a clear, straightforward denunciation of anti-Semitic bigotry from Trump.

Last week, Trump was asked twice about anti-Semitism. And both times, his answer was less than impressive to David Harris, CEO of the American Jewish Committee. In an open letter to the new US president, Harris described Trump as a man who calls it like he sees it.

“That’s why your equivocation and seeming defensiveness on the subject of anti-Semitism are so puzzling,” Harris wrote.

Harris concluded the letter with a plea for Trump, saying, “we urge you to condemn what has often been called ‘the oldest hatred’ — anti-Semitism — and unleash the power of government to match deeds with words.”

On Monday, after news of the bomb threats and the cemetery incident were reported, first daughter Ivanka Trump tweeted a response calling for religious tolerance.

America is a nation built on the principle of religious tolerance. We must protect our houses of worship & religious centers. #JCC

Ms. Trump is the president’s oldest daughter and one of his close advisers, and she’s also a convert to Judaism.

On Tuesday morning, Trump’s Democratic opponent in the 2016 presidential race Hillary Clinton tweeted at the president, calling on him to speak out.

JCC threats, cemetery desecration & online attacks are so troubling & they need to be stopped. Everyone must speak out, starting w/ @POTUS.

The Jewish community centers that received threats were evacuated and searched, and there were no bombs found at any of them. But these are scary times for some Jewish Americans.

“We’re seeing an uptick [in anti-Semitic incidents]," said Karen Aroesty, who’s the regional director of the Anti-Defamation League for the states of Missouri and Illinois.

Aroesty looked at the president’s statement condemning anti-Semitism and said, “In all honesty, I’d like to see more.”

In his latest comments, Trump hinted that it would be unfair to lay all of the blame for anti-Jewish bigotry at his doorstep.

“I think you maybe have had it for longer than people think, and maybe it gets brought up a little bit more,” Trump said.

The president might have a point here, suggests Shmuel Rosner, an editor and columnist at the Jewish Journal. Rosner broke down what Trump had to say publicly about anti-Semitism last week and says there are some politics at play.

“In Trump’s view, a lot of the growing level of talk about anti-Semitism is no more than a political strategy to destroy his credibility,” Rosner wrote.

“He offers a mild nod to opposing hatred in general, while continuing to empower the white supremacists who have come out of the woodwork to spread hate against Jews, at a level that we have not before seen in contemporary America,” wrote Rabbi Jill Jacobs of the Jewish human rights group T’ruah in response to an email.

And speaking of Anti-Semitism...You know what keeps Jews safe? Democracy. Other minorities too. Attacks on democracy endanger all of us.