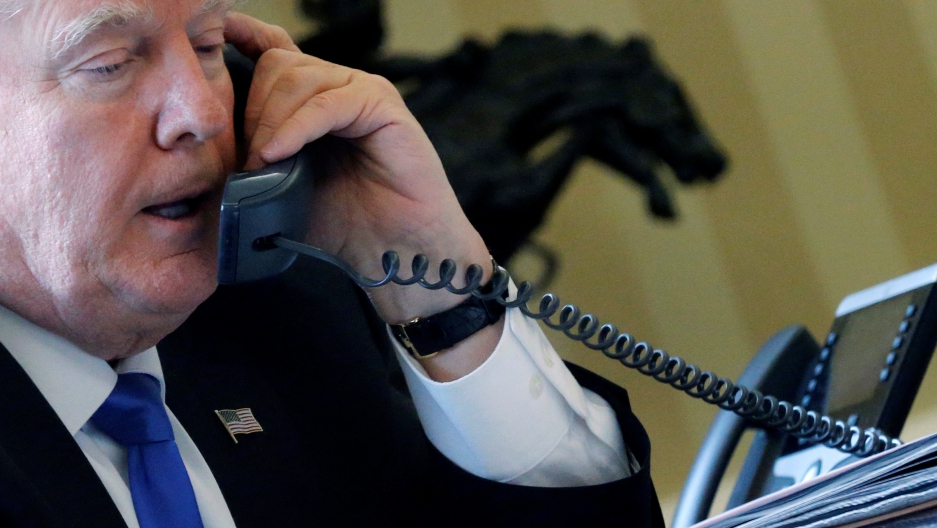 President Donald Trump speaks by phone with Russian President Vladimir Putin in the Oval Office at the White House, Jan. 28, 2017.

The Kremlin ordered Russian state media on Thursday to stop praising Donald Trump. It was a big change, and an indication that the Putin-Trump "bromance" could be on the rocks.

"As political scandals start to unravel in America, the Russians are actually starting to get very worried," says Arkady Ostrovsky, Russia editor for The Economist and author of "The Invention of Russia: From Gorbachev's Freedom to Putin's War."

"Suddenly Trump's losses become Putin's loss," Ostrovsky says. "Trump could easily become a liability for Putin because [Putin] tied himself so closely to him. And all the allegations about the hacking of the emails, and all the telephone calls that have gone between the Russian embassy and Michael Flynn, could actually be quite damaging."

Russian journalist Konstantin von Eggert wrote about the order in a blog for Deutsche Welle, Germany's equivalent of the BBC World Service. Check it out for more analysis of the order, if you speak Russian.

@kvoneggert
en 4 those without translate "After leaving Flynn Trump administration simply can not afford to say anything else." pic.twitter.com/W3qKtKL9WA

The Kremlin order follows months of positive Russian media coverage of the maverick US politician. For Russians, it has been a head-spinning time.

"Russian people, although they have been brainwashed a lot over the past years, are now very confused," says Ostrovsky. "Only a few months ago they were told that America is Russia's greatest enemy. Only a few months ago they were saying that all the sanctions and all the economic problems that Russia was having were due to America, and Russia was a besieged fortress, and America was trying to get it. Suddenly they were told, you know, Trump is a great thing."

Ostrovsky says Putin and Trump are in some ways, political kin. "Some of the things that they have done in their countries are strikingly similar," he says, "in terms of the use of the media and post-fact reality, lying about things and not just getting away with it, but not being even particularly embarrassed or bothered by that. And most of all," Ostrovsky adds, "doing away with all the niceties of the human rights liberal order. All those things."

Trump, like Putin, has been everywhere on Russian social media.

"Certainly the state media — and practically all television is state controlled — [went] out of their way to hail Trump's presidency ... and to present him as the first sort of honest leader — there's an irony — breaking from the cynicism and the hypocrisy of the elites."

Even as the Kremlin takes the spotlight off Trump, his presidency may still offer some opportunities for Putin.

"There are practical things that Putin might want," says Ostrovsky. "Lifting sanctions against Russia which were imposed after Russia annexed Crimea and started a war in Ukraine. Russia wants investment from American companies. And most importantly, Russia wants the US to get out of its backyard — to stop preaching, to stop interfering," he says.

These may not be such unreasonable requests of a Trump White House bent on undoing some of the foreign policy legacy of the presidents before him.