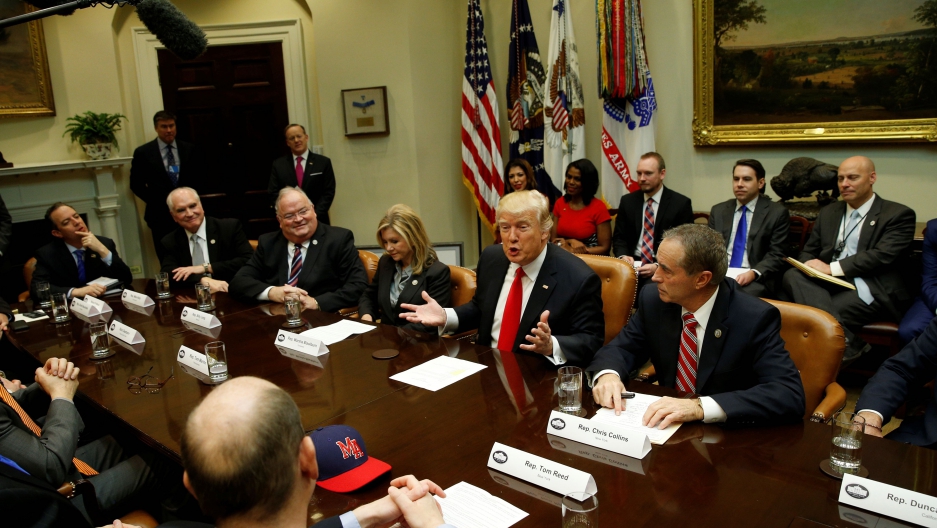 President Donald Trump holds a meeting with House Republicans at the White House in Washington, DC, on Feb. 16, 2017.

Even as Donald Trump was kicking lobbyists off his presidential transition team, he was quietly cashing checks from them.

At least a dozen registered lobbyists donated money to Trump for America, as the transition team was officially known, according to a Center for Public Integrity review of federal filings. Their ranks include hired guns who represent defense contractors, drugmakers, private prisons, telecommunications giants and tobacco companies, among other interests.

The actual number of lobbyists who donated to Trump’s transition is likely higher, as the transition team is not required to file its mandatory financial report until Sunday. But some lobbyists disclosed these contributions in separate documents filed with Congress.

At the time, Jason Miller, a spokesman for the transition, explained the decision: “[W]e’re not going to have any lobbyists involved with the transition efforts … When we talk about 'draining the swamp,' this is one of the first steps.”

One of those booted from the transition was J. Steven Hart, the chairman of lobbying firm Williams & Jensen, who had been overseeing the Labor Department transition.

Hart — whose clients include Coca-Cola, Comcast, Pfizer, United Airlines and Visa — donated $5,000 to Trump for America in November, according to a filing with Congress known as an LD-203 report.

In an email to the Center for Public Integrity, Hart said that Trump’s “drain the swamp” mantra had “interesting” applications for lobbyists, government officials and the media alike.

“When you do your job, are you doing it for money and personal advancement or considering the greater good? There are swamp creatures in every walk of life,” Hart wrote.

According to recent filings with Congress, other lobbyists who donated to the Trump transition last year include:

With the exception of Hart, none of the lobbyists contacted by the Center for Public Integrity responded to requests for comment. Nor did a spokesperson for the White House, which, under one of Trump’s executive orders, has imposed a five-year ban on administration officials later going on to work as lobbyists themselves.

Why would lobbyists donate to Trump’s transition team, which served as the official “government-in-waiting” that worked to craft the new administration’s policies and identify potential presidential appointees?

“Money buys access and influence,” said Craig Holman, a lobbyist for the public interest group Public Citizen, adding that he’s disappointed by the actions of a candidate who pledged to “drain the swamp” in Washington, DC.

“Trump isn’t carrying through with his campaign pledge to build a wall between his administration and the lobbying profession,” said Holman.

John T. Mechem, a spokesman for the Mortgage Bankers Association, said the $5,000 contribution the group gave in December through its PAC was “a means for us to help the Trump transition as they sought to identify the most qualified individuals for a variety of appointed positions in the new administration that will impact the business of financing residential, commercial and multifamily real estate.”

Jeff Leieritz, a spokesman for Associated Builders and Contractors, which also donated $5,000 through its PAC, said his organization was hopeful the Trump administration would “create a regulatory environment that will encourage greater business investment in the economy” and work to “rebuild our nation’s crumbling infrastructure.”

Also among the financial backers of Trump’s transition: a number of high-profile Republicans.

Overall, the Trump transition team raised about $5.4 million from private sources, including individuals, businesses and other entities. It also collected about $6 million in taxpayer money.