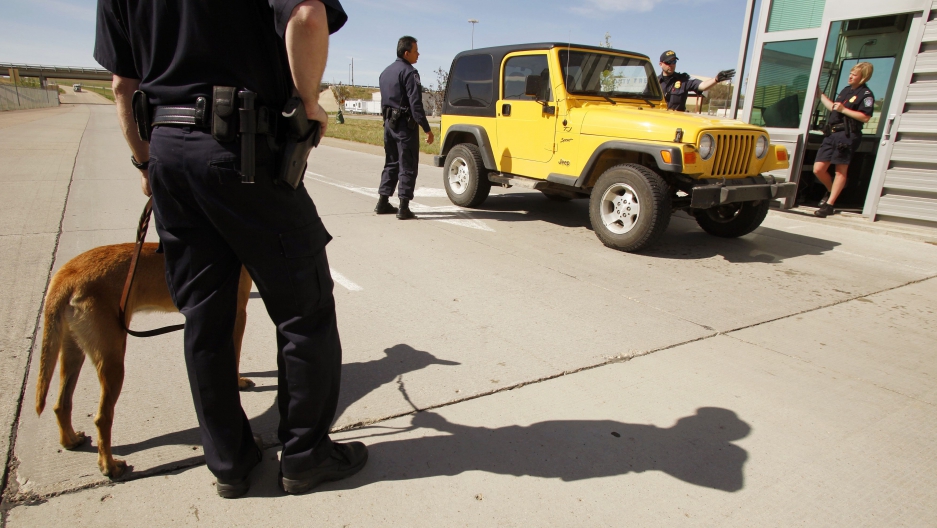 US border agents check a vehicle leaving the United States headed for Canada at the border crossing at Sweetgrass, Montana, May 28, 2009.

We’ve learned a lot about how entering the country and crossing borders work these days.

We know our phones and laptops are subject to search and seizure when we’re crossing a border, even if we don’t have to unlock anything for officers.

But what else should we know? What other rights do we have, if any, in that no-man’s-land between the plane and the international arrivals exit?

In general, to travel internationally, you need to have acceptable documents and a valid visa. (Often, the need for visas is waived between countries with good relations and/or significant travel. In that case, documents — usually a passport — will do. )

“That gives them the authority to travel, to present themselves to a border official,” Rey Koslowski said.

He’s an associate professor of political science at the Rockefeller College of Public Affairs and Policy at the University at Albany, and he studies border issues. He went on to explain that even after your plane lands in a country, for example, you haven’t entered the country in a legal sense.

“Essentially, it’s not until one has that interview and has documents inspected that one enters,” he said.

So what’s the best way to make sure your entry is a smooth one? Well, Koslowski says “probably, it’s best to be respectful, to be cooperative and to be forthcoming.”

If you’re returning to your own country, there’s somewhat less to worry about. International law requires states to accept their own nationals. But border officials retain significant leeway to detain and interview all travelers.

“When individuals are entering in to the United States, they present their passport, questions are asked,” Koslowski said. “And if there’s some indicator, whether it’s a hit on a watchlist or if there’s some anomaly in the travel pattern — say you booked a one-way ticket with cash ...  individuals might be put them in secondary inspection, as it’s called, where there are additional questions and where the person’s luggage will be examined, et cetera.”

Customs and Border Protection officials say they process about a million people a day, and are on the lookout for human trafficking, drugs, other contraband, agricultural pests, fugitives and people who threaten national security. Add the Trump administration’s immigration order on top of that and it’s, well, it’s chaos on top of chaos.

“So that makes matters more difficult,” Koslowski said. “And there’s only so many officers and lines.”