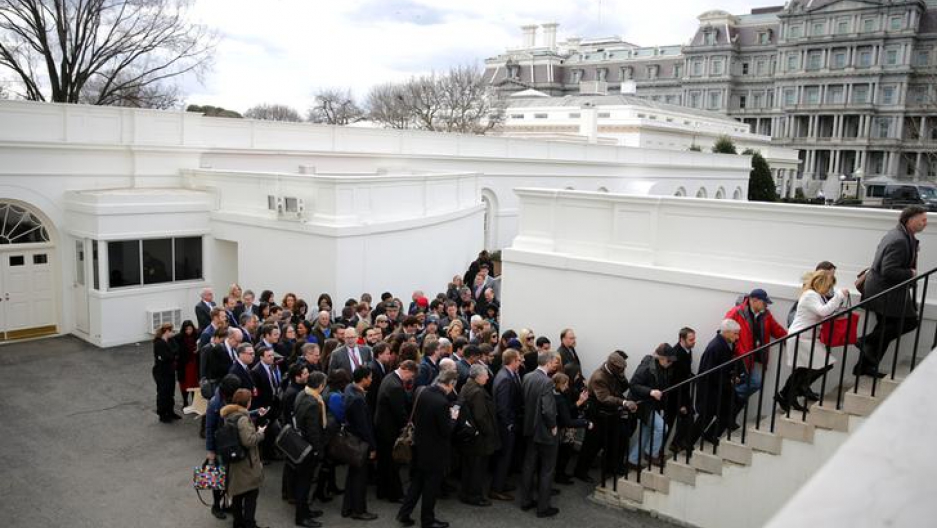 Members of the media line up to attend a news conference between British Prime Minister Theresa May and US President Donald Trump at the White House in Washington, DC, on Jan. 27, 2017.
Credit:

Love it or hate it, President Donald Trump's White House commands a lot of media attention.

It seems like newspapers, talk shows and social media all have been filled with an avalanche of executive orders, chaotic White House press briefings, dubious White House-Kremlin connections and a barrage of Trump’s accusations of "fake news."

"I really can't stand it anymore," says writer and human rights activist Chitra Nagarajan. She writes from Nigeria that all the focus on Trump is crowding out important stories happening elsewhere on the planet. Her piece in The Guardian headlined, "Despite what we see on TV, Donald Trump isn't the only news event on Earth," begins this way:

“When I enter a room where CNN is on, I ask for the channel to be changed or the television to be switched off. I admit it’s an odd kind of political act, but in Nigeria, where I live, CNN reports only one story: Donald Trump. And it is a story that needs to stop crowding out the rest of the world.”

In case you missed it, here's me trying to stop us being Trump obsessed & see stories we're missing outside US:https://t.co/vJhzUP0euU

Living in northeast Nigeria, Nagarajan says she relies on international news reports coming from many different sources including CNN, Agence France-Presse and the BBC.

“The only thing they talk about is US politics, and right now that's just Trump," she says. "While I understand it's a very exciting news story, there are so many other things going on in the world, which we’re just missing because the news media seems completely obsessed with Trump.”

It’s not just CNN that’s in Nagarajan’s crosshairs, but most of the international news media, in general. For example, Nagarajan points to the lack of media coverage of the latest UN report on Afghanistan — about the protection of civilians in armed conflict, from 2016 — which recorded the highest number of civilian casualties in a single year since records started in 2009. And the lack of headlines about alarming human rights violations recently documented against members of the Rohingya community in Myanmar.

Not to mention the dramatic events that occurred on the same day as Trump's inauguration, when military forces from Senegal, Nigeria and Ghana crossed the borders into The Gambia to reinforce the presidential election results there.

On the other hand, Trump is the new president of the biggest country in the world in terms of its international influence. It's the early days of the Trump Administration, and there are a lot of things to sort out. So, why is it a problem to focus on Trump and his new administration?

"Look, I'm not saying that we should not be talking about him at all," Nagarajan says, "but I think we need to give the US the coverage that it deserves in terms of its place in the world, and the US does not dominate the world. There are lots of things happening in other countries. We no longer live in an era of a single superpower, you have rising economies ... just look at China, India, Nigeria, South Africa and Brazil."

Even in terms of cultural influence, Nagarajan points out that “it’s not just Hollywood and American hip-hop, but telenovelas are screened all over the world, including in Nigeria, and Nigerian hip-hop is the music that is played not just across the African continent but in Europe, too. So, I think that we need to stop living in a US-centric world and really look at the world that we’re living in now.”

In effect, Nagarajan is arguing for a need to "decolonize" the international news media and to stop living in the past.

“I think we need to accept that the US is not all-powerful anymore, that may have been true in the past but that’s certainly not the case today. I actually predict that Trump will lead to even more waning influence of the US in global politics. So, I think, yes, we need to know what is happening in the US and how that will affect global politics and climate change for example, international peace and security, but we don't need to know the minutia of the details about Trump’s education nomination in the Trump Cabinet.”

In her own corner of the world, Nagarajan says there are news stories being largely overlooked by the international media. A string of suicide bombings by Boko Haram occurred in her city, Maiduguri, in recent days. There's also an impending famine in the region that the UN has been trying to avert in regions of Nigeria as well as Yemen, South Sudan and Somalia “but we're just not covering all of that. We have millions of people at risk of starvation and, yet, let’s talk about what Trump has decided and the saga with the national security adviser.”