At the Cottbus Chamber of Crafts trainees enrolled in a refugee training program prepare for the day's metalworking assignment, in Cottbus, Brandenburg, Germany, Jan. 11, 2017.

For the past two years, Germany has faced a variety of obstacles in its effort to integrate hundreds of thousands of asylum-seekers — from right-wing political resistance and terrorism fears to backed-up bureaucracy and a lack of accommodations.

Those refugees and migrants are working to create new lives for themselves. And that means finding jobs that can support them. The German government is trying to help.

It’s not an easy process, but when you hear stories like Rahim Rahimy’s, the country’s daunting task seems a little more possible.

Rahimy, 18, fled to Germany from Afghanistan in June 2015. He and his father had been employed as truck drivers for a German transportation firm, and Rahimy says their neighbors became suspicious of them for working with a foreign company. He and his father began to feel their lives were in danger.

"People stopped trusting me and thought that it was suspicious that I lived in Afghanistan and worked with Germans," he said. "Many Afghans just don't trust foreigners."

German police escort migrants to a registration center after they crossed the Austrian-German border in Wegscheid near Passau, Germany, Oct. 20, 2015.

Rahimy’s refugee journey lasted a grueling two months. He fled from Afghanistan to Iran, then to Turkey, where he crossed the Mediterranean to Greece. He followed the Macedonian route to Hungary, then passed through Austria and eventually arrived in Eisenhüttenstadt, a city near the Polish border in eastern Germany. He enrolled in a local high school, but the language made classes a struggle.

"My first day at school was really, really bad. I couldn't speak any German. They all laughed at me," he said. "But I tried my best anyway because I had to."

After a year and a half — and a lot of hard work — Rahimy is making his way in Germany. He’s become fluent in the language, and he’s done well in school — well enough that he could have attended a university if he’d wanted. Instead, he plans to enroll in an apprenticeship program in government administration. That, too, will be a hard road, but he’s ready for it.

"I just don't have the energy to wait anymore for some office to approve my application to study,” he said. “I just want to stand on my own two feet.”

Not every refugee story in Germany goes like Rahimy’s.

Germany accepted more than 1 million refugees and migrants in 2015 and over 300,000 last year. With many of these refugees now finishing their initial requirements for asylum — Germany approved 390,000 out of 723,000 asylum applications last year through November, according to the Federal Labor Office —  the country now faces the challenge of incorporating them into the labor market.

The government of Chancellor Angela Merkel hopes the influx of migrants will solve the country's labor shortage, a result of Germany’s rapidly aging population and fewer young people opting for vocational training. But getting refugees trained and hired is proving difficult.

According to the labor office's December 2016 report, unemployment among refugees has almost doubled in the past year. Around half are now unemployed.

The largest barrier to landing a job is proficiency in the German language, the labor office reported.

A volunteer conducts German language lessons for refugees and migrants inside an improvised shelter at a sports hall in Hanau, Germany, Sept. 24, 2015.

Getting a job also requires proving that you’re qualified for it. Having made often arduous journeys, many refugees lack documentation of their professional experiences. And it can be hard to confirm work and education history in home countries stricken by conflict.

"It's expected that the new influx could reduce Germany's demographic problems. However, there's not much information about their qualifications," Bauer said. "Some arrive with high levels of education. But there are also those who have no formal qualifications at all."

These issues with language and certification have led officials to steer refugees into the country's apprenticeship system for vocational training. Students can choose to enter into a trade apprenticeship after the 10th grade, and the training process resembles university-level education. Courses are both theoretical and practical. Hundreds of trades offer apprenticeships — everything from government administration and bookkeeping, to metalworking and nursing. Depending on the trade, an apprenticeship can take more than three years to complete.

In early 2016, the German government along with the German Confederation of Skilled Crafts — the centralized bureaucratic body for trade associations — set out to create a streamlined, nationwide program to prepare refugees for the apprenticeship system.

The two-year, €20 million ($21,339,000 million) program, named Perspectives for Young Refugees, provides regional vocational centers with the funds to enroll refugees in a six-month preparatory program that includes training in trades such as metal and electrical work, as well as language and integration classes.

Ahmad Hosseini, an 18-year-old trainee and refugee from Afghanistan, works with a rasp at the training workshop of Knipex, a 130-year-old tool manufacturer in Wuppertal, Germany, Oct. 25, 2016.

Months before the national plan rolled out, a similar approach was already underway at the Chamber of Crafts in Cottbus, a small municipality south of Berlin.

The Cottbus chamber began providing refugees with integration classes and introductory-level courses in trade skills as early as October 2015. The inspiration for the program stemmed from the needs of both the refugees and the region of southern Brandenburg. Germany’s demographic challenges and labor shortages especially affect the former communist East.

"We see a wealth of opportunities here for refugees to plant some roots," said Christoph Schäfer, the chamber’s deputy managing director. "It's basically a win-win: These people can integrate here. There's affordable housing. There are also open positions."

The program is now a part of Perspectives for Young Refugees and offers training to about a dozen participants at a time in six-month cycles. They've trained between 60 and 70 young refugees so far.

While the chamber’s program gives participants skills and much-needed networking opportunities to land an apprenticeship, success rates are still anemic: Only four graduates of the program have received a job placement, even though the chamber works with some 900 companies in the region with the capacity to take on trainees.

Schäfer defended the program, but said six months just isn’t enough. Many refugees’ language skills are still too poor and their professional experience too little to qualify for German firms, he said.

"The training level of the refugees that are coming to us is shockingly low," Schäfer said. "Regardless of aptitude, the basic prerequisite to an apprenticeship is knowledge of the language."

Many don’t comprehend the difficult path that lies ahead, he added. 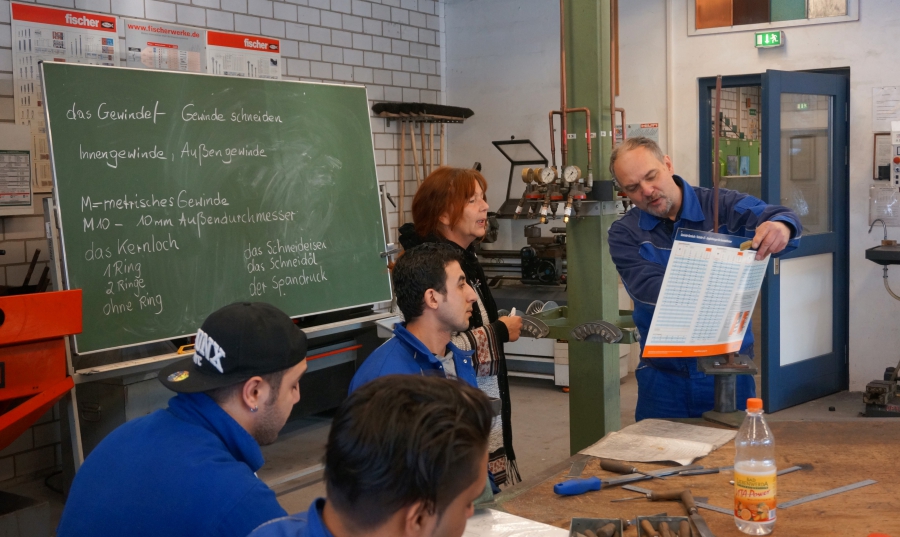 At the Cottbus Chamber of Crafts, Instructor Gerald Beyer discusses the day's assignment with the class German instructor. As Bayer gives the day's lesson in metalwork, relevant vocabulary is written on the chalkboard. It's a crucial step in getting the refugee participants' language up to par to eventually take part in a rigorous German apprenticeship, in Cottbus, Brandenburg, Germany, Jan. 11, 2017.

Opting in, opting out

In the chamber's workshop, 12 refugees, all young men between the ages of 20 and 30, were receiving a lesson in metalwork.

While instructor Gerald Beyer discussed the morning assignment — fashioning and repairing an auto part — a German language teacher wrote relevant vocabulary on a chalkboard at the front of the room. The trainees, dressed in the traditional craftsmen's blue overalls, followed along before dispersing to the surrounding workbenches to carry out the task.

Not everyone enrolled in the program is happy with what they’re learning.

"I don't really think anything I'm learning here is useful," said Ali, 24, a Syrian refugee who arrived in Germany about a year and a half ago. (The Chamber of Crafts requested that all last names of participants be omitted).

After Ali finished his first state-administered German language class, the Job Center told him he needed to enroll in the program or else face deductions in the monthly allowance he receives from the German government.

But Ali isn’t interested in working with his hands.

"I want to go into business," he said. "I don't think I'll be able to use these skills later in life." 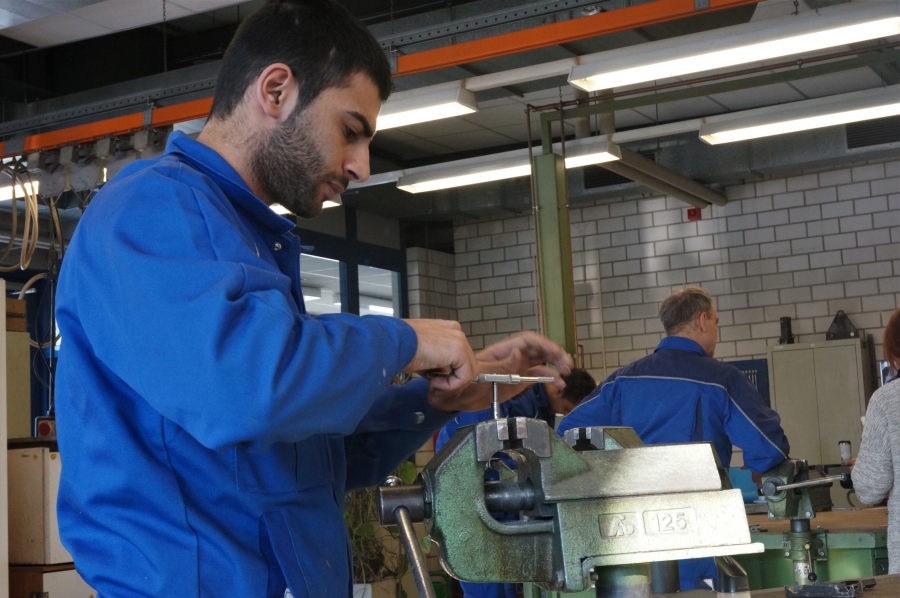 Ibrahim, 22, from Syria, works on the day's assignment at the Cottbus Chamber of Crafts, in Cottbus, Brandenburg, Germany, Jan. 11, 2017.

Others were more excited.

Ibrahim, 22, also from Syria, has been in the program for four months and wants to become a mechanic.

"For the most part, I think the project is good," he said. "I need someone who will help me find an apprenticeship, which is something that's offered here."

But for Ibrahim and others like him, graduating from the program may not be enough to succeed in Germany’s apprenticeship system.

According to Bauer of the Expert Council on Integration and Migration, the rigor of a traditional German apprenticeship may prove too difficult and lengthy after such a short introduction. While refugees may be able to master the practical aspects of a trade, the theoretical component, which involves classwork, homework and studying, can often present challenges.

"They need at least a year's education in the language to build themselves up to the schooling," he said.

That’s partly why many refugees simply opt out of vocational training all together: Rather than gamble on a system they don't fully understand, some would rather perform unskilled labor immediately to earn at least a meager living for themselves and their families.

“Most refugees are unaware of how an occupational degree works in Germany,” Bauer said. "You have to keep in mind that these are adults … they can't afford to wait.”

In the long run, though, they could be shortchanging themselves, he said.

“Without a degree or some type of certification, there's a very high likelihood that these people will end up unemployed,” Bauer said. “Our challenge is convincing them that job training is really crucial for them to make a life here."

"I want to continue studying and learning. For the first 17 years of my life, I experienced so many terrible things. I want to finally be able to live peacefully."

It's a challenge that Rahimy in Eisenhüttenstadt knows all too well.

He knows many refugees and migrants that are fed up with the German system and have quit their studies. He understands why some Germans think the refugees are a drain on society, but also why many refugees themselves feel destitute.

"There's so many that just wander the streets," he said. "They've become aggressive and just sit around and smoke the entire day."

He remains hopeful about his job prospects. It's a small step in the grander scheme of his new life, he said.

"I want to continue studying and learning," he said. "For the first 17 years of my life, I experienced so many terrible things. I want to finally be able to live peacefully."

Correction: An earlier version of this story mistranslated a portion of a quote from Thomas Bauer.