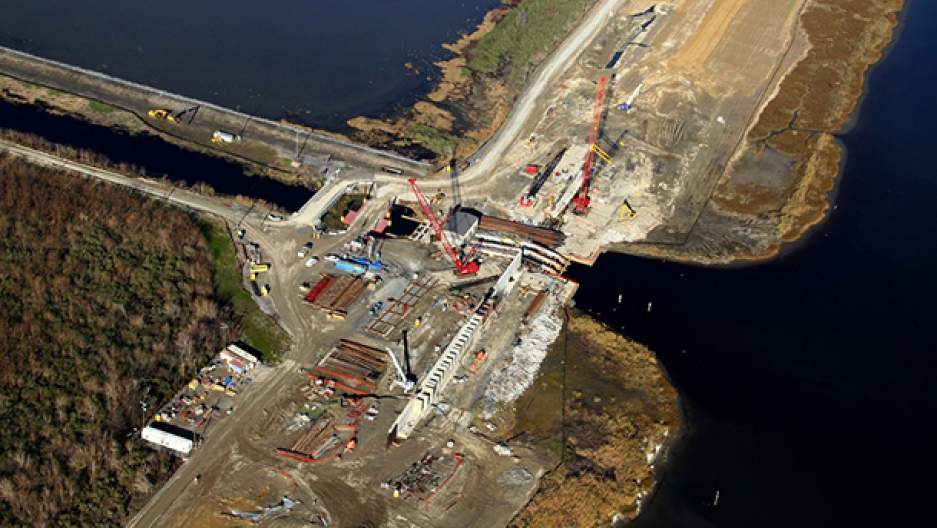 The US Army Corps of Engineers crews installed a flood wall around a drainage pump station in New Orleans East in 2011 — just one of many projects designed to protect the Gulf Coast from storm surges and loss of wetlands.

US Army Corps of Engineers/CC BY 2.0 (image cropped)

The disaster of Hurricane Katrina in 2005 made clear how vulnerable New Orleans and the low-lying communities along the Gulf Coast are to fierce storms and surging seas. So, a master plan was devised to shore up defenses and repair the sinking coastline that protects the city. Now, authorities have released an updated $50 billion, 50-year plan that rethinks and bolsters those defenses.

The planners now have “a lot more of the science necessary to help design some of these projects and more information about how high sea levels will be — which has required them to make dramatic changes in what they would expect to happen,” says Mark Schleifstein, an environment reporter with the New Orleans-based Times-Picayune who has been reporting on the plan and following the public’s response.

“[Now], it’s more a question of what can they save and what they can’t,” Schleifstein says. “They’ve made very clear [that], while they keep talking about $50 billion in 50 years, the $50 billion is just a start for what will be a continuous, long-term process of providing more protection and more restoration.”

The new plan reflects an understanding that even with these steps taken, it will not lead to a “no-net-loss of wetlands situation ... there will be a significant loss of wetlands along the state's coast.”

Indeed, for the midlevel projection of sea level rise, the plan would create 802 square miles of new wetlands, but the reality is that the state would also still lose 2,000 square miles of wetlands — an area the size of Delaware, Schleifstein says.

In addition to rebuilding lost wetlands, the plan calls for restoring a cypress-tupelo forest next to the Lower Ninth Ward in New Orleans. “There used to be a shortcut for shipping that went to downtown New Orleans, called the Mississippi River Gulf Outlet,” Schleifstein explains. “It was completed [in] 1965, but since then the cypress forest that was in that area — what remained of it — has died because of the salt water that it allowed in. After Katrina, Congress determined that this navigation channel needed to be closed, because it was no longer financially feasible … So, they dammed it off at a midpoint, and they're going to be filling in part of the area that was a cypress forest to get it to the depth where they can start growing cypress trees again.”

The $25 billion that’s set aside for levees, berms and other protections includes a long-term plan to increase the height of the post-Katrina levee system around New Orleans by as much as three feet, Schleifstein says.

“While the plan talks about it in the context of a 500-year event, the reality is that in 50 years, it may very well be that they're going to need that three feet to keep a hundred-year level of protection for the city of New Orleans, which would be enough for them to continue to have federal flood insurance in that area,” Schleifstein says.

The coastal restoration plan has also led to another regional benefit: “[There's] a viable industry being created around coastal restoration, in terms of engineering for the projects, in terms of a demand for new dredges to do some of the work for dredging, and for building wetlands,” Schleifstein says. “The state hopes and expects that it will actually be able to outsource some of those created jobs to other communities around the world that will need the lessons learned from here in Louisiana.”