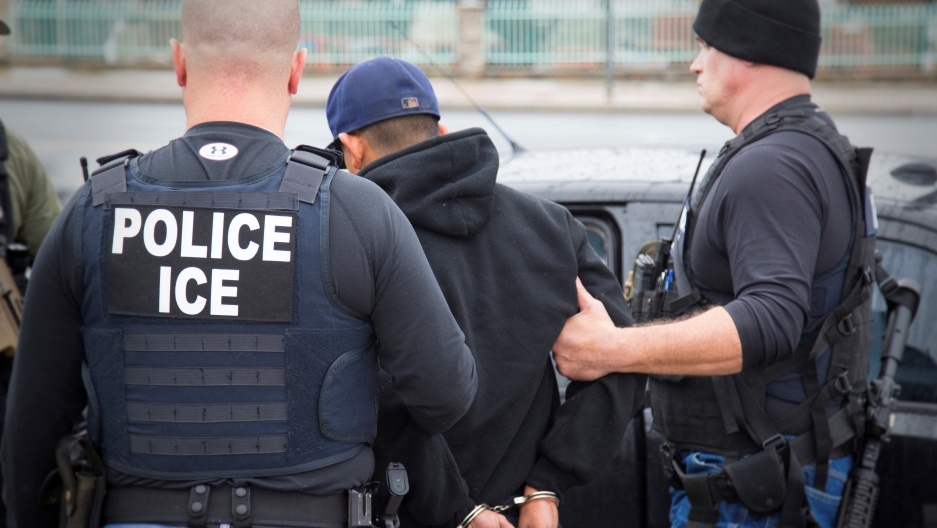 US Immigration and Customs Enforcement (ICE) officers detain a suspect as they conduct a targeted enforcement operation across the country on February 7, 2017. A string of immigration actions and executive orders and have left many undocumented immigrants and their families worried about what comes next.

When news that Daniel Ramirez Medina was detained in Washington state became public this week, a shiver went up the spines of hundreds of thousands of people.

Ramirez is believed to be the first DACA recipient to be targeted for deportation under the administration of US President Donald Trump. DACA is Deferred Action for Childhood Arrivals, an executive order issued by President Barack Obama in June, 2012 to give temporary relief from deportation and work authorization to some undocumented immigrants who were brought to the US as children. Over 860,000 people have been accepted in the program, according to government data (PDF).

On Monday, attorneys for Ramirez filed a lawsuit to challenge his detention in federal court. The Department of Homeland Security said in a statement that Ramirez is a gang member and thus no longer eligible for deportation relief. They have also said that his detention is consistent with policies of the Obama administration; 1,500 DACA recipients have lost their protections since 2012 because of criminal convictions or gang affiliation, the statement says.

Obama administration policy was to require a criminal conviction, rather than gang affiliation alone. Available data does not, however, specify the reasons people have been deported.

Ramirez, through his lawyers, has rejected the charge that he is part of a gang. He has no criminal record and had to pass a security clearance in order to gain the temporary protections of DACA. Ethan Dettmer, one of the attorneys representing Ramirez, told Reuters that his client was pressured to say that he is in a gang. "While in custody, he was repeatedly pressured by US Immigration and Customs Enforcement agents to falsely admit affiliation,” Dettmer said.

Ramirez's case in the latest in a string of immigration enforcement actions that have alarmed many people in the country who are undocumented or in programs that give them work authorization.

Immigration agents detained 680 people in raids across at least seven states last week, which Homeland Security Sec. John Kelly said was a routine part of operations to arrest criminals that have been going on for years. Federal officials also detained and deported a Phoenix woman who appeared for a scheduled check-in with authorities.

But some immigration rights advocates see the raids as a provocation to generate panic in the immigration communities.

Juan Escalante, also a DACA recipient, is an advocate with America's Voice. He says that Trump's executive orders have eliminated the priorities for deportation that were established under the Obama administration. But rumors and misinformation are spiking fear; people are copying and pasting innacurate information on social media. DACA recipients, he advises, should get informed and prepared for changes in immigration policy. Be aware of your rights, he says.

DACA recipients should consult with an immigration attorney certified to answer questions, Escalante says. Some organizations that can help, he says, are the American Immigration Lawyer Association, the National Immigrant Law Center and the American Civil Liberties Union. And in the meantime, he says, people need to continue to pursue a legislative solution to the broken immigration system that hurts some 11 million undocumented immigrants and their families.

"At the end of the day, our safety and our contributions should be just as important as everyone else's," says Escalante.