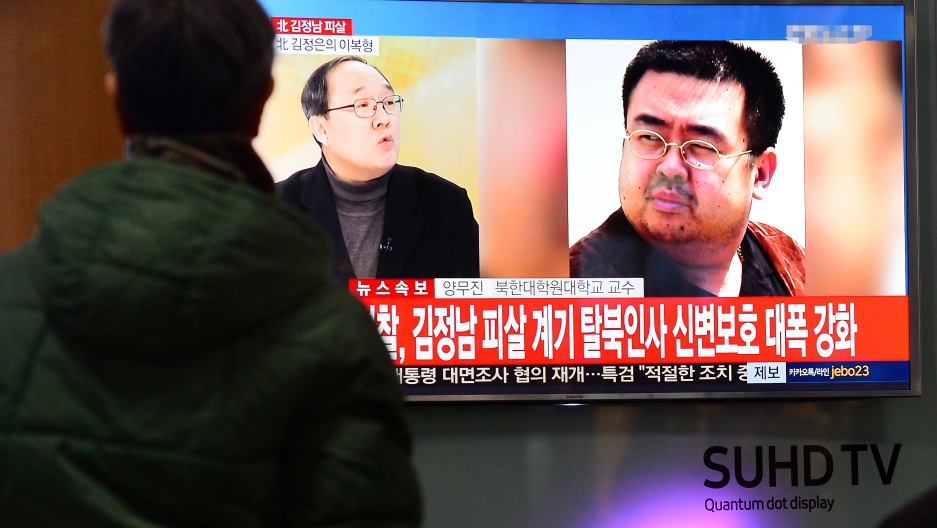 People watch a TV screen broadcasting a news report on the assassination of Kim Jong-nam, the older half-brother of the North Korean leader Kim Jong-un, at a railway station in Seoul, South Korea, on Feb. 14, 2017.

The details from news reports about the assassination of Kim Jong-nam sound like they’re straight out of an international spy thriller.

In an airport in Kuala Lumpur, Malaysia, on Monday, a man struggles to get help from staff on duty. One version of the story says he had been jabbed with a poison needle, another one says that two women had approached the man from behind and covered his face with cloth soaked in an unknown liquid.

The man’s eyes burned as he sought assistance. He was rushed to the hospital, but he was gone before the ambulance made it there.

The precise details of the man’s death might be difficult to confirm for some time to come, if ever.

But what appears to be solid, however, is that the victim was Kim Jong-nam, the son of North Korea’s late "Dear Leader" Kim Jong-il, and the older half-brother of the country’s current "Grand Marshal" Kim Jong-un. And that he was murdered.

At one time, Kim Jong-nam was thought to be the natural choice to become the third generation of the Kim dynasty to rule over the Democratic People’s Republic of Korea.

Kim had a reputation for being a bit of a wild child. He was also said to be close to Jang Song-thaek, who was reportedly executed in a 2013 purge ordered by Kim Jong-un.

Biographical details about Kim Jong-nam are pretty thin, but the website "North Korea Leadership Watch" has some good background.

US officials reportedly suspect that Kim’s murder this week was a political assassination, ordered by Kim Jong-un.

Isaac Stone Fish, a senior fellow at the Asia Society in New York, says it’s not clear why American officials are drawing that conclusion, but he says there appears to be a motive here that makes a lot of sense.

“I think we can speculate that Kim Jong-nam was the only other living pretender to the throne. So, this could be the last step of housecleaning as Kim Jong-un further consolidates power,” Stone Fish says.

Kim Jong-nam was born in 1971. He was the son of North Korean actress Song Hye-rim, a mistress of his father, Kim Jong-il. The boy was brought up in secret, apparently because his grandfather Kim Il-sung, the founder of North Korea, did not approve of his son’s relationship with Song.

In 2001, Kim Jong-nam’s name was all over the international news because he was caught trying to enter Japan with a fake Dominican passport. He claimed to be attempting to take his young son to Tokyo Disneyland.

Kim had been quoted in the news media saying that he disapproved of dynastic succession for North Korea, and there was speculation that he was in favor of Chinese-style reforms for the country.

If this was a political assassination ordered by the North Korean government, it would not be the first one carried out beyond the DPRK’s borders.

“The biggest message, if we want to judge by what we know right now, is that Kim Jong-un is sending the message that he’s in control,” Stone Fish says.