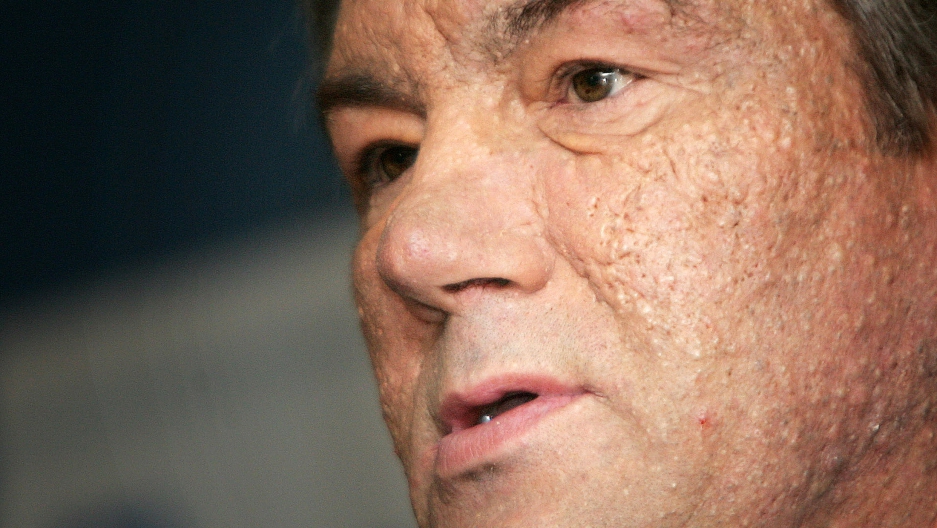 Ukrainian President Viktor Yushchenko speaks at Chatham House in London October 17, 2005. Yushenko was poisoned in an attack he blamed on Russian agents.

September 1978: Georgy Markov, a Bulgarian dissident living in exile in London, is stabbed with a ricin poison-tipped umbrella as he is going home from his job with BBC World Service radio. He dies four days later.

September 1997: Israeli agents working in Jordan administer poison to the leader of the Palestinian group Hamas, Khaled Meshaal, who is living there. But the agents are captured and in order to obtain their release Israel is forced to provide an antidote. Meshaal survives after falling into a coma.

September 2004: Ukrainian politician Viktor Yushchenko, campaigning against Russian-backed candidate Viktor Yanukovych for his country's presidency, is diagnosed with dioxin poisoning which disfigures his face. His supporters accuse the Russian secret service of being behind the incident. Yushchenko goes on to win the election.

November 2004: Palestinian leader Yasser Arafat dies in a French military hospital. French experts are unable say what had killed him, fueling accusations that he was poisoned by Israel.

After a murder probe French prosecutors dismiss claims he was poisoned, after Swiss experts said they found high levels of radioactive polonium on his personal effects.

September 2004: Indonesian human rights campaigner Munir Said Thalib dies of arsenic poisoning after a flight from Jakarta to Amsterdam. A pilot is convicted of killing him on behalf of his country's intelligence services, but in October 2006 the sentence is quashed by the Indonesian Supreme Court.

November 2006: Former Russian spy Alexander Litvinenko dies in agony after drinking tea laced with highly radioactive Polonium-210 at a London hotel, in a case which plunged Moscow-London relations into a deep chill.