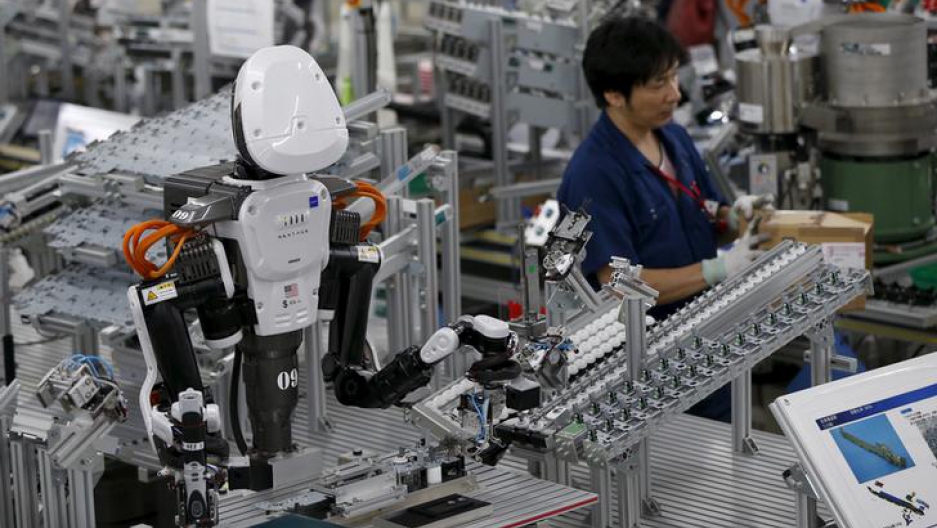 A humanoid robot assembles automatic change dispensers next to a human worker at a factory in Kazo, north of Tokyo, on July 1, 2015.

In his first press conference as the President-elect, Donald Trump boasted that he “will be the greatest jobs producer that God ever created.”

But will those jobs be for humans, or machines?

Automation — or "the creation and application of technology to monitor and control the production and delivery of products and services,” as defined by the International Society of Automation — is poised to shake up the American economy in the long term.

For example, Vivek Wadhwa notes in the Chicago Tribune that the Boston Consulting Group predicts that in 2025, it will cost manufacturers less than $2 per hour to task machines with the work of welding. Compare that to today’s going wage for human welders, $25 per hour, and it is easy to imagine companies choosing to replace living and breathing workers with machines.

Wadhwa points out, as well, that companies like Uber are accelerating the development of self-driving vehicles in order to cut costs. The advent of driverless cars could mean that millions of American workers who drive taxis and trucks for a living will wake up in the next decade and find that their jobs have become obsolete.

Research suggests it would be a mistake to think that only a small portion of the American workforce will be affected by automation. In a report about how Americans perceive the threat of automation to American jobs, Associate Director of Research at Pew Aaron Smith points to a 2013 Oxford University study that found that nearly 50 percent of all American jobs could be performed entierely or in part by machines.

“What that ultimately means is there will be fewer jobs,” CEO Greg Hayes said about the company’s move to mechanized labor.

Thomas H. Davenport, author of “Only Humans Need Apply: Winners and Losers in the Age of Smart Machines,” pointed out in the Harvard Business Review that since taking office, Trump has been vocal about many matters of job loss, including companies moving factories overseas, outsourcing, and international trade deals like the North American Free Trade Agreement.

In fact, in his first days in office, Trump stepped away from the Trans-Pacific Partnership deal because he said it was a “job killer,” even though critics have pointed out that if Trump’s decision to pressure companies from moving jobs overseas does in fact create more jobs in the United States, the higher costs of production in the US might actually accelerate automation — which in turn will reduce opportunities for Americans to work.

But Trump has said very little about automation. And instead of addressing the well-documented threat that machines pose to American workers, he has pedaled disproven theories that accuse migrants of taking American jobs.

You say you'll produce more jobs than anyone else. But Mr. President, how will you protect American jobs from automation? Click here to tweet the question to the president.