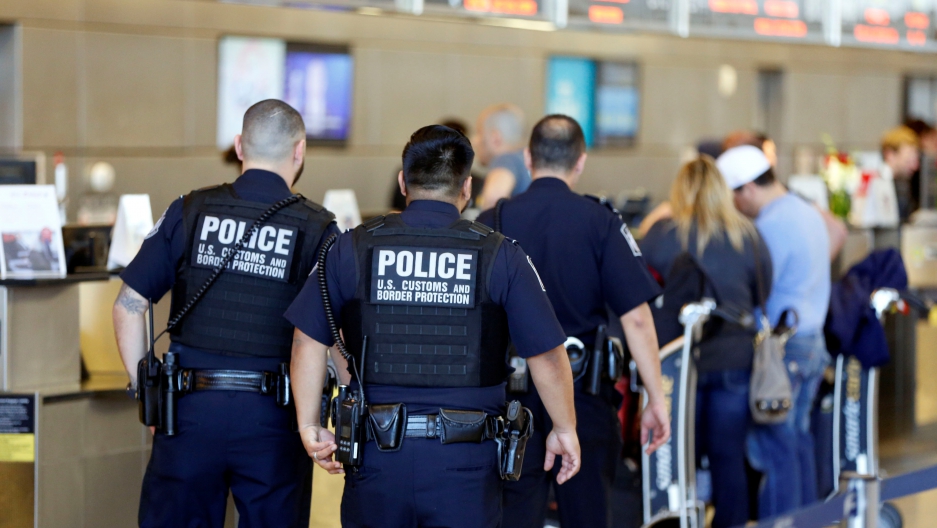 Officers with US Customs and Border Protection walk past ticket counters during the travel ban at Los Angeles International Airport (LAX) in Los Angeles, California, January 28, 2017.

The White House confirmed Sunday it is considering issuing a new order on immigration now that President Donald Trump's travel ban has been halted as it makes its way through the courts.

He said the next step would be either filing an emergency appeal to the Supreme Court, defending the merits of the order in lower courts or issuing a new one.

"The president's powers here are beyond question," said Miller, who is considered one of the driving forces behind Trump's first actions on immigration.

Miller insisted the president has the power to keep some people from entering the United States.

"We are contemplating new and additional actions to ensure that immigration is not a vehicle for admitting people into our country that are hostile to its nation and its values," Miller said.

The order that Trump issued abruptly on January 27 halts resettlement of all refugees for 120 days and that of Syrian refugees indefinitely.

It also bars for 90 days the entry of nationals from seven mainly Muslim countries.

A federal judge in Seattle issued a stay against the order on February 3. Then a three judge appeals panel in San Francisco voted unanimously last week against reinstating Trump's ban. Among other things, it rejected the argument that the president's actions in the area of immigration cannot be reviewed by the courts.

The Trump ban was supposed to be in place while the government comes up with a new system of so-called "extreme vetting" of people seeking entry visas. This could include checks on their social media accounts, according to John Kelly, the secretary of homeland security.

"Our immigration system should not be a vehicle for admitting people who have anything but love in their hearts for this nation and this constitution," said Miller, who is 31.

The idea of the White House issuing a modified immigration order that would survive scrutiny in the courts does not convince Democrats, who from the outset have charged that Trump's order is simply anti-Muslim and plays into the hands of extremists.

"It will be used as a recruitment for terrorist organizations. It will put Americans at greater risk traveling abroad," said Democratic Senator Ben Cardin.