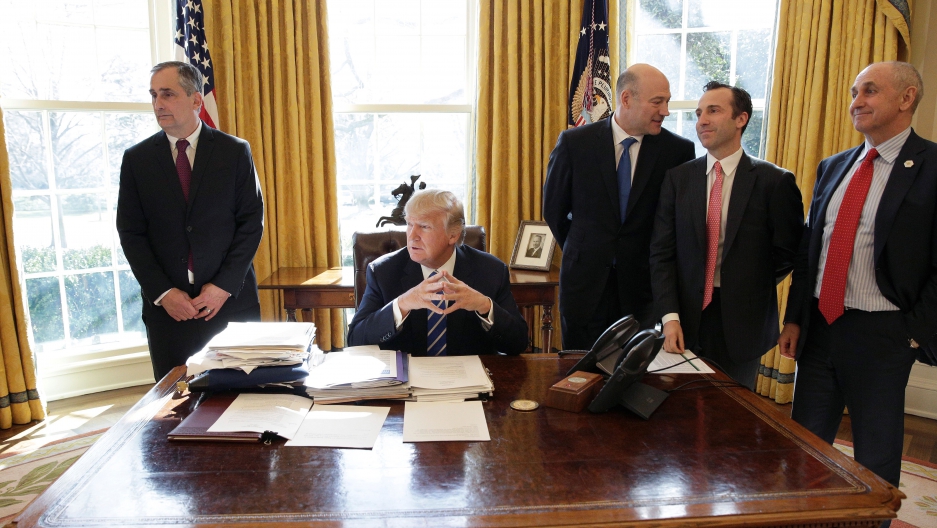 President Donald Trump meets with Chief Executive Officer of Intel Brian Krzanich (L) in the Oval Office of the White House in Washington, on Feb. 8, 2017.

In Russia, American diplomats expect their phone calls to be monitored by government intelligence. Leaks out of the White House, too, are fairly common. But sharing specifics about the president's exchange with foreign leaders? That's something of an anomaly.

And yet, just weeks into Donald Trump’s presidency, it's happening. Repeatedly. On Thursday, details of Trump’s Jan. 28 phone conversation with Russian President Vladimir Putin were brought to light in a Reuters report from investigative journalists David Rohde and Jonathan Landay.

Anecdotes from Trump's talks with the leaders of Australia, Mexico and France have come out in a similar fashion. It could mean that Trump's own team is concerned about his moves, the Huffington Post theorizes.

In the case of the Reuters report, two top White House officials and a former official, none of whom are named, are cited as sources. They asked to remain anonymous. “We made a pledge to stand by them, we find them highly credible,” Rohde said.

Related: Russian journalists' advice to US reporters: 'Don't be nervous' and 'keep working'

The piece suggests that Trump may not have been adequately briefed ahead of his conversation with Putin. Additionally, Rohde said his sources told him that during the phone call with Putin, Trump denounced a key nuclear weapons treaty — the New START accord. The agreement, signed in 2010, imposes limits on the two countries' nuclear arsenals.

Trump’s stance on the treaty was nothing short of news: “Putin asked Trump about extending the treaty. Trump paused, according to our sources, and sort of asked one of his aides to clarify the name of the treaty or what the treaty was. And then he denounced it,” Rohde said. “He said it was a terrible deal made by President Obama and it was unfair to the American people.”

The Reuters story states that Trump said that "New START favored Russia. Trump also talked about his own popularity, the sources said."

During a briefing on Thursday, White House Press Secretary Sean Spicer first characterized the conversation between Trump and Putin as a “personal call” — and left it at that. Later in the day, however, Spicer made a stronger statement on it: He maintained that the president did, in fact, know the treaty’s name. He said Trump had simply turned to an aide for some advice.

Since there’s no recording or read-out of the men’s dialogue, there’s no telling what specifically was said. So, here is the White House “flatly denying that the president didn’t know the name of the treaty.” That in and of itself raises the question of “how well is President Trump briefed before his calls. Is his staff really preparing him as past presidents have been prepared for these calls with foreign leaders.”

"Even before we had the story, we heard from US officials that there was this concern about the briefings he was getting," Rohde said.

It’s worth noting that during the presidential debates last year, Trump bungled some of the treaty’s basic facts, according to Rohde. For starters, Trump referred to it as the "Startup."

The 10-year treaty expires in 2020 — and some of its terms are supposed to be met by next year. “But could a Trump administration decide they're not going to implement the limits that are agreed to in this treaty, the ones that should be carried out by February 2018?”

This scenario stokes concerns about a new nuclear arms race. “The Russians are preparing these smaller warheads that could be used maybe in a battlefield setting.” Those would be used to “take out a certain amount of tanks and troops. And President Obama himself proposed a $1 trillion overhaul of the US nuclear arsenal in his 2016 budget.”

At this point, neither Trump nor Putin seems too eager to extend the treaty.

Meanwhile, the Trump administration has called these leaks “very concerning,” saying that it will get to the bottom of it.

But Rohde said the repercussions of that don't worry him. Rather, he's focused on the larger issues at hand: “I think this was an important story for the American public to know about. Arguably, there's no more important issue than nuclear weapons."

That's why he and Landay took their time pulling together their report. “We were very careful; we said what we knew and what we didn't know in the story. I know the president has said negative things about journalists. You know that's his right. He can say that. It's our job to sort of stay calm and do our jobs and report facts, facts, facts and inform the public.”