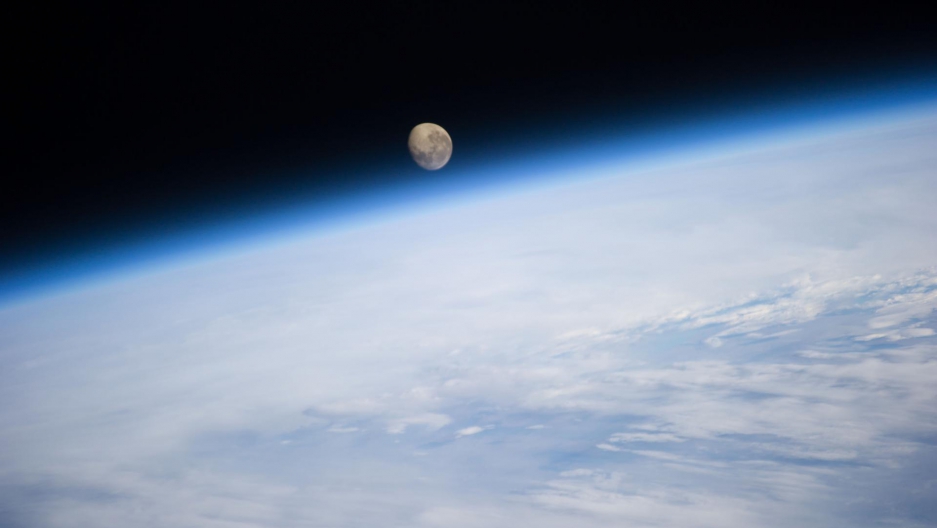 The moon setting over Earth, as viewed aboard the International Space Station, is pictured here.

Scientists say that every month, we here on Earth send some oxygen to the moon — and we’ve probably been doing it for billions of years.

The moon may be airless, but we know it has oxygen — Apollo mission samples confirmed its presence in the moon’s soil. The easiest explanation for its source is the solar wind, which bombards the moon’s surface with particles streaming off of the sun. But new research shows that the moon may be getting some of its oxygen from a more familiar place: Earth.

Japanese researchers studied data from the Kaguya lunar orbiter and found a strange variation in the types of oxygen ions hitting the moon. For five days each lunar cycle, the moon is pelted with oxygen ions that are slower and have less charge than the ions coming at it at other times. The researchers say that five-day window corresponds to when Earth’s magnetosphere blocks the moon from the solar wind.

The study, published in Nature Astronomy, indicates that slower oxygen ions going toward the moon during that window could come from the Earth’s upper atmosphere. “The provocative thing, almost, is that this presents a possibility for the preservation of Earth’s atmosphere in grains that had been out on the surface of the moon,” says Kevin McKeegan.

McKeegan is a professor of geochemistry and cosmochemistry at the University of California, Los Angeles, whose recent work has chemically dated the moon. He’s unaffiliated with the new study but explains how the researchers read the “signatures” of oxygen ions to understand where they came from.

“Oxygen is the third-most-abundant element in the sun,” he says. For most of the month, the ions blanketing the moon have a clear calling card, from the solar wind: “There is a wind that comes off the sun containing oxygen, but that oxygen is ionized several times over. So, it's at a very high-charge-state.”

But when the moon passes through Earth’s magnetic field, shielded from the solar wind, the oxygen ions pummeling the lunar surface are different, he says. “This oxygen is only ionized once, and it's at a lower energy. And therefore, [researchers] could correlate this with what would be expected to be coming off the upper atmosphere of the Earth.”

While it’s likely that we’ve been donating oxygen to the moon for billions of years, McKeegan says the loss is nothing to worry about. “When you put it in terms of number of atoms, it sounds like a great deal," he admits. “They detect something like 30,000 ions per square centimeter, per second. … But in terms of the accumulated mass, it's not very much.”

But on the moon, the oxygen ions make an impact — literally. On Earth, our atmosphere keeps us safe from the bombardments of space, McKeegan explains. But when oxygen ions strike the airless moon, he says they have enough energy to implant just below its surface, in the crystalline lattices of mineral grains.

Ultimately, McKeegan says, a key tenet of lunar research is that “what happened to the moon, happened to the Earth.” To him, this new study takes that principle a bit further.

“It’s … saying that material from the Earth could be preserved on the moon,” he adds. “And especially gases, right, which wouldn’t stick around on the Earth for very long before getting mixed up. So that's really something new and something very exciting.”