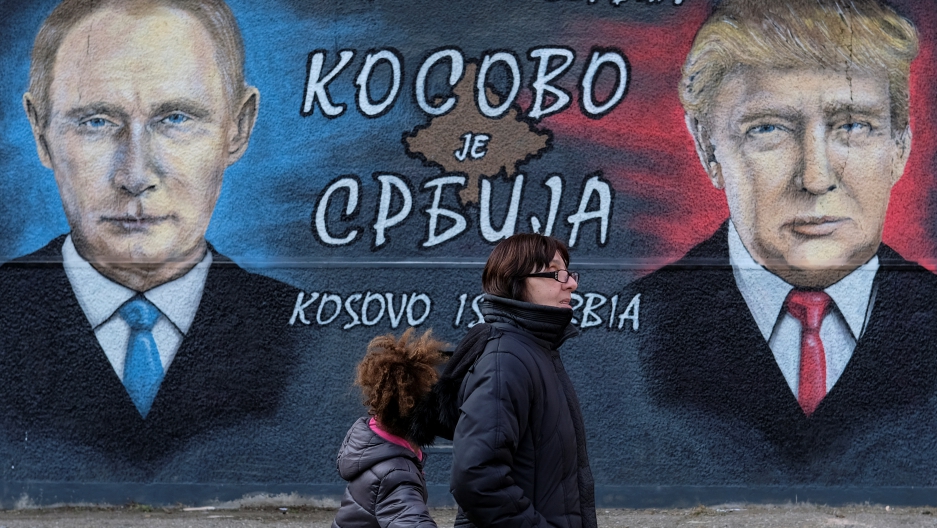 A mural of then President-elect Donald Trump and Russian President Vladimir Putin in Belgrade, Serbia, December 4, 2016.

Russians are swooning over US President Donald Trump — at least some Russians are.

"He's like a new national hero, more popular than [Russian President Vladimir] Putin," says Sasha Chernykh, of the independent newspaper Kommersant in Moscow. "We have a very big machine of state propaganda, TV propaganda. Our authorities hate [President Barack] Obama because of sanctions, and because of propaganda most Russians think that Donald Trump is an honest guy, and he's great."

Trump's popularity in Russia isn't mysterious. He's called for better relations between Washington and Moscow and has suggested he might loosen US sanctions imposed after Russia's incursion into Ukraine. That could give a big boost to the Russian economy.

But Russian journalists are skeptical that the two leaders will establish a close, working relationship. So says Lilia Lapparova, a correspondent and producer with Dozhd television in Moscow.

"I don't really think there will be a lasting bromance between them," Lapparova says. "They're both impulsive, and some day someone will make a mistake, will say something harsh and that will be the end of the relationship."

"We have a good proverb in Russia: two bears, too much for one forest," he says.

Comparisons between the leadership styles of the two heads of state are likely to continue. US journalists look at the limitations on their Russian counterparts and wonder if that's what's in store for American reporters. Those fears were compounded when White House strategist Stephen Bannon recently described reporters as "the opposition party," and called on the media to "keep its mouth shut and just listen for a while."

Anton Mukhin, deputy editor for Gorod magazine in St. Petersburg, says based on his experience in Russia, he'd be surprised if US journalists continue to find an avid audience for coverage of official wrongdoing.

But fatigue or not, Chernykh says independent journalism is alive and well in Russia.

"We are not North Korea, we are not China, and we are even not Turkey now," he notes. "If you have a good story about corruption and so on, you can publish it. But your owner can find a way to close your newspaper or something like that. Our people know that we have corrupted authorities, that's okay for them."

Lapparova offers some advice for US journalists wondering how they'll cover a Trump administration.

"You should be first of all stubborn and remember Trump's administration has already advised your media to shut up," she says. "So the only advice in this situation is not to shut up, even if you are asked politely."

Chernykh says he doesn't understand exactly what American journalists are worried about.

"It's looking like [the] United States is finding a new celebrity like Lady Gaga or Paris Hilton or something like that. You have a new president, yes? He's strange. Okay. But you have had many bad presidents in your history," he says. "Just keep the fight, keep working and I'm absolutely sure that just now some journalist in your country is writing an article which will be like Watergate. So just don't be nervous."