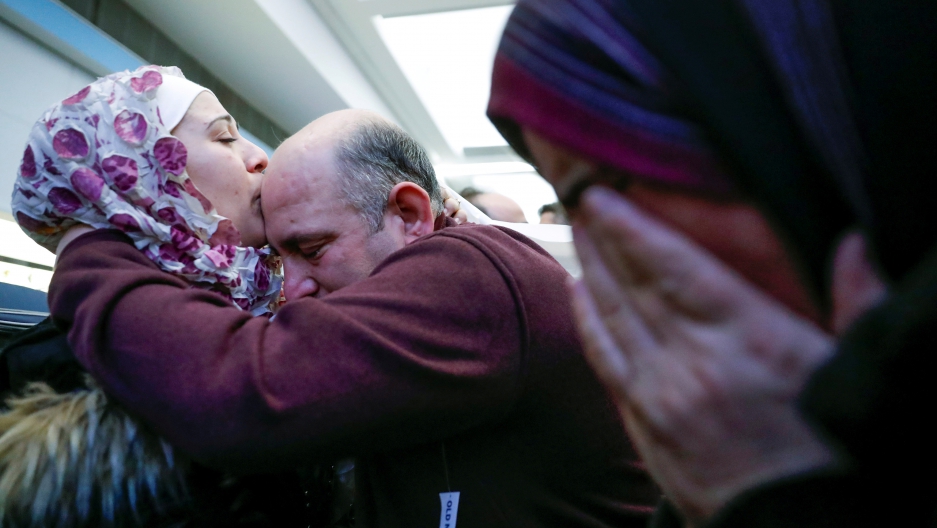 US President Donald Trump got a lot votes from Americans who go to church on Sundays.

White evangelicals picked Trump over Hillary Clinton by a four to one ratio. And large numbers of Roman Catholics went for the Republican candidate, too.

But many Christian leaders are not happy with the administration’s ban for refugees and people from seven Muslim majority nations, which is currently suspended by a federal court decision.

Evangelical figures from all 50 states published a letter this week calling on President Trump and Vice President Mike Pence to rethink their four-month moratorium on refugee resettlement. The letter started with 100 signatures.

By Friday afternoon, more than 4,700 people had signed their names.

The letter campaign was initiated by World Relief, a Christian organization that has helped more than 300,000 refugees of all faiths start new lives in America. The president of World Relief is Scott Arbeiter, who's based in Milwaukee.

Arbeiter says the point of the letter was to provide a voice for the approximately 65 million refugees around the world, and the Christian population in the US.

“For many Christian leaders around the country who’ve been engaged in refugee ministry for decades, this travel ban was not only threatening people who were so vulnerable already, but it was limiting our ability to live our core Christian conviction, which has been a part of our calling for 2,000 years,” Arbeiter says.

That calling is based on the teachings of Jesus that say to love your neighbor and help the stranger, the vulnerable and the alien, Arbeiter says.

But the Trump White House characterized the travel ban as a vital measure to keep America safe from terrorism.

Sebastian Gorka is an adviser to the president and a former editor at Breitbart News. In a recent interview with The World, Gorka said the vetting procedures for people entering the US are so inadequate that it is hard to know where to start.

“In some cases, a visa interview lasts 60 seconds. I mean, we could go on and on and on,” Gorka said. “The system was broken and it was catastrophically broken in terms of vetting threats from non-threats.”

In fact, it routinely takes refugees well over a year to be vetted for acceptance in the US.

Arbeiter says he is not sure what Gorka was referring to, and pointed out that the process of vetting refugees is a rigorous one.

“You test the quality of a program by its results,” he says. And according to the libertarian Cato Institute, the chances of an American citizen being killed in a terrorist attack carried out by a refugee is about one in 3.64 billion a year.

“If the Cato Institute is right, then the process must be a lot better than a 60-second interview,” Arbeiter says.

Arbeiter reckons that a lot of people are conflating what has happened in Europe with the situation in the US.

Refugees are simply not pouring across the border into the United States. They can only come here after the State Department chooses them. And even then, candidates for the refugee program still have to go through an extensive vetting process before they are given a visa.

Some evangelical Christian leaders support the travel ban. Franklin Graham, the son of the famous Rev. Billy Graham and president of Samaritan’s Purse, an international relief organization, is one of them.

On Twitter, Graham described the ban in practical terms, comparing it to locking your front door before going to bed.

Hawkins is an evangelical Christian and a visiting fellow at the University of Virginia. She says Christian teaching is pretty straightforward on these issues.

“The vulnerable, the refugee, Jesus himself was a Palestinian refugee,” Hawkins says.

“I think what Trump’s policy says is, ‘Stay out. There’s no room in the American inn for Jesus.’”

Cardinal Sean O’Malley of the Archdiocese of Boston wrote an op-ed in the Boston Globe that said, “In the face of a global humanitarian crisis, we cannot treat people as pawns in the midst of international disputes.”

Trump’s campaign rhetoric is one thing, but US policy is another, says Arsalan Iftikhar.

Iftikhar is a human rights lawyer and the author of “Scapegoats: How Islamophobia Helps Our Enemies & Threatens Our Freedoms.” He says it’s reassuring to hear religious leaders from many different faiths publicly denounce what he sees as a policy aimed squarely at Muslims. The Trump administration has denied that's the case, though at least one Trump surrogate has indicated otherwise.

“An attack on one religion is an attack on all religions here in the United States,” Iftikhar says.

“We live in a pluralistic society and we’ve seen historical demonization of minority groups since the beginning and the birth of our nation. One of the reasons that my book on Islamophobia is titled ‘Scapegoats’ is because scapegoats is actually a biblical term.”

Iftikhar says it could very well be another group that’s targeted next.