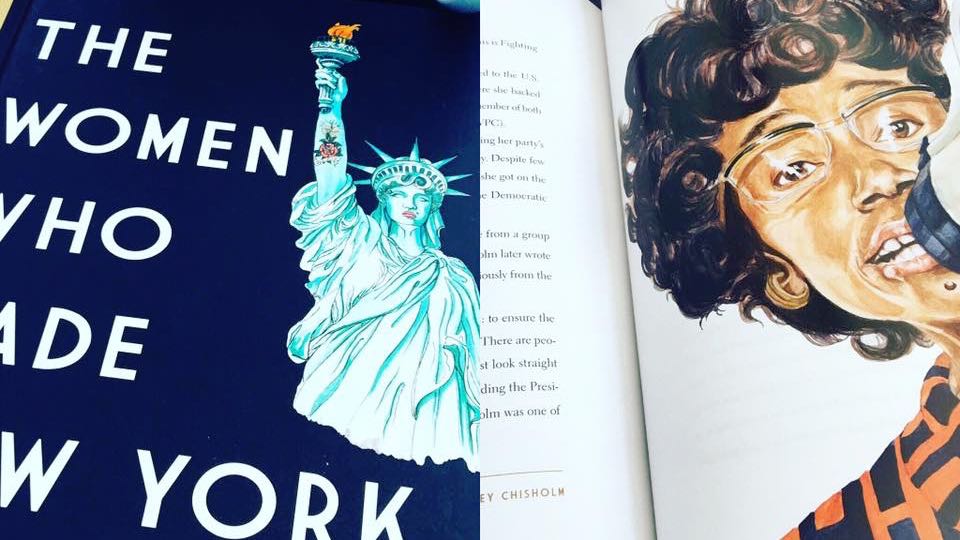 This is a spread from Julie Scelfo's book, "The Women Who Made New York."

Through the years, Donald Trump has made plenty of off-color remarks about women, including on the campaign trail. Plus, there have been allegations against him, of improper sexual advances in the workplace at various times, and more recently, reports that he pays a lot of attention to his female staffers’ appearance, spurring #DressLikeAWoman on Twitter.

The sizable Women’s March that took place last month in cities all over the world — characterized by seas of hot pink “pussy” hats — was a means of countering the president and of bringing women’s rights to the forefront. (Now, a second event from the same organizers based in New York, A Day Without A Woman, is in the works for next month.)

So, it seems timely to examine the accomplishments of female movers and shakers in New York, where so much woman-led political activism is happening; it's also Trump's hometown. Typically, when we think about the city’s past, it’s power brokers like William “Boss” Tweed, former Mayor Fiorello La Guardia or artists like Norman Rockwell that spring to mind. But a bunch of lesser-known women also made an indelible mark on the city.

They are the thrust of the new book, “The Women Who Made New York,” by journalist Julie Scelfo. The colorful volume profiles no fewer than 126 female activists, politicians, philanthropists — even criminals. Like Hetty Green, reputed to be the “Witch of Wall Street,” African American novelist Zora Neale Hurston and Broadway actor Fanny Brice. To rattle off just a few of the book’s “who’s who’s.”

But there are so many more deserving of attention. "There's no way a list like this could ever be complete," says Scelfo. "My hope is that this book is a starting point and that it will help people begin to think about the histories that have been lost and omitted from society."

As Scelfo dug into the history, here, she came across a number of women who played a powerful role in the early days of Wall Street. “I was absolutely stunned to learn about this woman, Hetty Green, who was known as the Witch of Wall Street ... it was such a terrible name,” she says.

That’s not all. Green, who lived from 1834 to 1916, was also listed in the Guinness World Records for being the most miserly person on Earth. It’s true that she was a penny-pincher and didn’t spend much on clothes. “She had a perfectly good black dress that she started wearing after her husband died. She also wore a black veil.” She just didn’t think it was worth it to refresh her wardrobe every couple of months, simply to be fashionable in the gilded age, Scelfo says.

However, in terms of her reputation, a more fitting nickname for Green may have been the “Oracle of Wall Street” because “she was so phenomenally astute at maneuvering the markets.”

That probably has something to do with her upbringing. At the age of 6, her father, an investor, insisted that she read the morning newspapers and commodities reports aloud to him every morning. Later when he died, Green inherited a small fortune: $1 million. She invested it, and eventually became one of the wealthiest people around. “And so she operated on Wall Street but the men couldn't stand her. She was so successful.”

Still, when the city had financial troubles, they turned to her. She became a personal loan agent to New York City; Green wound up bailing out the city a number of times, according to Scelfo.

Broadway has no shortage of female stars, either. For starters, Betty Comden (1917-2006) was a stellar lyricist — she wrote the iconic song, “New York New York,” for the musical, “On the Town.” “So, you know, we had to include her, and I put Fanny Brice in there because she was so pioneering and sort of bringing humor to Broadway."

Additionally, Brice, who was born in 1891 and died at 59, “was the one who helped take what was happening in the ‘Follies’ and sort of before Broadway and make it sort of part of the core of what we think about as musical theater on Broadway.”

Another important figure, here, Ethel Waters (1896-1977), is usually thought of as a singer and a musician. But she “was so successful on Broadway, that, at one time she was believed to be the highest-paid actor of any gender.” This at a time when women didn’t have parity on Broadway. “She just commanded the respect of audiences like you wouldn't believe, and without her, I think it would have been even longer until we saw any kind of integration or equality of gender or race integration.”

Venturing into the tenements

It’s impossible to pick a favorite from the mix, Scelfo says, but she did have a special affinity for Sara Josephine Baker (1873-1945), one of the first women to go to medical school and become a physician in the United States.

Baker worked for the city’s public health department starting right around the turn of the 19th century. She had a low-level job “so they would send her out to do whatever sort of, you know, junk work that nobody else wanted to do. And the tenements were just a teeming mess at this point, and a lot of her male colleagues wouldn't even go into them. They thought it was disgusting.”

But Baker was intrepid; she dressed like a man, so as not to stand out, and rolled up her sleeves, put on her boots and ventured into the tenements. Her mission: to figure out how disease was spreading, which was a big problem at the time. “It became abundantly clear to her that there wasn't basic sanitation, people couldn't wash their hands after they changed a diaper or they didn't even have diapers,” Scelfo says.

Also impressive is how Baker helped to rid the city of smallpox. She was trying to get people in lower Manhattan vaccinated but nobody could persuade the men on the Bowery to come in for that. So, she hatched a plan: At midnight one day, she met with her staff and a police officer and brought the vaccines to the men.

That’s not all. She also set up a number of practices that ultimately dropped the infant mortality rate in the city by more than 50 percent. Baker's “little mothers guilds” were instrumental; nurses would teach 7- and 8-year-old girls — little mothers — who cared for their young siblings. It was out of necessity, as their own mothers had no choice but to work to support their families.

The list goes on. Elizabeth Milbank Anderson (1850-1951), a frequent donor to projects throughout New York, opened one of the city’s first public bathhouses. Having lost her young son to disease, “she got in touch with public health folks and she said, ‘What can I do to really help.’ And they said people need a place to shower, they need a place to do their laundry. And so she built one.”