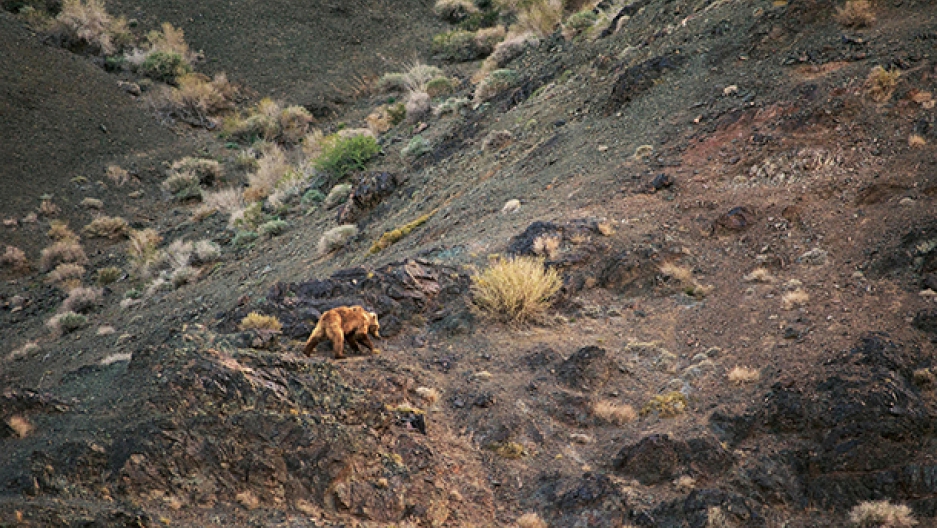 Only a few dozen grizzly bears with bright yellow coats live in the forbidding Gobi Desert in Mongolia. In a new book, wildlife biologist Doug Chadwick writes about how these unique animals survive and what can be done to better protect them.

Chadwick first found out about the Gobi grizzly (called the mazaalai in Mongolian) almost by accident. He was tracking snow leopards in the mountains of Mongolia, near the border between Russia and Kazakhstan.

“We weren't seeing any brown bears, which are the same as grizzly bears, and I had expected we might, because we were hot on the trail of snow leopards,” Chadwick explains. “My translator, who was a woman working for the Snow Leopard Trust, happened to mention, ‘We also got these other grizzly bears in Mongolia.’ And I said, ‘Where?’ And she said, ‘In the Gobi Desert.’”

Chadwick thought he and his translator had misunderstood each other, but then she told him that her father, who happened to be the director of the Great Gobi Strictly Protected Area, had studied the bears for 30 years. Chadwick’s next question was: How many of these bears are there in Mongolia? “She said, ‘About 30,’” Chadwick relates. “I said, ‘Well, that's in Mongolia. How many are there [total]?’ And she said, ‘They're all in Mongolia and nowhere else. There are 30 Gobi grizzly bears left in the world.’"

At that point, Chadwick says, he had to see them.

The Gobi grizzly is small and lean compared to the North American grizzly bear. It has “wildly mussed up hair sticking out all over the place and ... these stubby claws that say at a glance, ‘I have been walking on rocks all my life, and I have been digging through gravel to find roots, and I am a beat-up, thirsty, dusty bear on the outer edge of possibility, but I'm here.’”

Gobi grizzlies are smaller than their North American counterparts because “it's pretty hard to get big on a diet of wild rhubarb, wild onions, lizards, beetles [and] occasionally scavenging the carcass of a larger animal,” Chadwick says. “Everything is few and far between, both plants and animals.”

The environment in the Gobi is almost unbelievably harsh. In the warm season, temperatures can exceed 120 degrees Fahrenheit; winter temperatures can fall below minus 40 degrees. The bears hibernate and their annual cycle is “a lot like the bears in Montana’s Glacier National Park,” Chadwick says.

While only three to four dozen Gobi grizzlies currently exist, it looks as though their numbers have been increasing slightly — ever since a conservation effort began in 2005, Chadwick says. As to how many might once have existed, Chadwick says “that’s a little like asking how many bison or how many grizzlies used to be in North America. Nobody knows because we blew through them so quickly. There are estimates, and that's all you can have.”

Part of the conservation project involves helping the bears by feeding them — an unfamiliar and somewhat uncomfortable strategy for Chadwick. “A fed bear is a dead bear, because it learns to get food near humans and that's not a good strategy for staying alive,” he says.

Chadwick and the other researchers dump sacks of livestock chowder into a big bin with a trough on the bottom and put it near an oasis. “The bears don't depend on it, but there are a lot of drought years, and it's not getting any better in a warming, drying climate,” Chadwick says.

So far, their efforts seem to be paying off.

“[They’re] on the upswing, and some of the happiest moments of my life have been standing out there, even in a dust storm and bitter cold winds, checking the images on the automatic camera set up near the feeder,” Chadwick says. “As you scroll through them, all of a sudden, there are two baby bears with their mom — so they are reproducing.”