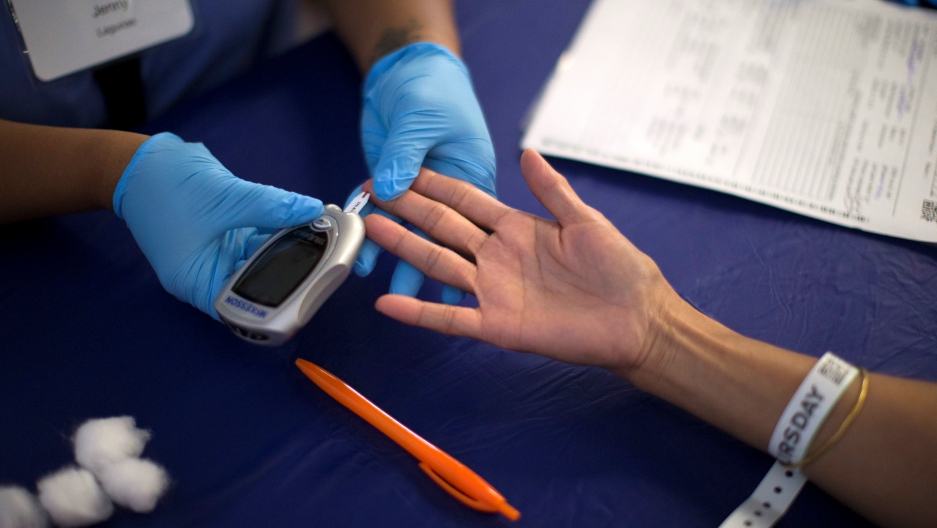 A patient receives a test for diabetes during the Care Harbor LA free medical clinic in Los Angeles, on September 11, 2014.

Here’s a startling figure: More than half of Asian Americans with Type 2 diabetes don’t even know they have it. That compares to one in four Americans with the disease overall who are unaware. Even though the American Diabetes Association changed its screening guidelines for Asian Americans, a large number are still going unscreened.

At the South Cove Community Health Center in Quincy, Massachusetts, Dr. Qiyue Hu conducts a checkup with his patient Jiping Chang. Chang is 76 and was diagnosed with Type 2 diabetes in 2009. He tells me that at the time, he was surprised. That's because “I didn’t have any symptoms. I felt OK,” Chang says.

He wasn’t overweight either, traditionally a warning sign for Type 2 diabetes. But it turns out that isn’t uncommon among Asian Americans who develop the disease. In fact, they are two times more likely than whites to develop diabetes, despite having lower obesity rates. This isn’t a surprise to physicians who treat mostly Asians. But it was news to Dr. Hu when he relocated to Massachusetts over a decade ago. That’s because back in Pennsylvania most of his patients were white.

“I came here and more than 90 percent are Asian patients here. I initially found some Asian people had diabetes, and they were not obese,” says Hu. “They were thin. Before I came here, I didn’t know that there was a significant difference between Caucasian and Asian.”

That difference is so significant that two years ago, the American Diabetes Association changed the screening guidelines to recommend Asians are screened for diabetes at a lower body mass index, but that didn’t necessarily result in more screenings, according to Elizabeth Tung, a physician at the University of Chicago. She recently wrapped up a study looking at the disparities in diabetes screening between Asian Americans and other adults.

Tung wanted to know why. Using data from the Centers for Disease Control and Prevention, Tung and her team studied the responses of more than half a million Americans. They looked at all kinds of characteristics, including education level, insurance status and access to health care. They even looked at factors such as patient satisfaction and whether Asian Americans are more averse to screening in general — but none of it explained the discrepancy.

“So that essentially left us with this question of whether or not there was something going on in the clinical encounter between Asian American patients and their physicians. And that’s essentially when this can of worms with implicit bias gets opened,” says Tung.

Implicit bias has to do with the subconscious judgments we make that are often based on stereotypes. Going into this study, Tung hypothesized that implicit bias could be a factor because the prevalence of undiagnosed diabetes in Asian Americans is so high. But implicit bias is very hard to prove, and it means admitting that there’s a tiny elusive jerk in all of us.

It goes back to the model minority myth. You know, the one where Asian Americans don’t do drugs, don’t commit crimes and are really healthy.

“I do think that a lot of people out there think that Asians likely eat healthier because they likely eat a diet of vegetables and rice or fish and rice,” says Tung. “And you know, as an Asian American, I know that that is not true.”

If implicit bias is the culprit, the medical establishment has been very slow to accept it, says Dr. Ana Pujols-McKee, chief medical officer of the Joint Commission, the nation’s largest national accreditor and certifier of hospitals, nursing homes, health clinics — you name it.

“It exists in the judicial system, in every aspect of our society, in every industry,” Pujols-McKee says. “But to reject the idea that there is bias, that physicians and nurses and clinicians are somehow above that is false.”

She says there’s a certain resistance to accepting that implicit bias exists in health care because it goes against the Hippocratic oath.

“If I say I’m biased, that means I haven’t been fair to some patients. And that’s a very difficult nut to swallow. Because for those of us who have sworn that we are only going to help and not hurt anyone, it means that somehow we allowed ourselves to hurt someone,” says Pujols-McKee.

The good news is there are a number of organizations that are taking on addressing implicit bias and health disparities. Back at South Cove Community Health Center, Dr. Hu is also doing his part — though for him it’s pretty straightforward.

The gist of those guidelines — if you’re over 45, make sure you get screened, regardless of your ethnicity. If you’re under 45, overweight and a minority, get screened. Right now there’s this huge population out there walking around not knowing they have Type 2 diabetes.

As for Hu’s patient, Jiping Chang, he says that he exercises, listens to his doctor and controls what he eats — there’s even a Chinese saying for it: “Control your mouth and move your legs.”

Words to live by.

Also: Too much boba is bad for you. California's new data law could show who’s most at risk.