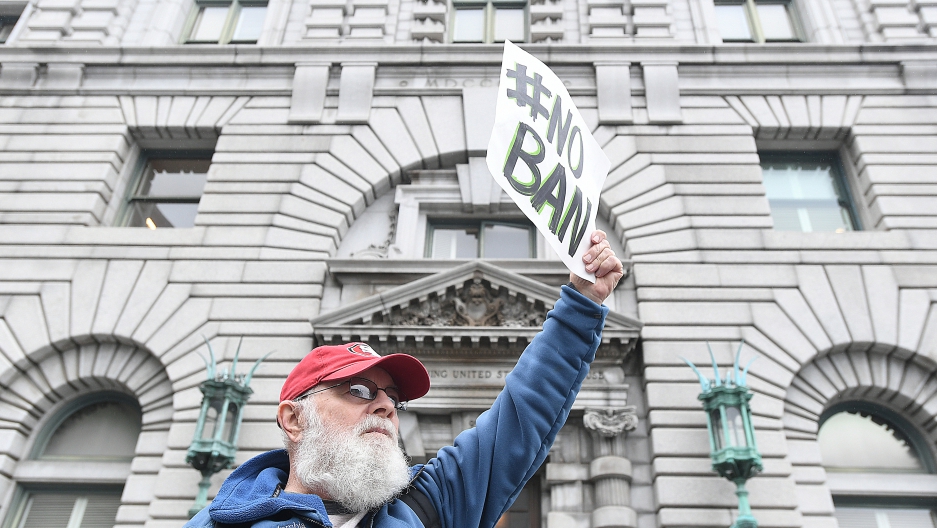 David Pearce protests outside the 9th Circuit Court of Appeals courthouse in San Francisco on Tuesday, Feb. 7, 2017. A three-judge panel heard arguments on the halt to President Donald Trump's executive order banning all refugees and immigrants from seven countries. On Thursday evening, the panel ruled unanimously to continue the suspension of the order.

A federal appeals court has unanimously decided: President Donald Trump's executive order to bar all refugees and immigrants from seven countries will continue to be suspended.

"We hold that the government has not shown a likelihood of success on the merits of its appeal, nor has it shown that failure to enter a stay would cause irreparable injury," the 9th Circuit Court of Appeals in San Francisco ruled. The decision cites the potentially irreversible harm the order could do to the state of Washington — which brought the suit — if courts ultimately find the order to be unconstitutional.

The court denied the government's request to reinstate the measure on an emergency basis, meaning a lower court suspension of the travel ban stands for now.

A panel of three judges held a contentious hearing in the matter on Tuesday, with the lawyer representing the Trump administration insisting the controversial ban was justified for national security reasons. Trump immediately vowed a legal fight to defend his controversial order.

"SEE YOU IN COURT, THE SECURITY OF OUR NATION IS AT STAKE!" Trump tweeted, shortly after decision.

SEE YOU IN COURT, THE SECURITY OF OUR NATION IS AT STAKE!

For immigration law experts, though, this is just the first of many legal battles to come. César Cuauhtémoc García Hernández, an immigration and criminal law professor at the University of Denver, says "this is just round one."

"The State of Washington still needs to convince the court that President Trump's executive order is unlawful," Hernández said in an email. "We can expect the Justice Department to quickly appeal. Meanwhile, it is worth remembering that there are similar lawsuits pending in other courts so we can expect to see more orders appear in the coming days. They each take slightly different approaches and present slightly different legal arguments. What they share, though, is a clear illustration that many people believe in the power of law to defend targeted populations."

And why certain people are targeted continues to be a subject of debate.

When President Trump unveiled his travel ban on Jan. 28, the banned countries included Libya, Syria, Yemen, Iran, Iraq, Somalia and Sudan. But many other countries with a history of violence toward the West, and most of those convicted of terrorism on American soil — from Pakistan, Afghanistan, Saudi Arabia and Egypt — weren't on the list. Why not?

According to Shibley Telhami, the Anwar Sadat Professor of Peace and Development, the reasons could be ideological. While Trump does do business in some of the countries the ban failed to name, Telhami says the president’s motives go beyond that.

“You can make an argument that he is more ideologically in line with the rulers of these countries," says Telhami. “For example, the Egyptian government is very high on Mr. Trump, they think that he’s very responsive to them. He is in harmony with their view on what needs to be done particularly with fighting Islamic militancy.”

Countries like Egypt and Jordan are also US allies, and Trump is on friendly terms with their leaders. “There is some ideological overlap,” says Telhami. “He knows these rulers, he’s comfortable with them, they share a strategic vision and he sees them as an asset for the war on ISIS.” Telhami’s own polls show that Americans rank fighting ISIS as a top foreign policy priority, while some recent polls find that Trump's travel ban is popular.

Today's court decision was explicit in its relationship to security concerns, though: "Indeed, federal courts routinely review the constitutionality of — and even invalidate — actions taken by the executive to promote national security, and have done so even in times of conflict," it reads. It goes on to cite rulings that restricted powers of the president after 9/11 and during World War II, such as the incarceration of people of Japanese ancestry. "In short, although courts owe considerable deference to the President’s policy determinations with respect to immigration and national security, it is beyond question that the federal judiciary retains the authority to adjudicate constitutional challenges to executive action."

Trita Parsi of the National Iranian American Council says that his organization will also keep fighting Trump's immigration policy. "At the end of the day it's not the end of the road, regardless of the decision," he says. If the government ultimately wins this battle in court, he worries that Iranian Americans will have some difficult choices to make. Among the provisions of the order is that countries cooperate with the US to provide information on visa applicants and refugees. Iran, Paris says, will never do this and the temporary restriction in the order could become permanent.

"If that happens," Parsi says, "what does that mean to be Iranian American in the United States?"

Parsi's organization joined a lawsuit filed this morning against Trump's order. In a joint statement, the Iranian Americans contesting the ban say it "illogically categorizes everyone of Iranian descent as a potential terrorist."

The American Civil Liberties Union is also ready to continue legal battles against Trump's policies. Deputy legal director Cecillia Wang promptly wrote back to Trump on Twitter that, indeed, security and liberty are at stake. "That's why we'll keep seeing YOU in court," she wrote.

True. Our nation's security, liberty, and constitutional form of govt are at stake. That's why we'll keep seeing YOU in court, Mr. Pres. https://t.co/N03snHJMRP