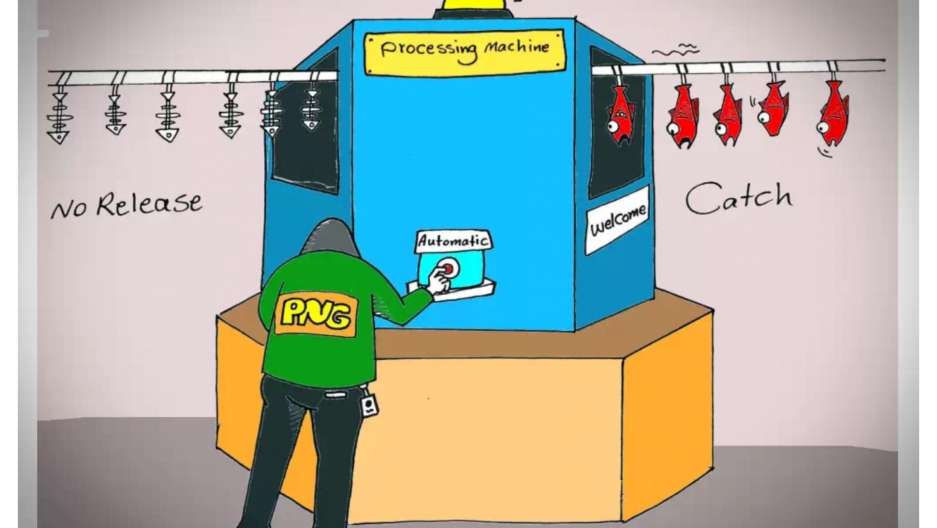 This cartoon by Eaten Fish is playing off the name of the Australian-funded offshore detention camp in Papua New Guinea where the Iranian cartoonist is being held. It's called the Manus Regional Processing Centre but many hundreds of the aslylum seekers there, including Eaten Fish, have never been processed. They've languished there for more than three-and-a-half years.

UPDATE: This story was originally published on Feb. 9. On April 22, 2017, the Trump Administration said it would honor an Obama-era agreement with Australia,

under which the United States would resettle up to 1,250 asylum seekers stuck in offshore processing camps on two South Pacific islands: Manus in Papua New Guinea and the tiny island nation of Nauru. Back in January, President Donald Trump described the deal as "dumb".

In Sydney, Vice President Mike Pence said the deal would be subject to vetting and that honoring it "doesn't mean we admire the agreement." Part of the agreement is that in return for the US taking the refugees from Manus and Nauru, Australia will resettle some refugees from El Salvador, Guatemala and Honduras who are in refugee camps in Costa Rica.

This means that Abdul Aziz Muhamat, who has been in the detention camp on Manus Island for almost four years (and the subject of our story below), has a good chance of being resettled in the United States. We will continue to monitor the story.

Update: This story was originally published on Feb. 9. On Feb. 18, Iranian asylum-seeker and cartoonist Eaten Fish ended his hunger strike. He hadn't eaten for 19 days. Eaten Fish has been held in an Australian-funded detention camp on Manus Island in Papua New Guinea for more than 3 1/2 years.

It's strange to be messaging with someone in a detention camp in a remote corner of the South Pacific who's slowing dying. But that's exactly what I've been doing.

The person I message with began his hunger strike on Jan. 31. By the 10th day, Feb. 9, he weighs about 104 pounds. He's an asylum-seeker from Iran and goes by his cartoonist pen name: Eaten Fish. He has been in detention for 3 1/2 years now, and he's losing hope.

In one message, he tells me the story behind his name: "I'm like a fish bone," he wrote. "Gotten from the sea. Eaten and thrown away for so long." 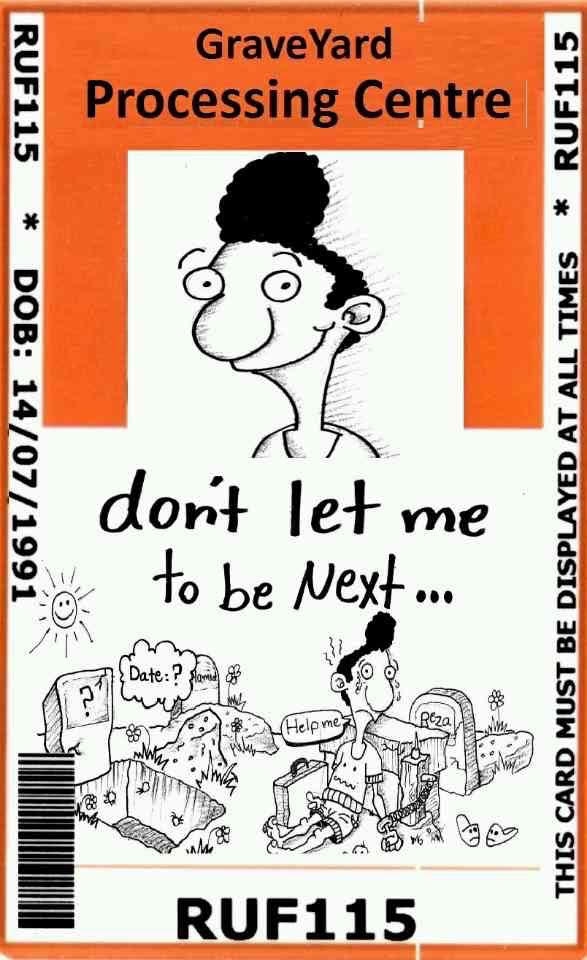 After leaving Iran, traveling overland to Indonesia, and boarding a smuggler's boat, Eaten Fish had the bad luck of landing on an Australian island in August 2013. That was just one month after Australia started banning entry to any asylum-seekers arriving by boat. He was put on a plane and taken to an offshore detention camp on Manus Island in Papua New Guinea. He's been there ever since.

Manus Island, just south of the equator, is about as remote as you can get. It's small, poor and sparsely settled. Eaten Fish is in a detention camp there with about 800 other men in the remnants of a former World War II naval base. Douglas MacArthur spent time there. Australia pays Papua New Guinea to host the camp and contracts with outside companies to provide guards, meals and other services.

The New York Times' Roger Cohen traveled to Manus Island last year to report on the camp. He tried for months to get a journalist's visa, but finally gave up and traveled there on a tourist visa.

"Holding people in complete limbo for three-and-a-half years is a terrible thing to do. They are mentally crippled. They don't really believe in anything anymore," he says.

Cohen says the camp at Manus Island is surrounded by barbed wire. The accomodations are a mix of pre-fab containers and tents. He didn't meet Eaten Fish, but he did speak to several other men from the camp who have also been there for more than three years.

"They've seen one of the refugees was killed. Another has died through negligence. At least a quarter of them are suffering from various forms of depression," Cohen says. The camp was supposed to be a processing center for asylum claims — not a long-term detention facility — but most of the men there have never been processed. Australia is holding to its strict "no boats" policy of preventing any asylum-seeker who arrived by boat to ever settle in the country. But Cohen thinks Australia should make an exception for these men, and the women and children in Australia's other offshore detention camp on the island nation of Nauru.

The detainees from both of Australia's offshore camps, numbering about 1,250, were to be settled in the United States under an agreement struck between the Obama administration and the Australian government of Prime Minister Malcolm Turnbull. But President Donald Trump's recent comments that the plan is a "dumb deal" suggest that might not happen. 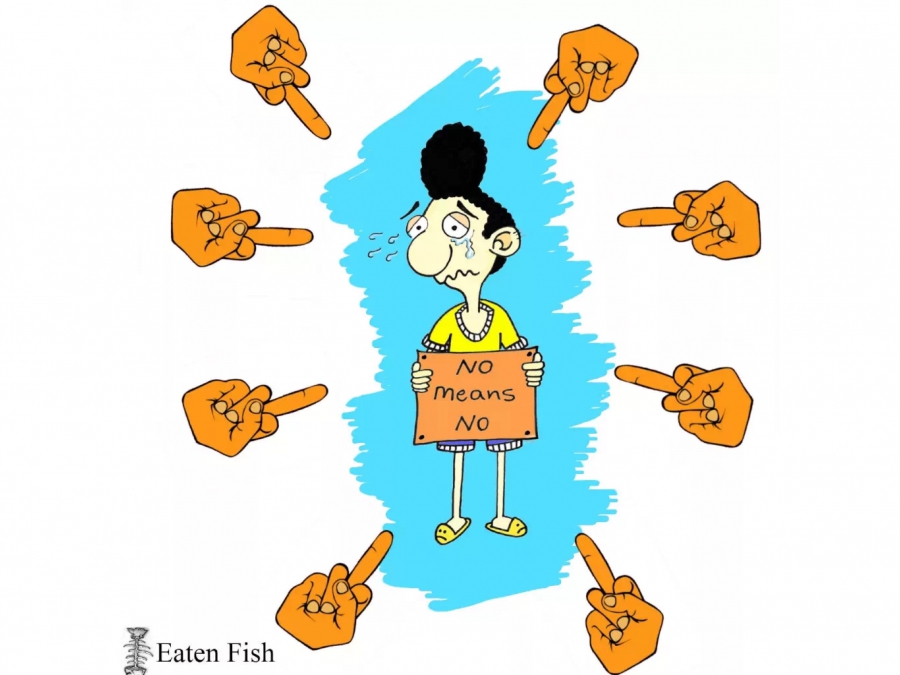 Australian cartoonist Andrew Marlton, known by his pen name First Dog on the Moon, has kept in touch with Eaten Fish for the past two years through messaging apps and the occasional phone call. He advocates for Eaten Fish to be brought to Australia for medical help. He also helps Eaten Fish with his cartooning and acts as a sounding board. "Admittedly, it was a bit hard to talk about cartooning because he was indefinitely detained in what is pretty much a tropical gulag, with no real hope of being sent somewhere where he could get on with his life," Marlton says.

As I'm talking to Marlton, he gets a message from Eaten Fish: "Nobody understands my pain. How can I decribe it?"

Listen to our previous reporting on Eaten Fish's hunger strike:

Eaten Fish suffers from various physical and psychiatric maladies. He says he's been harassed and sexually assaulted during his years of detention. In a message he said: "People [taking] advantage of me because of the female style I have." 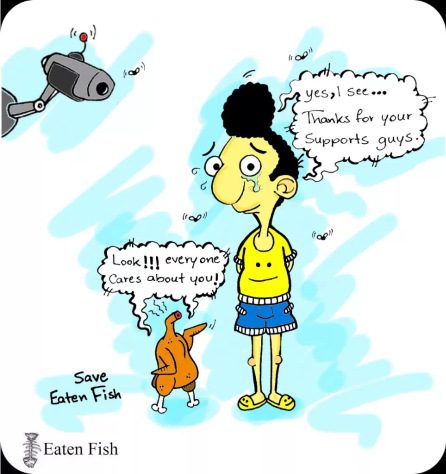 On Feb. 5, day six of Eaten Fish's hunger strike, Cartoonists Rights Network International, a human rights group, issued a statement from its executive director. It read: "It is with profound alarm and sadness that we learn our friend and colleague, winner of last year’s Courage in Editorial Cartooning Award Eaten Fish, currently held in an Australian refugee rendition camp in Papua New Guinea has decided to undertake a hunger strike. He is a man who has given up hope, cannot struggle any longer, cannot face the future that is being forced on him, and would rather die than submit to the indignities of further inhuman treatment."

Senator Scott Ludlam, a member of Australia's Green Party, has been working on Eaten Fish's behalf to bring the cartoonist to Australia. He says there's been no reliable information on Eaten Fish's condition since Feb. 15. "We're obviously very concerned. Part of the problem is it's actually quite difficult to get reliable information off these islands. A couple of years ago, the Australian government imposed a media blackout on Manus Island and on the island nation of Nauru."

In an email addressing the case of Eaten Fish, a spokesperson for Australia's Department of Immigration and Border Protection said: "The Department does not comment on an individual's medical circumstances. Appropriate medical care is available at the Manus regional processing center including a mental health clinic currently staffed by psychologists, counsellors and a psychiatrist." 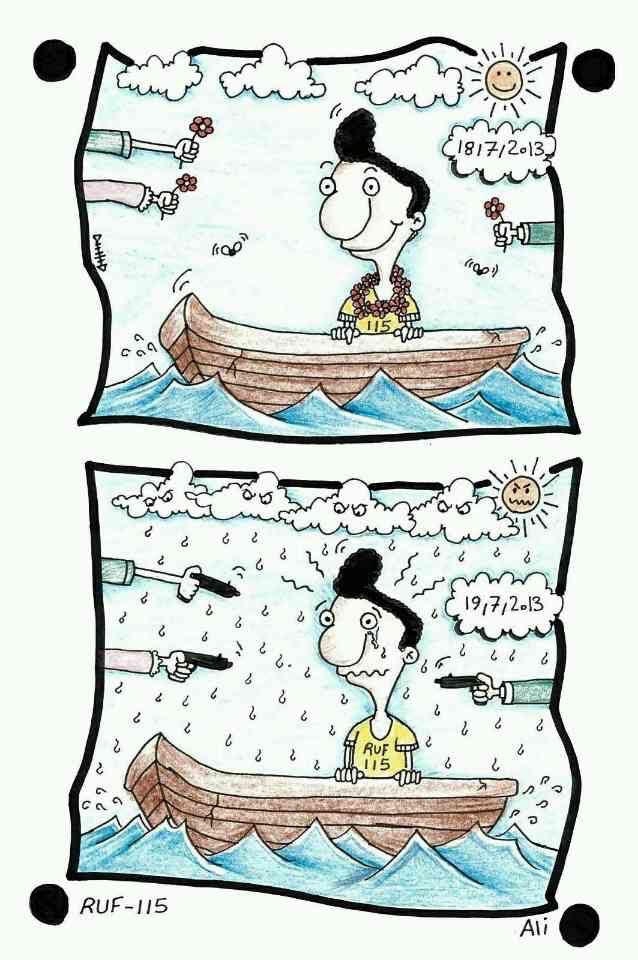 Eight months ago, officials at the camp moved Eaten Fish to a special compound to protect him from harassment. In a message, Eaten Fish told me he has guards and a camera monitoring him at all times, even when he goes to the bathroom.

For company, Eaten Fish relies on his smart phone. "He has a Facebook page and an Instagram account," says Marlton. "This is what's so weird about the world now. You can be in a tropical death camp, being slowly driven insane, but they still allow them access to Facebook and the internet.

In October, Papua New Guinea rejected Eaten Fish's refugee claim. He's been told he must return to Iran. His supporters say he was too ill to take part in the assessment interviews and that he would be in danger if he returns to Iran.

My latest message from Eaten Fish says this: "I only want to be somewhere safe. I want to have [the] right to feel safe when I walk on the street."

I haven't heard from Eaten Fish since February 14th.

Cartoonists around the globe have drawn images in support of Eaten Fish. You can see them here. Save Eaten Fish is a group that's advocating on behalf of Eaten Fish and is providing updates on his condition.

Correction: An earlier version of this story misspelled the last name of Andrew Marlton.