The casual observer — or beachgoer — probably doesn't give too much thought to the reproductive lives of seahorses.

After all, it’s a classic storyline, right? Boy seahorse meets girl seahorse, seahorse gets pregnant, and a few weeks later, a bouncing brood of baby seahorses are born.

But that would be skimming over the coolest part about seahorse reproduction: “They're the only vertebrates — seahorses and pipefish, a group of about 300 species — where the males become truly pregnant,” says Luke Groskin.

Groskin is Science Friday’s video producer, and he recently visited the Brooklyn College lab of evolutionary biologist Tony Wilson. There, Groskin got a peek into the fabulous, weird world of seahorse reproduction — including the birthing process. 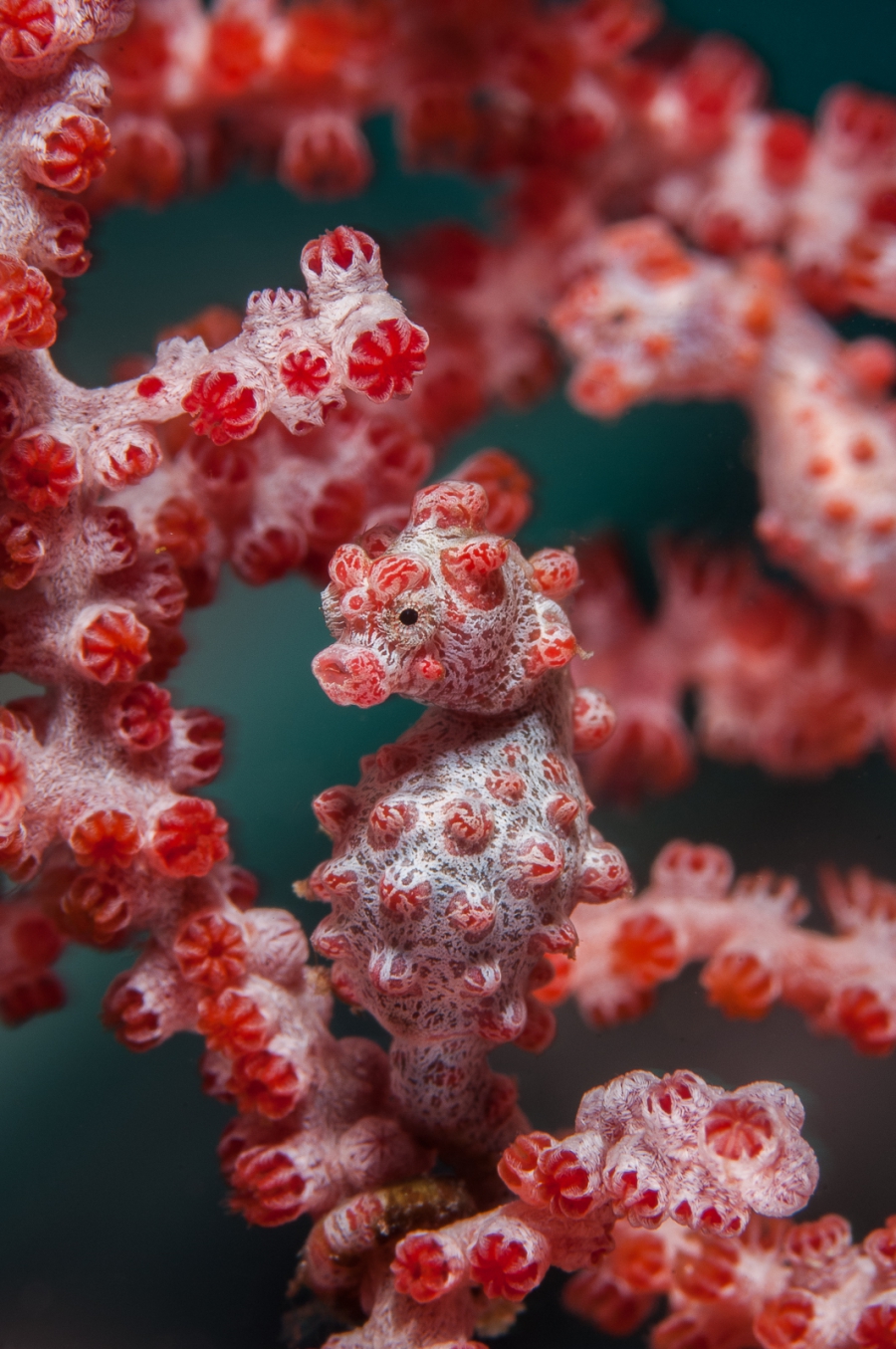 Bargibant’s pygmy seahorses are perfectly camouflaged to match the gorgonian sea fans they live on.

“It's all these adorable, beautiful little seahorses coming out,” he explains. “But the male’s going through these straight-up contractions. It's bending its body over, it’s seriously in labor, and it's forcing out, in some species, thousands of little babies out of its pouch. It’s just spraying babies out.”

To get to that point, Groskin says female and male seahorses go through a mating ritual, which includes an actual dance that’s “very romantic.” Then, the female seahorse deposits her eggs inside the male’s pouch, which looks like a little belly, “not like a kangaroo pouch.”

Once the male fertilizes the eggs, many details of the pregnancy sound, well, kind of familiar to mammals like us. For one, Wilson says there’s a close connection between the male seahorse’s blood supply and his pouch.

“And then the male regulates the internal environment,” Wilson explains. “He provides oxygen to the embryos during their development, he regulates the salinity such that when the offspring are released, the salinity within the pouch and outside the pouch is identical. He has contractions, which are very similar to what we see in terms of labor in humans. And once the offspring are released, you have little baby seahorses, which are completely free living.”

And those aren’t the only parallels, Groskin adds. “[Wilson’s] research has actually shown that about 5 to 10 percent of the genes that are involved in seahorse pregnancy are involved in … pregnancy in other vertebrates, including mammals.”

In fact, Groskin says that one suite of genes found in pregnant seahorses helps regulate prolactin — the hormone that promotes milk production in mammals. “And what is a male seahorse doing with prolactin?” he asks.

As it turns out, there’s a lot we still don’t know about the how and why of male seahorse pregnancy. For one, scientists aren’t even sure how seahorse embryos become male or female in the first place. While in some fish, environmental factors like temperature can determine sex, Groskin says researchers haven’t found genetic evidence for sex determination in seahorses: “They don’t know how a baby seahorse becomes male or becomes female.”

“And so … it's not really clear exactly how this system actually works,” he adds. It’s a sentiment that holds from seahorse birth to reproduction: “If you look at the behavior of some of these species, the females are actually competing for the males, and everything is just completely topsy-turvy. It's a complete mystery, this whole system.”

This article is based on an interview that aired on PRI's Science Friday. (Read more about the private lives of Bargibant’s pygmy seahorses on Science Friday’s website.)