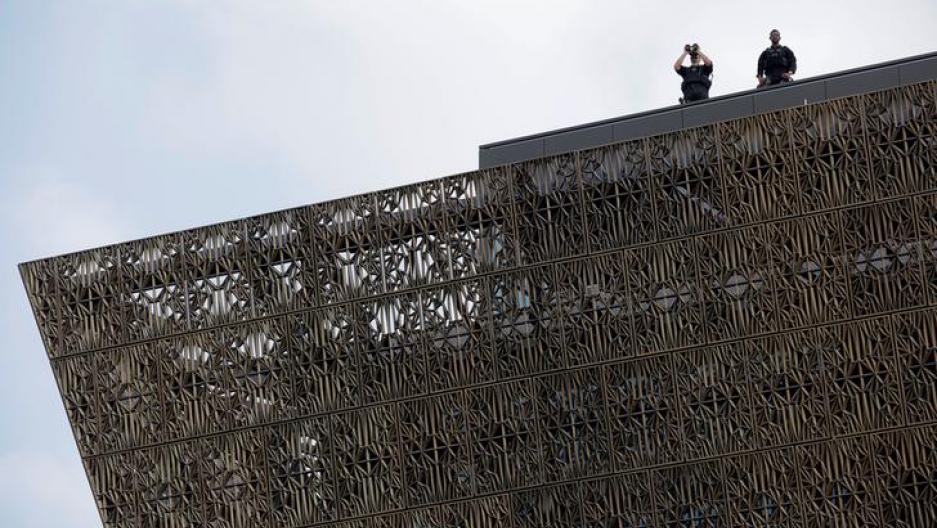 During the dedication of the Smithsonian National Museum of African American History and Culture, two Secret Service officers survey the crowd from the roof of the Museum on September 24, 2016.

Mr. President, will you reschedule your visit to the new Smithsonian National Museum of African American History & Culture?

The Museum contains about 40,000 objects that curators collected from across the country. About one-tenth of the objects in the collection are on display in the museum’s opening exhibits. They include relics from cotton plantations, the possessions of both everyday people and historical figures like Nat Turner, Harriet Tubman, Frederick Douglass, and Abraham Lincoln, as well as cultural artifacts from the from the antebellum era through the Civil Rights Movement and into the present.

Founding director of the NMAAHC, Lonnie G. Bunch III, has said that “the African American experience is the lens through which we understand what it is to be an American.”

It’s a powerful statement, in Black History Month or any other time — and one that seems to resonate.

As of February 1, more than 900,000 people have gone to the NMAAHC in the four and a half months since it opened. In fact, so many people are eager to visit that guests can now only enter the museum with timed entry passes.

But President Donald Trump has yet to visit the museum.

In the days before his inauguration, Trump was scheduled to visit the NMAAHC in observance of Martin Luther King Jr. Day. But he abruptly canceled his visit after Congressman John Lewis — a civil rights activist who first introduced a law to create a Smithsonian museum of African American history in 1988 — questioned the legitimacy of Trump’s presidency.

While Trump hasn’t checked out the museum, his predecessors have.

“First, it shows our commitment to truth. A great nation does not hide its history…Second, this museum shows America’s capacity to change…And finally, the museum showcases the talent of some of our finest Americans.”

President Barack Obama, who also attended the dedication, called the museum “necessary” because it:

“...Helps to tell a richer and fuller story of who we are. ... By knowing this other story, we better understand ourselves and each other. It binds us together. It reaffirms that all of us are American, that African American history is not somehow separate from our larger American story. ... It is central to the American story.”

Since then, President Trump’s remarks commemorating the first day of Black History Month has caused many to question his commitment to African Americans and wonder just how interested he actually is in African American history and culture — especially after some particularly odd remarks about Frederick Douglass, one of the most iconic figures in American history.

During those remarks, Trump acknowledged the museum when he said that he was “very proud now that we have a museum on the National Mall where people can learn about Reverend King, [and] so many other things.”

So, Mr. President, when will you reschedule your visit? Click here to tweet this question to the president.