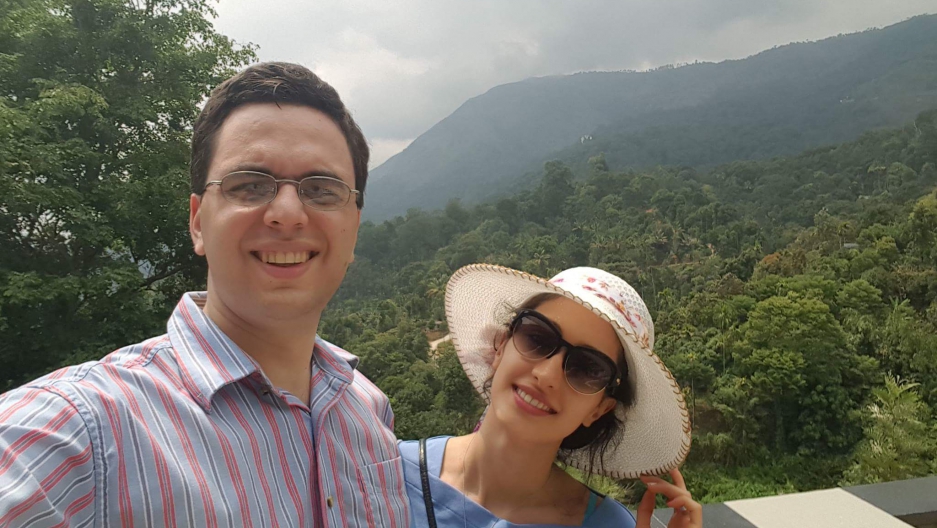 Omid Moghimi and his wife Dorsa Razi have been separated by Trump's immigration order.

Omid Moghimi is an Iranian American, a citizen of the US. He grew up here. The 28-year-old physician is doing his medical residency at Dartmouth-Hitchcock Medical Center in New Hampshire. While visiting Iran in 2015, he met Dorsa Razi, 22.

The two got engaged and married in Iran, and in the midst of it all, they began the process of applying for a visa to bring Razi to the US.

Over the last two years, the couple gathered all the necessary documents, and by the end of January of this year, Razi was told she had just one more step to get her visa: a final interview at the US Consulate in Abu Dhabi earlier this month. But that didn't happen, her husband says.

A day after President Donald Trump signed an executive order banning immigrants from Iran and six other Muslim-majority nations, Moghimi got an email from the National Visa Center saying that his wife's meeting at the consulate had been canceled. And that they need not try making another appointment; the couple could only wait. (Here are the instructions that the State Department rushed to embassies around the world.)

Currently, Trump's order is on hold, temporarily, and some people from the banned countries are making it to the US. But Razi's visa application, like many others that hadn't been finalized yet, is still up in the air — indefinitely. And for the time being, the couple has no legal recourse, Moghimi says.

That's what he's hearing from attorneys with the American Civil Liberties Union. "They're saying right now there's nothing we can do, they're working on the people who have visas and green cards, trying to get them into the country."

Only at that point can the ACLU maybe try to help people in the predicament that he and his wife are in, he says.

Moghimi is hopeful that the legal situation will be resolved, and that he and Razi will be reunited in the US, but he's worried that the restrictions could become permanent.

Right now, it's unclear what will happen. On Tuesday night, a court of appeals heard arguments from the US Justice Department, which has asked for the restrictions to be put back into effect.

This follows an order Friday from a federal judge, which temporarily halted Trump's immigration ban. The Justice Department's lawyer said during the recent hearing, which was conducted by telephone, that the ban was motivated by security concerns.

Meanwhile, a ruling on whether the immigration order's suspension should be lifted is expected to come later this week. The order's constitutionality, however, is another matter — it could go as far as the Supreme Court.

So, Moghimi and his wife are considering other options. For now, "The only plan B is to leave this country permanently," he says. "I am a physician. I'm at a wonderful residency program, I worked hard to get here. But I may have no other option but to leave this country now in the middle of my residency and live somewhere else, like Canada." Or continue living apart from Razi for some time.

It's hard. His wife, he says, is not a threat to anyone. "If anyone ever met my wife, they would realize ... how ridiculous [the ban is], because my wife is about the most sweet, innocuous, kindhearted, and you know, regular, normal person you’ll ever meet."