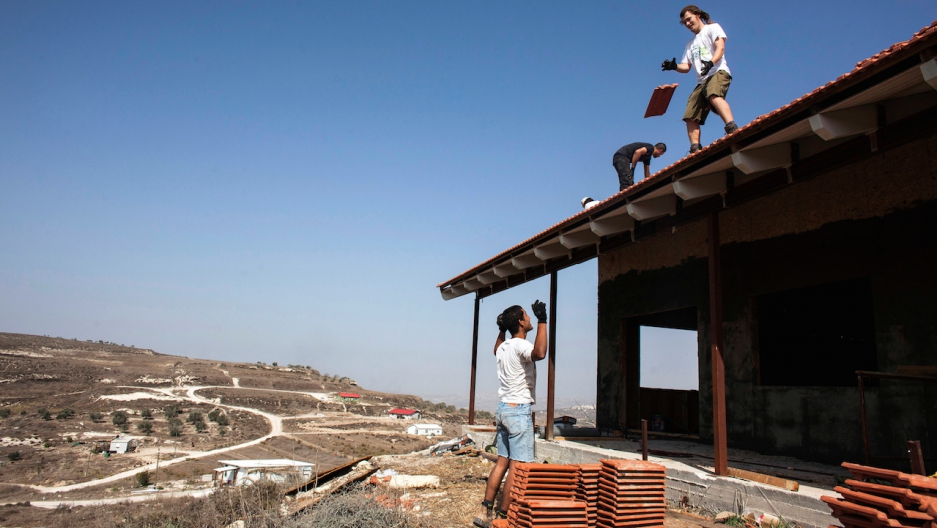 Men work on the roof of a house under construction in the unauthorized Jewish settler outpost of Havat Gilad, south of the West Bank city of Nablus, Nov. 5, 2013.

As police forcibly evacuated the illegal Israeli settlement of Amona last week, in the West Bank, right-wing Israeli lawmakers were frantically preparing legislation to ensure that no other settlements could be cleared in the future.

The legislation was passed by the Knesset, Israel's parliament, 60-52 late Monday night.

The unprecedented “Regularization Law” crosses new legal and political lines — applying Israeli law to Palestinians in the West Bank — and comes just as Israeli Prime Minister Benjamin Netanyahu is preparing for a summit with US President Donald Trump next week.

The law gives Israel the right to expropriate land where Israeli settlements or outposts have previously been built, even if the land is owned by private Palestinians. Palestinian landowners, even if their rights to the land are recognized by the Israeli authorities, will not be permitted to claim the land or take possession of it "until there is a diplomatic resolution of the status of the territories."

Although the law does not grant the settlers ownership of the land, it does permit them to remain in their homes if "the settlements or outposts were built in good faith or at the state's instruction."

This is the first time since Israel took military control of the West Bank in the 1967 Six Days War that the Knesset has passed legislation regulating Palestinian property ownership in the West Bank.

As compensation, Palestinian landowners can choose to receive an annual usage free of 125 percent of the land's value as determined by an assessment committee, or to receive a comparable, alternate plot of land, if one is available.

According to Peace Now, a left-wing Israeli organization, the retroactive legislation can be applied to some 70 settlements and outposts, totaling huge swaths of land, although the precise numbers have yet to be determined. Existing demolition orders against Israeli homes built on land claimed by Palestinian owners will be frozen for a year, pending the state's decision.

Critics say the new law is a flagrant violation of the basic principles of democracy.

A former justice minister and parliamentarian from Netanyahu's own Likud party, Dan Meridor called the law "evil and dangerous" and noted that Palestinians in the West Bank who live under military occupation "did not vote for the Knesset and the Knesset has no authority to legislate for them."

The Regularization Law passed just weeks after the UN Security Council’s Resolution 2334, which states that Israel’s settlement-building has “no legal validity and constitutes a flagrant violation under international law" —  in particular, the Geneva Conventions, which Israel has signed and ratified.

As a result, the law potentially exposes Israel to prosecution by the International Criminal Court. Soldiers who enforce the rules — for instance, by forcibly removing Palestinian landowners from their land — could possibly be brought to trial for war crimes.

Ironically, the Regularization Law could never be applied to Israel proper, because it violates basic civil and property rights already recognized there.

Palestinians and Israeli human rights groups have already filed petitions against the legislation with the Israeli Supreme Court, which may, in fact, strike it down. Israel's Attorney General Avichai Mandelblit, who was appointed by Netanyahu, has stated that he will not defend the legislation in court.

Yet damage has already been done. According to Israeli media, in response to the law's passage, European Union officials have postponed a long-awaited summit that, Israeli officials had hoped, would lead to a thaw in Israel's relations with the EU. And Germany's foreign ministry issued a statement reading, "Our trust in the Israeli government's commitment to the two-state solution has been fundamentally shaken."

The legislation is also likely to impact the upcoming Trump-Netanyahu meeting. Netanyahu, who heads Israel's most right-wing coalition ever, has high hopes for his relationship with the new US administration, which, he believes, will support Israeli settlement policy in the West Bank.

But according to Israeli media, the Trump administration had told Netanyahu not to make any significant moves on settlement before the meeting. Netanyahu had tried to convince his own party and coalition partners to postpone the vote, but they refused. And when, in late January, Israel announced plans to approve close to 6,000 new housing units in the West Bank and East Jerusalem, the White House released a statement saying settlements "are not helpful to achieving peace.”

White House spokesman Sean Spicer declined to comment on the Regularization Law, but at his daily briefing on Tuesday stated that it would be "a topic of discussion" when the leaders meet.

Even the name of the law has become a controversial political issue. In Hebrew, the word for "Regularization" — hasdara — can be interpreted colloquially as "making everything OK in the end.” But the English-language media have been left to sort out their own translations, which have relflected political inclinations.

The right-leaning Jerusalem Post accepts the official government translation and refers to the "Regularization Law.” The centrist Times of Israel goes with the "Outposts Law." And the left-leaning Haaretz blatantly calls it "The Land-Grab Law."