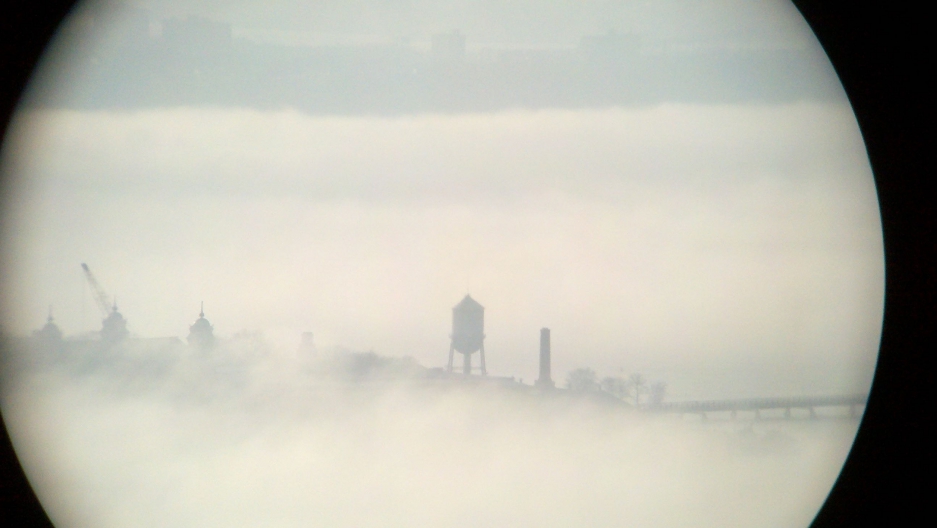 Ellis Island — which once welcomed millions of immigrants to the US — is pictured here shrouded in fog.

Albert Einstein. Nikola Tesla. Levi's. Immigrants have had an outsized impact on innovation in America. But, can you actually measure how much? Turns out, you can.

Petra Moser is an economics professor at New York University. She’s looked at a specific group of immigrants: German Jewish emigres who came to America in the years surrounding World War II.

Before the war, America was not the beacon for scientific research that it is today. In fact, Moser says, American scientists sometimes had to learn German to keep up with the latest research. But that changed, in large part, because tens of thousands of German Jewish emigres came to the US.

Among them were some of the world’s best scientists, like Einstein. But, there were also many others who toiled away anonymously in research labs. Moser tried to figure out just how much they contributed to American innovation.

Her question was pretty simple: If you were a post-World War II American scientist, did having a whole new batch of immigrants around make you more productive?

“What we can do here, is, we can look at the people, the American scientists who worked with a German Jewish emigre, and we can look at what happens to their patenting activity,” Moser says. “And what we see is those people actually become more productive."

And it wasn’t necessarily that the emigres were doing the inventing. They were often working with their American counterparts, teaching them things they might not have known. That helped turn the United States into the technological powerhouse it is today.

“And so even now, many extremely good European scientists come to the United States to study,” Moser says. “It’s no longer the other way around when before the war, American scientists would go to Europe to do their studies.”

There are a million international students in the United States at the moment. Many of them are studying a branch of science. And if we could keep them here after they graduate, that would likely have major financial upsides.

Jennifer Hunt, an economics professor at Rutgers University, and the former chief economist at the Department of Labor under President Barack Obama, has also looked at how high-skilled labor affects US innovation. And she studies patent productivity.

Generally, she says, high-skilled immigrants in the US — we’re talking college graduates, and sometimes people who’ve been to graduate school — are generating more patents than their American-born peers.

She says there are different potential reasons for this.

One possibility is that, because it’s tough to immigrate to another country, the skilled workers who actually make it to America might be more gritty and ambitious.

But Hunt prefers a different explanation.

“It turns out that that gap is explained by the concentration of the foreign-born in science and engineering,” Hunt says. “So, it’s not that they’re just inherently more innovative compared to Americans who studied the same thing.”

And if you’re wondering why foreigners study science in greater numbers, it may be because science is a universal language.

“So, science and engineering, especially science but also engineering, are the same in all countries,” Hunt says. “And, furthermore, you don’t really need very good language skills in order to be a scientist or an engineer, at least when you’re doing your innovative work.”

But, of course, just because America is currently the premier place to get a degree in science or engineering, doesn’t mean that it will be forever.

An estimated 17,000 students in the US are originally from one of the seven countries on President Donald Trump’s banned list. And some of those bans may be completely lifted in a few months; we don’t know.

Odds are, though, that many of those students are studying and doing research in a science or technology-related field. If they decide to study somewhere else, that would be another country’s gain.