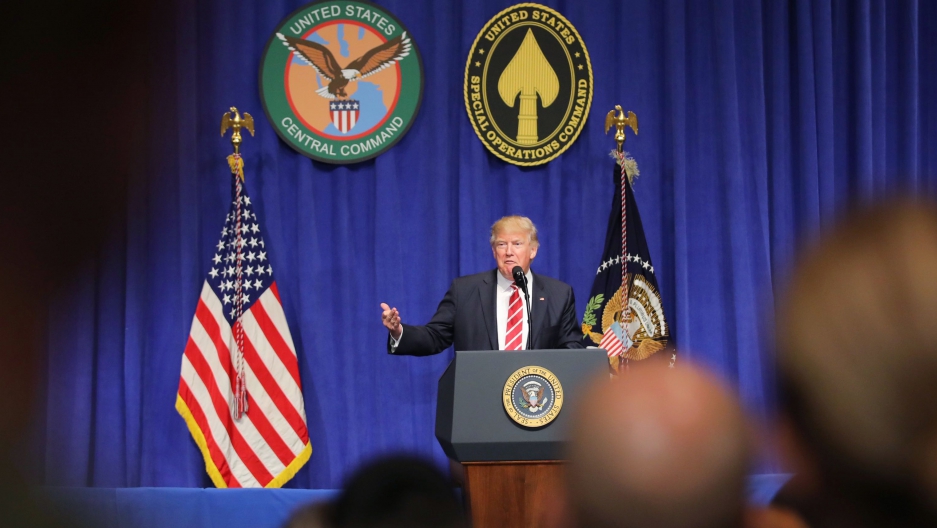 President Donald Trump is welcomed as he speaks to commanders and coalition representatives during a visit to the US Central Command and US Special Operations Command at MacDill Air Force Base in Tampa, Florida, on Feb. 6, 2017.

President Donald Trump set the ball rolling to repeal major components of the Obama administration's economic policy. The executive order signed by the president did not directly impact existing financial regulations, but it did call for a review of the 2010 Dodd-Frank Act. That law was designed to prevent a repeat of the 2008 financial crisis and was a major target of Trump’s presidential campaign.

The Dodd-Frank Act was far-reaching in scope and created several new regulatory agencies such as the Financial Stability Oversight Council, which monitors “too-big-to-fail” banks that pose a risk to the US financial system, as well as the Consumer Financial Protection Bureau, which seeks to protect buyers from subprime loans and enhance their knowledge of credit products. The law led to the most significant changes to financial regulation since the Great Depression.

#16. @realDonaldTrump As you cut financial regulations, how will you prevent a future financial crisis? #100Days100Qs

Trump has since called it "a disaster" and pledged to do “a big number on Dodd-Frank.” He believes that eliminating regulations on bank lending will increase loans to small businesses and bolster the economy.

Trump has described his vision for the financial system as a “normalized control.”

One person who does not see the law as a failure is former US Rep. Barney Frank from Massachusetts. Frank was one of the primary sponsors of the Dodd-Frank Act that was signed into law in July of 2010, and he believes that the legislation has properly regulated the private sector without putting job growth at risk.

“I will point out,” said Rep. Frank speaking to The Takeaway's fill-in host Todd Zwillich, “that the bill we passed moves the banks more in a direction of lending. It discourages them, to some extent, from the financial razzle-dazzle that Warren Buffett called ‘instruments of financial mass destruction.’ This rule that they are abolishing says that your broker has to take into account your best interest. What has that got to do with banks lending?”

Addressing what he and others see as a major positive impact of the law, Rep. Frank went on to say, "We did away with these subprime predatory loans ... that were a major cause of the crisis. Not because we don't like poor people, but because we don't think it's good for either them or the economy if you give them loans that they can't pay off."

Critics like Trump say the regulations are too restrictive and prevent banks from loaning money, a claim Frank took issue with.

"It's important to note that this claim that what they're trying to do is promote all loans is actually the opposite of what they're doing," Frank said.

House Republicans are also going after the Cardin-Lugar Amendment, a part of the Dodd-Frank Act that requires oil, gas and mining companies to disclose to the public any payments they make to foreign governments on natural resource extraction. The rule, which had bipartisan support, does not restrict whether companies can do business in these countries.

“We have roadblocks like you’ve never, ever seen. Environmental blocks, structural blocks ... we’re going to allow the Keystone Pipeline and so many other things to move forward,” said Trump.

"This was an anti-corruption thing," Rep. Frank said. "I don't understand why the Republicans felt like they needed to come to the aid of people who wanted to be able to bribe public officials in countries to make themselves rich and not let the people in those countries know it."

In addition to rolling back Dodd-Frank, President Trump also signed an executive order aimed at eliminating the fiduciary rule, a rule that requires brokers and financial advisers to act in their client's best interests, not their own financial interest, when giving retirement advice.

Said Frank, “He says he’s going to drain the swamp. People my age will remember the very funny comic strip ‘Pogo,’ which was about a possum in a swamp. And one of the great lines from Pogo was ‘we have met the enemy and it is us.’ Well, that’s Donald Trump in the swamp.”