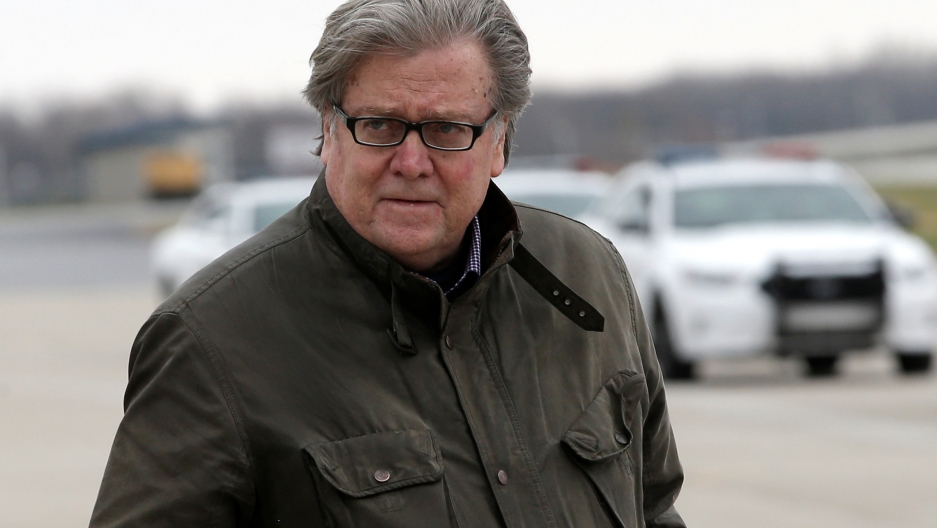 Stephen Bannon, chief strategist to President Donald Trump, was a founding member and executive chairman of Breitbart News, which Bannon called a "platform for the alt-right." He's shown here walking from Trump's plane.

It all started with a column.

On Jan. 30, Rosa Brooks wrote an editorial in Foreign Policy magazine speculating about what would happen if Donald Trump actually went insane. She mused that Trump could be impeached, or that he could be removed by the vice president and the cabinet. "And then at the very end of the column, I said there's something I always assumed was unthinkable in this country, which is the military refusing to obey orders, or even a coup. But for the first [time] in my life, I could imagine a scenario where that actually happens, and that's frightening."

At first, nothing happened. But then a few days after the column came out, she boarded a plane from Washington, DC, to Houston. Everything was quiet when she got on the plane. "But I got off, and I had hundreds and hundreds of new tweets and emails. And I thought, 'What the heck happened?'"

Breitbart News — the website pandering to the "alt-right" and white supremacists previously run by Steve Bannon, now Donald Trump's top political adviser — had run a story about her column, called "Ex-Obama Official Suggests Military Coup Against Trump." Soon, conspiracy-oriented outlets from InfoWars to white supremacist websites like Daily Stormer claimed she was threatening the violent overthrow of the US government.

"I swear I wasn't actually planning a coup!" she says.

Still, the hate mail flowed in. She was bombarded with obscene, racist and violent tweets, calls and emails. One email warned, "I AM GOING TO CUT OFF YOUR HEAD ... BITCH." Other messages threatened to shoot her, hang her, deport her and imprison her.

At first, Brooks says she downplayed the threats. "I thought, 'Oh, OK. So you get a bunch of crazy people who have nothing better to do than sit down and send you nasty emails. So what else is new?'"

But then she remembered the shooting at Comet Ping Pong in December.

Comet Ping Pong restaurant was the target of fake news stories saying it was harboring a child sex ring run by Hillary Clinton. "Everybody including myself said, 'Oh that's so silly. Nobody could possibly believe that. It's just goofy," recalls Brooks. But a North Carolina man read the story and stormed the pizzeria with a military-style assault rifle. Brooks says events like that make it harder to dismiss the threats against her as hot air. "That kind of incident is sobering. It only takes one crazy person to take silly crazy internet rumors seriously to create a real danger."

Brooks concedes online harassment of journalists is nothing new. Over the years, Brooks says she's received plenty of hate mail. But something feels different now.

With Trump and Bannon in the White House, Brooks says she's no longer confident that journalists are safe from government crackdowns. "When you have a president in the White House who feels free to go make personal attacks on federal judges, foreign leaders, etc. ... it does start feeling like all bets are off."

At the end of the day, Brooks says journalists must not be intimidated into silence. "My biggest fear is that people will stop speaking truth."

Brooks, who wrote her own column about the experience, promises to redouble her efforts to ask the hard questions, have uncomfortable conversations and challenge executive overreach.

"We do have a set of really important Constitutional norms in this country. And we're seeing them challenged from the White House itself in a very public way. And that's scary, and we have to call it scary," Brooks says. "Pushing back against treating this as if it's just normal is really, really important for all of us to do."