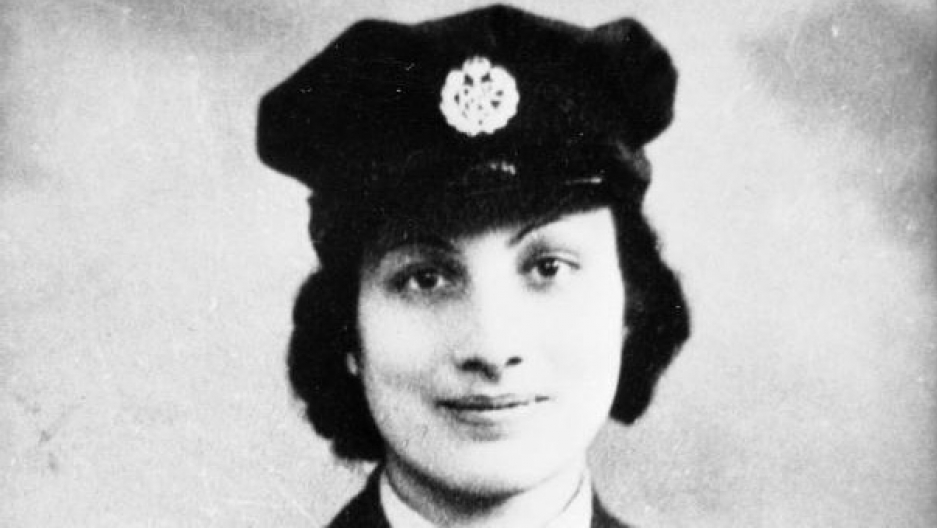 Noor Inayat Khan, in the uniform of the British Women’s Auxiliary Air Force, is pictured in 1943.

She was a Muslim. A refugee. A princess. A guerrilla fighter, trained in bomb-making, sabotage and secret communications. But above all, she was a war hero.

Noor Inayat Khan was a British agent during World War II. And she made the ultimate sacrifice in the fight against fascism.

She was “a citizen of the world,” according to Shrabani Basu, the chair of the Noor Inayat Khan Memorial Trust and author of the biography, “Spy Princess: The Life of Noor Inayat Khan.”

Noor was born in Moscow in 1914, but brought up in France and Britain. Her father was Indian, a musician and an influential Sufi Muslim teacher descended from royalty. Her mother was an American, originally from Albuquerque, New Mexico, and a Sufi convert.

Noor was an unlikely warrior. “She was actually a dreamy musician. She wrote children’s stories,” Basu says. “She played the harp. She played the veena [an Indian stringed instrument]. She composed music.”

Her family was living in Paris when the war broke out, and when Germany invaded France, the family fled. “So they came as refugees to Britain,” explains Basu. “And she volunteered — her sole aim was to volunteer for the war effort, and help her adopted country, France, win back its freedom. And to fight fascism.”

Noor joined the Women’s Auxiliary Air Force in 1940, but her fluency in French brought her to the notice of the Special Operations Executive, a secretive organization set up by Winston Churchill to promote guerrilla resistance in Nazi-occupied Europe. “And so she was recruited as a secret agent,” Basu says. That was early 1943.

“Even though she was Sufi, even though she believed in nonviolence,” Basu says, “she knew there was a bigger fight to be fought.”

Noor’s idealism apparently made some of her colleagues question her suitability for the field. She once said she couldn’t tell a lie, “which of course doesn’t quite fit with your life as a secret agent,” Basu notes, “because that’s a big lie. You have a cover name. You have a false passport.”

But documents from the National Archives show that her superiors saw the “steel” in her character, Basu says. “They saw an inner strength in her, and they knew she would do the job."

That job was extremely dangerous. She was assigned the role of radio operator and dropped into France in June 1943. Radio operators were in constant danger of capture, as the German secret police, the Gestapo, could triangulate signals to find their locations. Life expectancy was only six weeks, according to Basu.

Noor’s “circuit” of agents was quickly compromised, and most of her team was arrested. But she was resourceful enough to keep operating in Paris under the noses of the Gestapo.

However, in October 1943, Noor was betrayed. Her name was “sold to the Germans” by the sister of one of her colleagues, Basu says. “It was a love triangle,” says Basu. “Noor was very beautiful. Everyone was in love with her. And this sister was jealous of Noor. And she betrayed her.”

Noor did not go quietly. “They broke into her flat and arrested her. But Noor being Noor put up a big fight," Basu says. "It needed six burly men to hold her down … she bit fiercely and drew blood.”

She also made two daring escape attempts, but was recaptured.

German agents tortured Noor in hopes of forcing her to reveal contacts and knowledge of the British communications systems. But she never broke. “She wouldn’t even tell them her real name, and they never discovered the fact she was Indian.”

However, she had failed to destroy her notebooks, and the information in them helped the Germans lure several more British agents into deadly traps.

After almost a year in captivity, Noor was transferred to Dachau concentration camp, where she was tortured again, and then along with three other female agents, shot to death by the Nazis. She was just 30 years old.

Witnesses say at the end she shouted "Liberté."

“So they didn’t get her spirit,” Basu says.

Noor was also a princess, descended from a once-powerful Muslim dynasty in southern India that was perhaps most famous for its stubborn resistance to the imperial power of Britain in the 18th century: the sultan of Mysore. (As a side note, during the Revolutionary War, the US recognized Muslim Mysore as an ally, and the Pennsylvania State Navy named an 18-gun ship after Sultan Hyder Ali, one of Noor’s ancestors.)

Basu says the principles Noor fought for are still relevant today. “We see the neo-fascist groups rising in Europe. We see the far right emerging everywhere. We see walls being put up against refugees … The things she fought for, these are messages we need to remember. We need to remember these lessons of history. Why did we fight against fascism?”