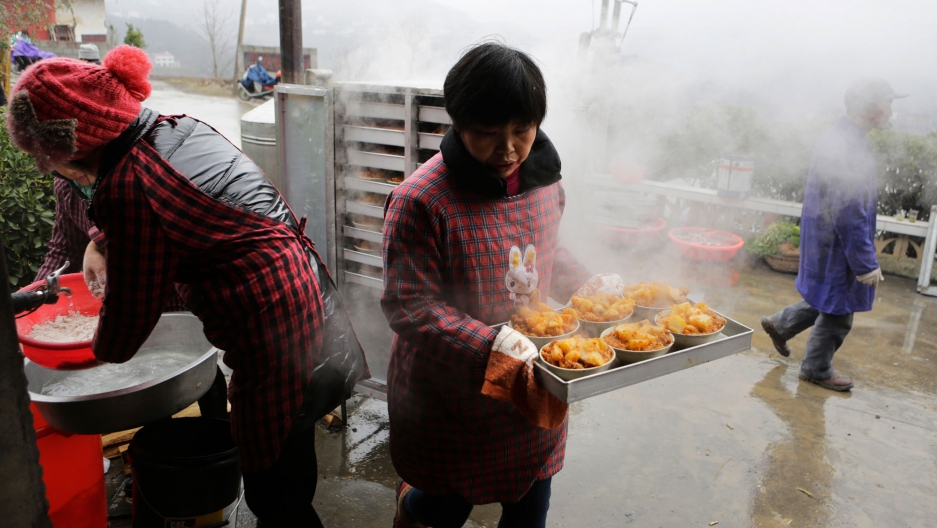 If there’s a subject Kei Lum Chan knows, it’s the cuisines of China.

“I knew pretty much most of the regions. We have traveled all over [the country] so there were no surprises for us.”

Kei Lum Chan and Diora Fong Chan are the co-authors of a new book that attempts a somewhat comprehensive approach to Chinese food. The two married writers have the pedigree: Kei Lum’s father authored a 10-volume classic of Chinese cooking, published in 1953 in Hong Kong. Diora’s family heritage includes membership of the Qing Dynasty court, where fine cooking became part of her family’s own traditions.

For their latest book together, titled "China: The Cookbook," they found some parts of China more interesting than others, says Kei Lum.

“For instance Inner Mongolia, a province in the northern part of China," Kei Lum says. "This is where Genghis Khan used to roam. The cuisine was simple. We were invited to a dinner one time by some Mongolian friends, to a yurt, the Mongolian tent. Everybody got equipped with a knife and they served dinner on a wooden board with a whole lamb which [had] been boiled. They use a sheep called the fat-tailed sheep, with a big, big tail — a big piece of fat. And when they serve the lamb, the piece of fat is separated and put on top of the lamb.”

Picture the scene: A big glob of fat sitting on top of a boiled lamb. Kei Lum continues:

“The host would take the knife, cut out a strip of this fat, put it on his palm and serve it to the guest of honor — which on that particular day was me. I had to receive that piece of fat — I'd say it was about four inches long and an inch wide — I had to receive it on the palm of my hand, and sort of suck it in in one breath.”

Kei Lum says he was obliged to consume the length of fat because he was the guest of honor. And everybody that followed him had to do the same thing until all had been served.

“Now, my friend next to me did have some trouble doing that — probably more psychological than anything else, because it went down halfway! So it took him an additional try. It was very funny.”

That was one of the experiences Kei Lum and Diora Fong had as they traveled China, experiencing different foods and different cultures.

“China is not just Sichuanese or Cantonese food," Kei Lum says. "We've got 30-plus regions and if you count sub-regions it's even more. China is really diversity itself. Wherever you go you find different food. We are the beneficiaries of thousands of years of development. And we are very fortunate to have such a rich heritage to write from.”

Kei Lum says the thing to remember, no matter the regional differences, is that Chinese food is about sharing.

“We hate to eat alone,” he says, “the Chinese don't like it. No matter where you go in China, all the food is shared. If you go to Mongolia, they share a lamb. If you go to Canton, they share a dish of vegetables. Everything is shared. It is hard to cook for one in Chinese cooking; you just don't do a portion of one — you share amongst family, friends.”

This dish dates back to the late sixth century when it was created by Yang Shu, a top government official during Emperor Yang’s reign in the Sui Dynasty. The dish was originally called “Golden Nugget Rice” because each rice grain was enveloped in golden egg yolk.

Bring a saucepan of water to a boil over high heat, add the shrimp (prawns), and blanch for 2 minutes. Drain and set aside.

Combine 2 egg whites, 4 egg yolks, and 1/2 teaspoon salt in a small bowl and beat together.

Slowly pour the eggs into the rice and, using chopsticks, stir until each grain of rice is coated in egg.

Heat the remaining 2 tablespoons oil in a wok or large skillet (frying pan) over medium-high heat, add the rice, and stir-fry until each grain of rice is covered with oil. Turn off the heat and stir-fry for another 2 minutes until the eggs are cooked. Add the shrimp, barbecue pork, and 1/2 teaspoon salt, and toss for another 2–3 minutes. Stir in the chopped scallion (spring onion) and transfer to a serving bowl or plate and serve.

Alternatively, 3 cups (1 lb 2 oz/ 500 g) of day-old rice can be used. Rinse the rice with water to wash away the starch and to break up any lumps, then drain. Skip step 1 of the recipe.