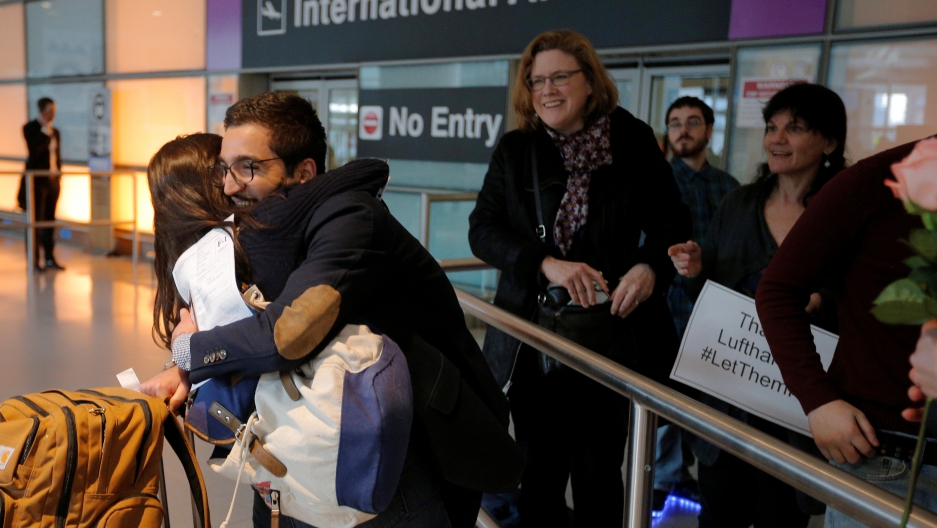 Behnam Partopour, a Worcester Polytechnic Institute (WPI) student from Iran, is greeted by his sister Bahar (L) at Logan Airport after he cleared US customs and immigration on an F1 student visa in Boston, Massachusetts, on Feb. 3, 2017. Partopour was originally turned away from a flight to the US following President Donald Trump's executive order.

A federal judge in Boston on Friday turned down a request from the American Civil Liberties Union of Massachusetts to extend a temporary restraining order (TRO) that prohibits US Customs and border agents from enforcing aspects of President Donald Trump's immigration and refugee ban.

A short time later, though, a different judge — across the country in Washington — issued his own, more far-reaching restraining order that effectively halted all implementation of Trump's ban.

From the very beginning, Boston federal judge Nathaniel Gorton was skeptical of his own restraining order and his decision not to extend the restriction on Trump’s executive order did not come entirely as a surprise. Matthew Segal of the ACLU argued that the ban discriminates against Muslims, but Gorton said he read nothing in Trump’s executive order that specifically singled out Muslims.

Segal then referenced Trump's own words from December 2015, calling for a “complete and total ban on Muslims” entering the country.  Later, when a lawyer for the Commonwealth of Massachusetts asserted that Trump’s directive violated the Constitution's equal protection clause, Gorton questioned its applicability in this case. Segal said the ACLU's request for a permanent injunction would allow more time to deal with a rash of new cases of green card and visa holders being denied boarding access by airlines.

Outside the courtroom, he told reporters:

“What this is about is what are going to be the ground rules while we litigate this case. And what we’ve seen in the last week is that people have been thrown in to chaos, their lives have been upended. And what we are talking about is an affecting peoples’ lives every day.”

Within hours of the hearing, Gorton ruled in favor of the government. Gorton, a judge with a reputation as a conservative, was appointed to the federal bench by President George H.W. Bush. He has also served on the United States Foreign Intelligence Surveillance Court.

Gorton’s decision, which focused narrowly on whether to extend the restraining order and not the merits of the case, was made moot by the federal judge in Seattle to invalidate. That judge, also a George H.W. Bush appointee, demanded the reinstatement of as many as 100,000 valid visas and the return to the US of those who were deported.

Meanwhile, ACLU-Massachusetts Executive Director Carol Rose told WGBH and PRI that the organization was “deeply disappointed” in the decision by Judge Gorton, and would focus on fully invalidating Trump’s” unconstitutional” order in courts around the country.