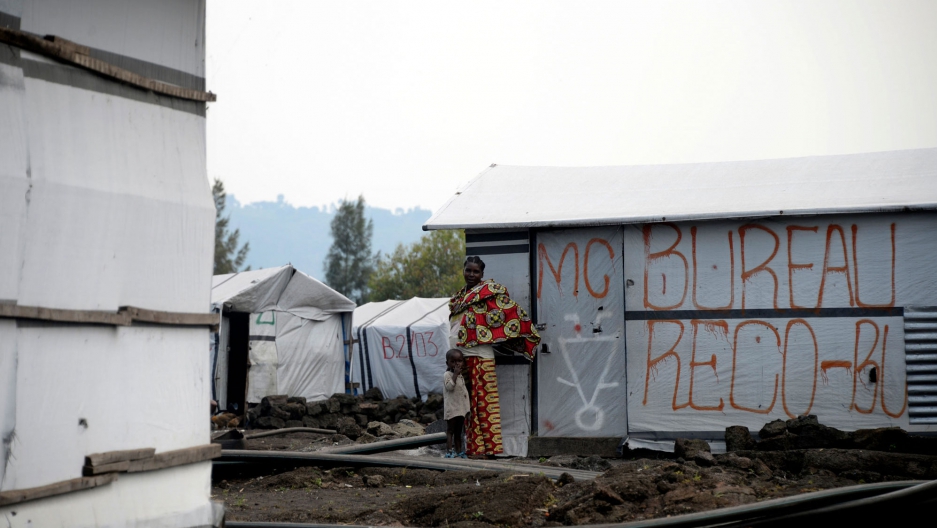 A mother and child in the Bulengo internally displaced persons camp in the Democratic Republic of Congo.

Research shows that women and children are overrepresented in internally displaced people (IDP) camps in the conflict zones all around the world. The Democratic Republic of Congo is no exception.

The war that has been ongoing for decades in the Eastern Democratic Republic of Congo has displaced more than 3 million people since 2009. Many of them continue to live in more than 50 camps for IDPs.

“The situation at the IDP camps in Eastern Congo has been a chronic one for the last two decades,” said Stacey White, a humanitarian policy analyst who worked extensively in these camps. “Hence, the international community doesn’t consider this an emergency anymore. It’s no longer the top priority. But it’s not considered an area in transition either — so there is no traditional development work going on.” 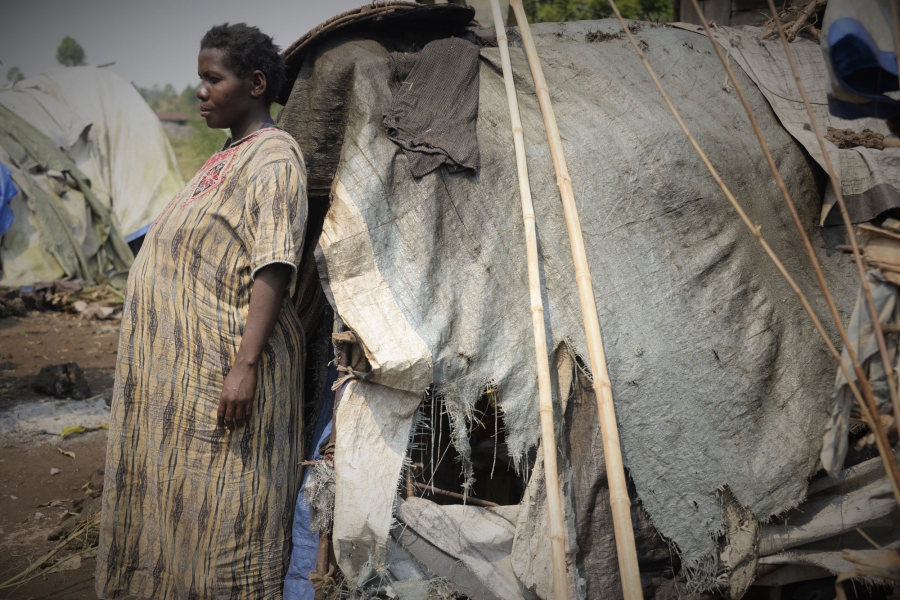 Munguahilo Kakomire, a 45-year-old mother of seven and expecting her eight child.

Munguahilo Kakomire, 45, is pregnant. She and her family have been living in the Bulengo camp for 15 years.

Kakomire is from the pygmy community of the DRC, indigenous to the country’s vast rainforests. Although pygmies lived in Congo’s forests for millennia as hunting and gathering tribes, the war displaced them from their ancestral lands 15 years ago.

As an ethnic minority, Kakomire and her family feel marginalized even in the IDP camps, and they live separate from other communities in the Bulengo camp. 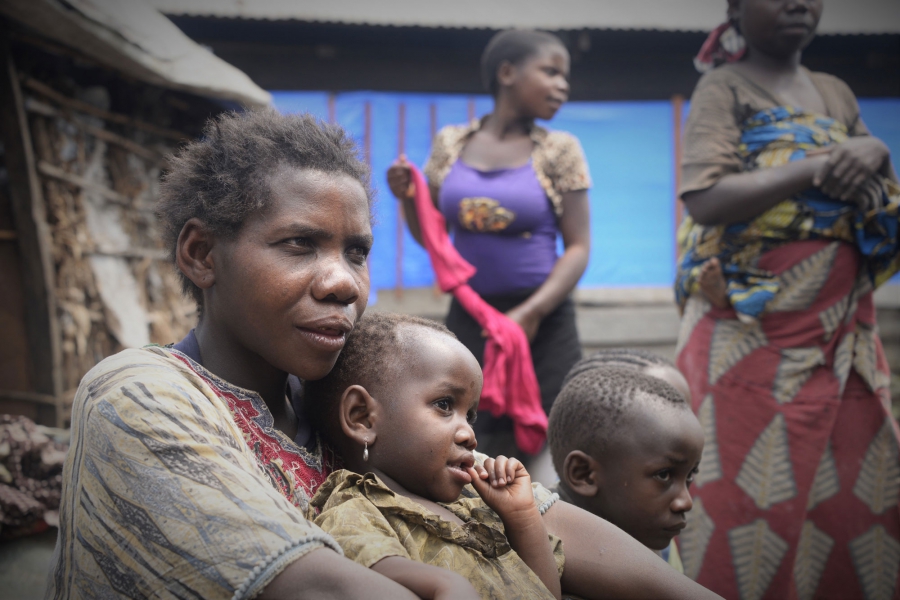 Kakomire, a mother of seven, doesn’t how for how long she has been pregnant. Neither does she know how many pregnancies she had in her lifetime.

“In our community, we just get pregnant and then when the time comes, we deliver the baby at some point,” she said. “We don’t count the babies who died, stillborn babies or miscarriages. There are simply too many.”

She has never seen a doctor in her life and was planning to deliver the baby with the help of her husband in their tent. 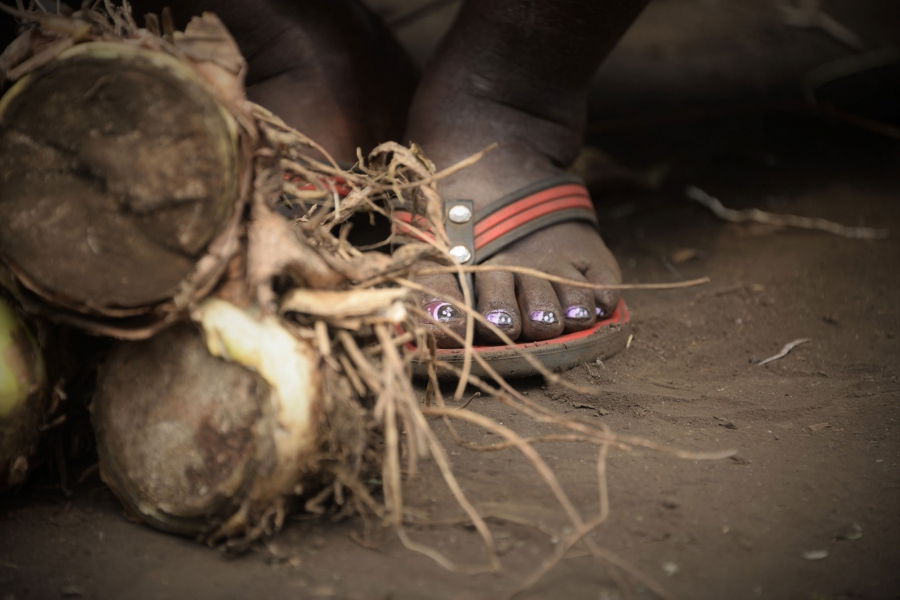 As the population in the camps continue to grow exponentially, the communities keep using up the resources in the surrounding area.

“Finding food to eat becomes more and more difficult every day,” Kakomire said. Every time she wants to find something to eat, she needs to venture further and further in the bush.

“We are living like animals here,” she said, pointing at the roots she picked that day to boil and eat.

Although there are some organizations assisting the IDPs, Kakomire says she never received any help — something she attributes to being part of a marginalized community within the camp. 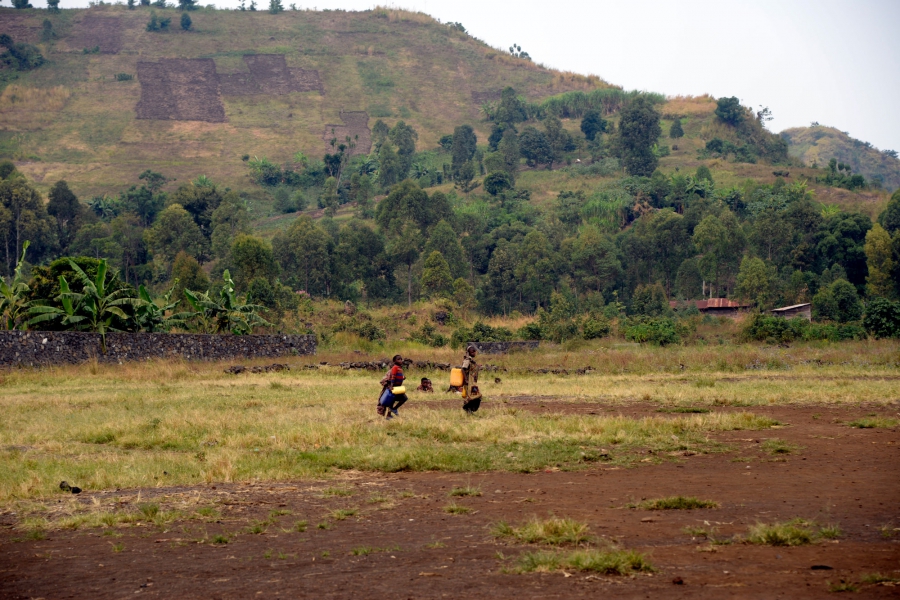 Due to the poor hygiene conditions and the rising population density, families need to boil their water. It’s often the women’s responsibility to carry water, find food to pick and wood to burn in the bush. Although some families receive limited food aid from the UN, more often than not the communities need to take care of their own nutritional needs.

In an area that’s suffering from heavy deforestation, women tend to spend long hours away in the bush to find what they need — which makes them more vulnerable to sexual assault.

“There are so many children in the camps born of rapes,” White explained. “But it’s still a very big taboo and most of the rape cases go unreported.” 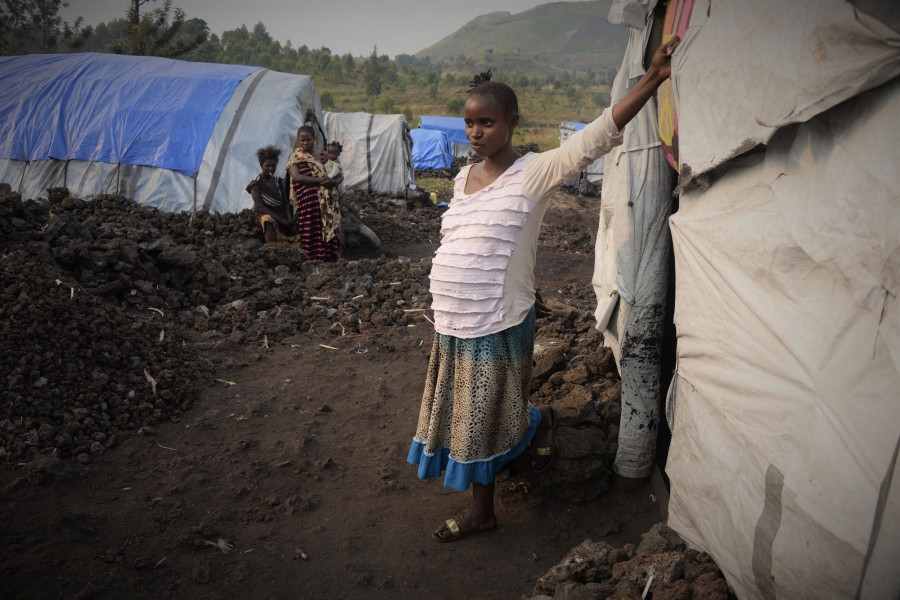 Furthermore, since many women also experienced sexual violence, they also suffer from complications that make giving birth even more dangerous. 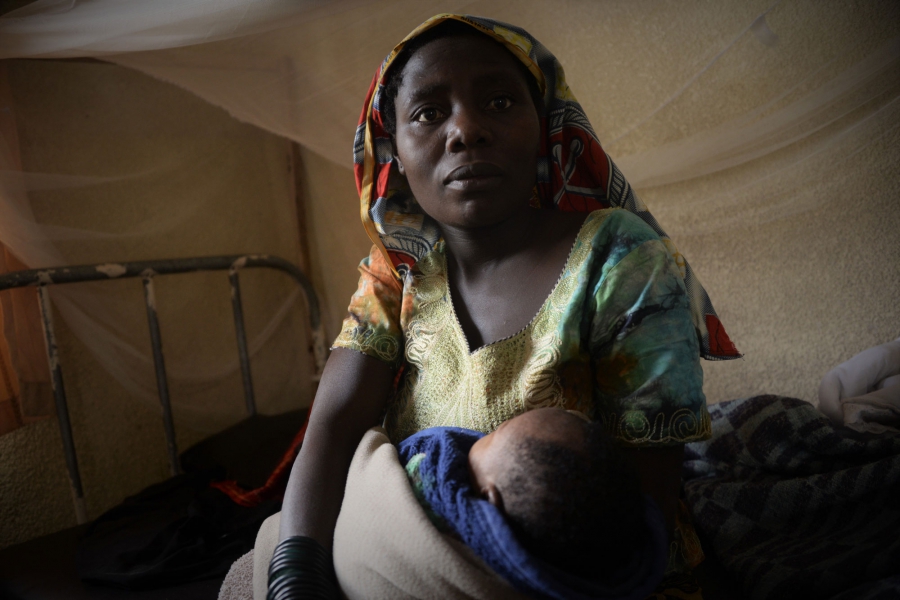 Kanyere Sifa, a 26-year-old single mother, had just given birth to her sixth child in a local clinic in the IDP camp of Muganga — where there are no doctors, but some nurses.

“I’ve never had access to birth control in my life,” Sifa said.

The clinic where Sifa had given birth is one of the only clinics that serve the IDP communities. While the nurses help some of these women who don’t have complications, the help comes at a cost: 11,500 Congolese Francs ($12) and, hence, isn’t accessible to most women.

Most women living in surrounding communities would need to walk for hours to reach the clinic — another security risk. 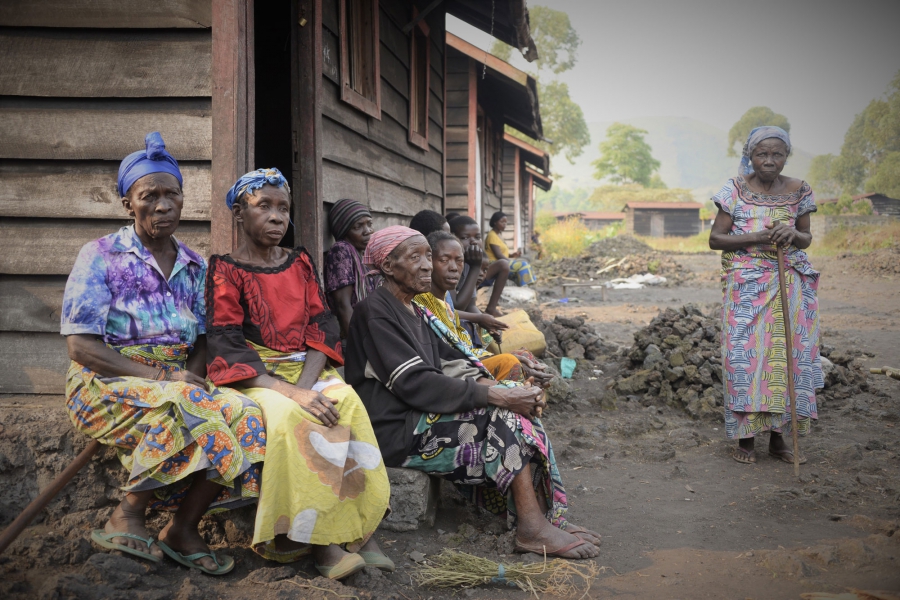 The camps have a young population due to the high fertility rates. That said, with the chronic and ongoing situation in the region, the camps are now also home to an aging population of women — widows.

In the IDP camps around the world, the older persons form a significant percentage of the population — sometimes up to between 30 and 65 percent. According to HelpAge, older people are consistently neglected in humanitarian operations and policy.

Typically widowed and displaced in the 1990s and 2000s, thousands of elderly women also occupy the tents of the camps in Eastern Congo.

While younger generations might still have a chance to reconstruct their lives and reintegrate with a new community, these opportunities are much more limited for the elderly.

Despite the old age and physical vulnerability, older women also continue doing chores such as finding food, wood and water. 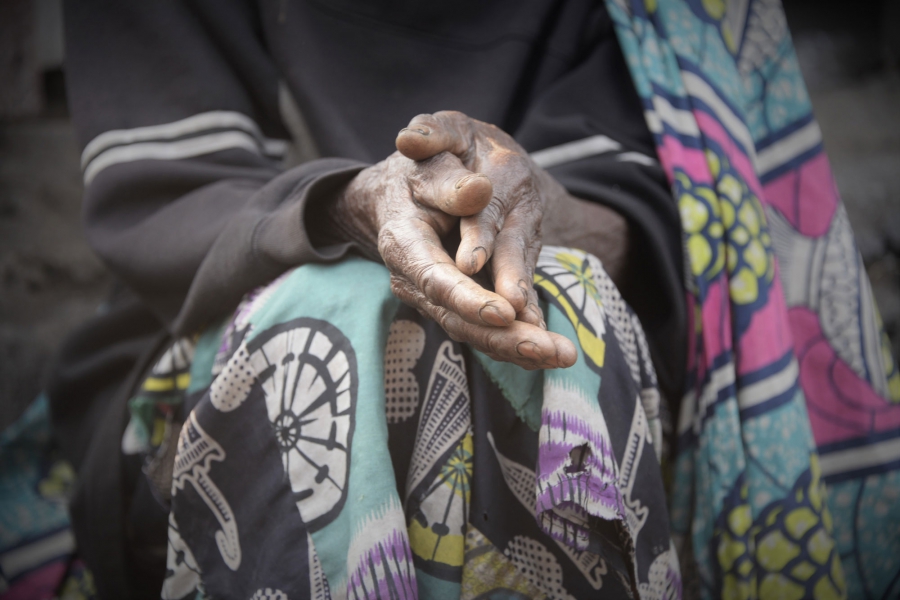 “You’re asking me how I am. Can you not tell how I am by looking at me?” pondered Lucine Tabu, an 80-year-old resident of the camp.

She arrived at the Mugenga camp after fleeing her village 12 years ago and her daughter joined her shortly after. “My daughter is also old now, she cannot help me much,” she said. She experiences chronic pain and doesn’t feel well, but has never been able to see a doctor about it.

Neither she nor her daughter are planning to go to Goma, the nearest major town where there are more economic opportunities.

Like many of the other women in the camps, Tabu feels that city life offers them nothing and plans to keep living in the camp for the foreseeable future.

Without access to medical care and nutrition, disability, various illnesses and chronic pain are inevitable for many of the older IDP women. 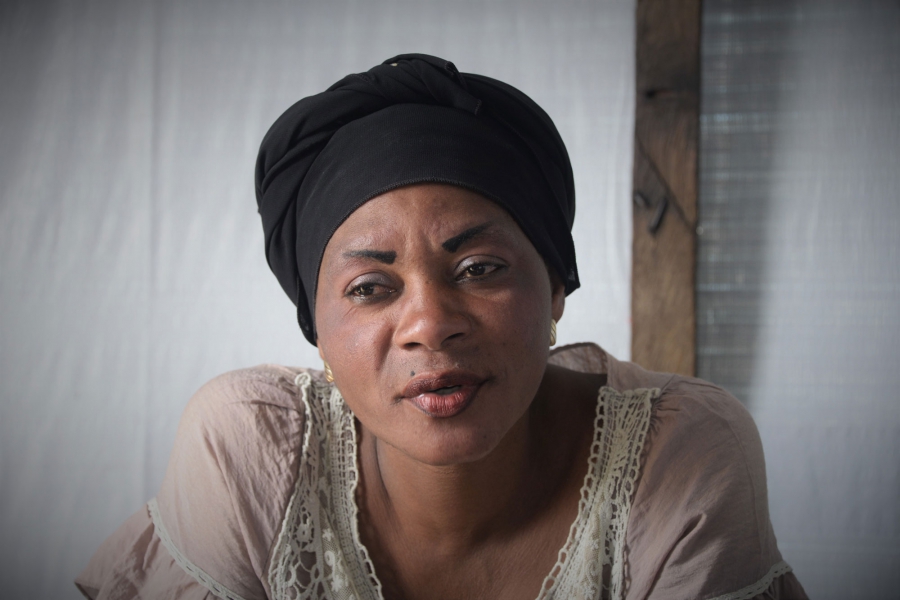 Despite all the challenges of living in the IDP camps, life still goes on. It’s the new normal for millions of women — who don’t have many hopes for building a life outside the camps.

Riziki Noawiheba, a secretary at the Bulengo camp as well as a resident, feels it’s still her responsibility to look good and respectable to her fellow residents. Every day, she gets up, chooses some nice clothes to wear and puts on some makeup.

When complimented on her beauty, Noawiheba had put on a poignant smile and said, “I used to be more beautiful, but the war stole my beauty."

Didem Tali traveled to the Democratic Republic of Congo as an African Great Lakes Fellow of the International Women’s Media Foundation.