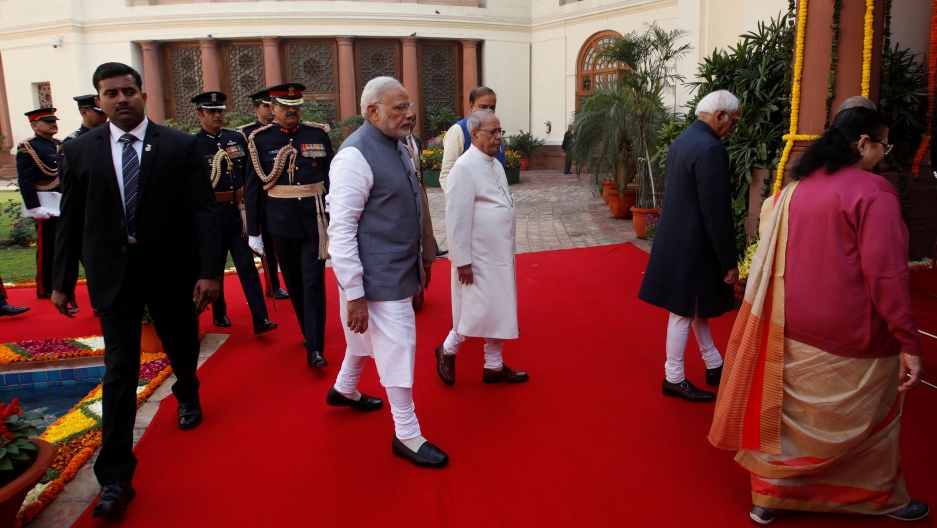 India's Prime Minister Narendra Modi (3rd L) and President Pranab Mukherjee (C) walk inside the parliament premises as they arrive to attend the first day of the budget session, in Delhi, on Jan. 31, 2017.

Indian student Sunny Nair has always dreamt of working for a technology giant in the United States but fears that President Donald Trump will crush his life ambition.

The 19-year-old worries that Trump's crackdown on immigration will include restrictions on so-called H-1B visas, which India's IT sector uses to send thousands of highly skilled workers to America every year.

Analysts say the issue also threatens to sour Trump and Indian Prime Minister Narendra Modi's burgeoning relationship. The leaders have extended mutual invitations to visit their respective countries but are heading for a clash on visas.

"I had always dreamt about going to the US and working for a major company like Infosys but now all that will change," Nair told AFP despondently before trudging into class.

The aspiring techie had planned to head to the United States for further study next year after completing his bachelor's degree in engineering at the Don Bosco Institute of Technology in Mumbai.

He hoped that would help land him the opportunity of a lifetime at one of India's top information technology exporting firms, such as Infosys, Tata Consultancy Services or Wipro.

But Trump has pledged to prioritize jobs for Americans. Shares in India's three largest tech firms took a hit this week after White House spokesman Sean Spicer suggested that presidential and congressional action could be taken on H-1B visas as "part of a larger immigration reform effort."

Three bills have been introduced to Congress which reportedly seek to restructure the H-1B visa program, including one that would raise the salary threshold, making it more expensive for Indian firms to send employees to America.

Scores of high-profile Indians, including Google chief executive Sundar Pichai, have followed a well-trodden path from Indian IT institutes to a master's degree in America before landing a plum job in Silicon Valley.

Nair is now anxiously plotting a different road map for his future.

"[Restrictions] ... would be a major negative decision by Trump and would mean fewer international opportunities so my goals have shifted drastically now. I am looking at other venues for my future studies like Canada and Europe instead of USA," he said.

India's IT outsourcing industry is worth around $108 billion, according to industry body NASSCOM, the National Association of Software and Services Companies, with almost 4 million people employed in the sector.

Nasscom president R. Chandrashekhar said restrictions would create uncertainty and leave US businesses short of the skilled workers they need.

"It's a myth that these workers replace American workers," he told AFP.

"Given that there aren't enough people with the qualifications to fill these jobs, two things can happen — these jobs can remain unfilled or companies can ship these jobs overseas. Neither is a good thing for the US."

India's IT sector has become a boom industry in recent years with companies, especially in developed nations, subcontracting work to firms such as TCS, taking advantage of the country's skilled English-speaking workforce.

It makes more than $60 billion alone from the American market, providing IT and engineering services to major US businesses.

The United States offers 85,000 H-1B visas every year, most of which are snapped up by Indian outsourcers whose employees fill a skill gap in US engineering. Applications are vastly oversubscribed and are allocated via a lottery system.

"Indian IT firms may start focusing on Asia-Pacific and expand their businesses here instead of in the US," D.D. Mishra, an analyst at technology research company Gartner told AFP.

Infosys has said it is looking into reducing its dependency on visas to stay competitive, while worried software executives are due to travel to the US later this month to press their case with lawmakers.

Tech Mahindra CEO C.P. Gurnani told AFP there would certainly be an impact, adding, "It is unfortunate that we are talking about protectionism and creating artificial trade barriers in the age of globalization."

"[Any] restriction is always a concern and we hope that the Trump administration will take into consideration all factors, before making any decision," he added.

A spokesman for India's external affairs ministry said earlier this week that Delhi had conveyed India's "interests and concerns" to "senior levels" in the US administration and Congress.