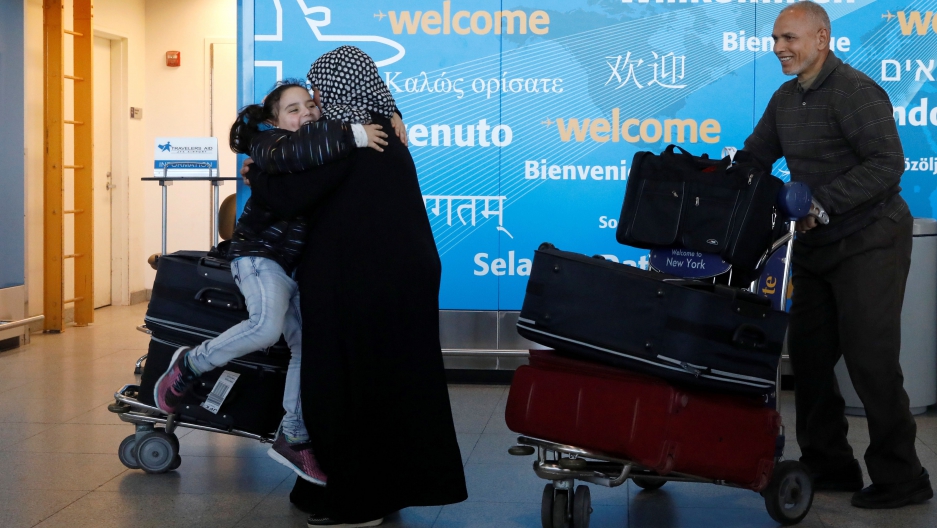 International travelers are greeted as they arrive at John F. Kennedy International Airport in New York City, on Feb. 4, 2017.

A move by President Donald Trump's administration to appeal a federal court order suspending its contentious immigration order is the latest twist in what could be a long, high-stakes legal battle.

Here are the main facts about Trump's executive order and the court action surrounding the case:

The Jan. 27 decree prohibits entry to all refugees, regardless of nationality, for 120 days, and bars Syrian refugees indefinitely. It also suspended the issuance of visas for 90 days to migrants or visitors from seven mainly Muslim countries: Iran, Iraq, Libya, Somalia, Sudan, Syria and Yemen.

Judge James Robart of the federal district court in Seattle on Friday ordered the nationwide suspension of the president's order. His ruling stands until the court can study a complaint filed by the Washington state attorney general, Bob Ferguson. Critics including Ferguson say the measure unfairly targets Muslims.

Federal judges in several other states — notably California and New York — have also ruled against Trump's executive order, but Robart's ruling has by far the greatest sweep.

Trump attacked the judge in a string of fiery Twitter posts on Saturday.

"The opinion of this so-called judge, which essentially takes law-enforcement away from our country, is ridiculous and will be overturned!" the president wrote.

"Those individuals with visas that were not physically canceled may now travel if the visa is otherwise valid," a State Department spokesperson said Saturday.

And the Department of Homeland Security, which has authority over border police, said it was reverting to "standard policy and procedure."

Was the federal ruling unusual?

Not really. The suspension of Trump's order is reminiscent of the reaction to Barack Obama's executive order of November 2014, which sought to protect from deportation more than 4 million undocumented immigrants who had been in the country for at least five years.

A federal judge in Texas ruled that Obama had overstepped his powers and blocked the order's implementation. That decision survived an appeal and reached the Supreme Court. Obama ultimately had to give in on what had been a key measure of his second term.

The Trump administration filed an emergency motion with the Ninth Circuit Court of Appeals saying that suspending the ban was causing "irreparable harm" to the American public.

It also argued that Robart had run afoul of constitutional separation of powers, and "second-guesses the president's national security judgment."

If the appeals court upholds Robart's ruling, the case could go to the Supreme Court, said Peter Spiro, a law professor at Temple University in Philadelphia.

"It could go very, very fast," he added.

But for now, the Justice Department is operating without a permanent boss: Jeff Sessions, Trump's pick as US attorney general, has yet to be confirmed by the full Senate.

Judges William Canby Jr. and Michelle Friedland did not give a reason in their two-paragraph ruling.

But they told the states of Washington and Minnesota, which had filed the original suit against the ban, to provide supporting documents by 11:59 pm Sunday.

And the Justice Department was given until 3 pm on Monday to supply more documents bolstering its position.

"It's not exactly contempt of court, but it certainly is contemptuous, and it conveys a lack of respect for the independent judiciary," said Laurence Tribe, a constitutional scholar and Harvard Law professor.

For Spiro, the Temple law professor, Trump made a mistake by mocking Robart as a "so-called judge."