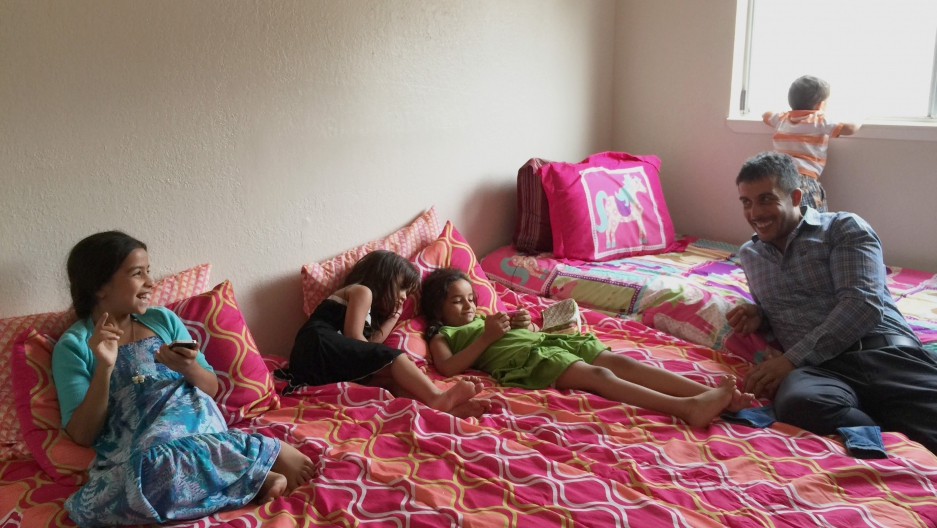 Gasem al-Hamad and his children are pictured here at home in Turlock, California. The family fled Syria's civil war, but now Hamad's brother is being blocked from being resettled in California as planned because of President Donald Trump's suspension of the US Syrian refugee program.

No more Syrian refugees. That’s what US President Donald Trump’s executive order on immigration makes sure of by blocking, at least temporarily, this group from entering the US. Hours after the news came, lives changed, including the life of one Syrian refugee family I have kept up with since they were resettled in Turlock, California, about two hours east of San Francisco.

It’s been about a year since I last saw Gasem al-Hamad, his wife, Wajed al-Khlifa, and their four young kids. They had been in the US about 10 months, ending a three-year journey from when they had fled their home in Homs, Syria.

It was also not long after the deadly terrorist attacks on Paris and a predictable rise in Islamaphobia. The chilling effects of that attack, the anti-Muslim bigotry — Hamad and his family felt it in Turlock. Khlifa, who wears a hijab, says she noticed that some glances turned to stares. “Since Paris … things changed,” she said.

But the family also moved forward. They celebrated their first Thanksgiving in the US. Hamad passed his driver’s test and was able to take the kids around in the family's new minivan. They found community at the local mosque, welcomed as one of the city’s first families from Syria resettled in the small city.

I wanted to call and hear how things were going for the family since Trump’s decision to temporarily block Syrian refugees.

At first, things seemed good. Hamad, with an interpreter on the line, told me his kids were doing well in school and that his wife just got her driver’s license. Hamad is also working steadily as a halal butcher. It's tough work, but he’s using a skill that he learned back in Syria.

But then talk turned to what is happening now. “My brother was supposed to arrive here on February 18,” Hamad says. “But because of President Trump’s decision, they put all reservation on hold. I’m very worried about my brother.”

Hamad’s brother also fled Syria and had a plane ticket for California. Everything was set; but Trump’s order has left Hamad’s brother stuck in Jordan, where he traveled after Syria.

However, the brother’s 24-year-old son and his son’s wife did manage to get to California just under the wire. “He arrived two weeks ago before President Trump issued his decision,” Hamad says of his nephew.

So now the family is split, and Hamad knows his brother can’t go back to Syria.

Hamad and his family barely made it out of Syria alive themselves. Not long after fleeing, their house was bombed. Neighbors emailed them photos of the rubble. “Look! This was your home!” they said.

At the same time, Hamad is not surprised that his brother is being blocked now. He has sensed change since Trump won the election. Turlock may be in California, but it’s rural, more conservative. Trump did well there.

“So, yes, there are some changes,” says Hamad. “Before, we felt that we were part of the community. After, the feeling has changed. We feel that we are strangers here.” 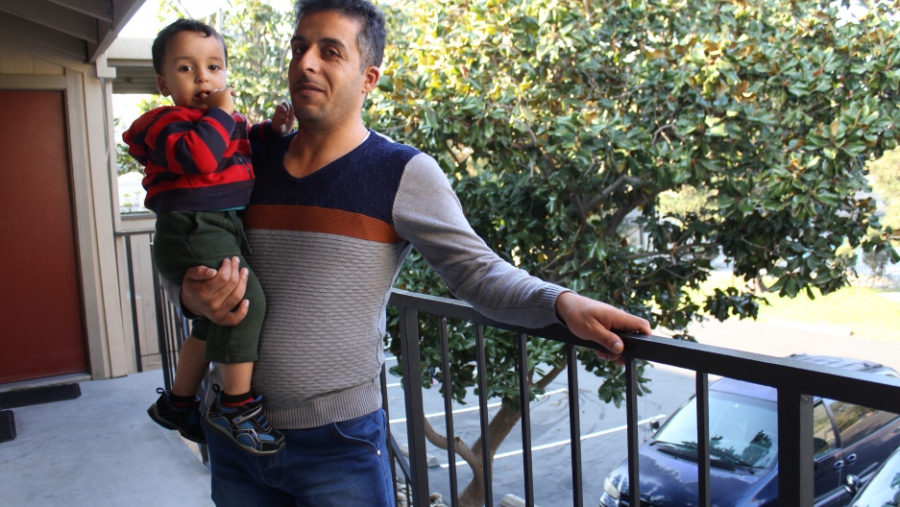 Gasem Al Hamad and his son, Mohamad, at home in Turlock, California. The Al Hamad family fled war in Syria and, after a three-year journey, arrived to the US as refugees.

Hamad wishes more people understood how tough it was to get to the United States. The vetting he got, that he says his brother got, was intense. Long interviews, over and over. His retina was scanned for biometric data. It took nearly three years for Hamad and his family to finally touch ground in California after fleeing Syria.

Still, Hamad knows that some people, including Trump, say that refugees can be dangerous, or that they get assistance while others from the US struggle. I asked him more about that.

And, he says, he gives back. “For example, I came here, I work, I pay taxes, I bought a car. I helped this country,” he says.

I asked him how he explains all of this to his kids, especially his oldest daughter, Arwa, who is 10. He says he is not sure what to say, but he knows that talk about the news comes up at school.

Turns out, Arwa has also been teaching her parents things about the US. “Two weeks ago, there was Martin Luther King Day,” Hamad says. “My daughter came to me and told me today we have a big celebration. I didn’t know about that.”

This fear that Hamad says fuels the racism and keeps families like his out of the country — he wishes it would go away.