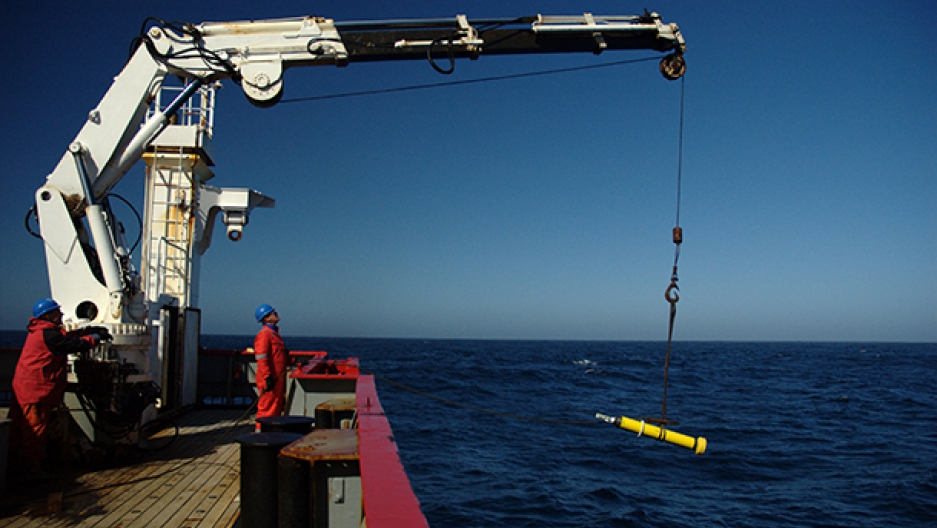 An Argo float being raised out of the Bellingshausen Sea is shown here. Argo floats are robotic instruments that measure ocean data and transmit it to satellites.

A new analysis of sea surface temperatures from an independent source corroborates updated global warming data released in 2015 by the National Oceanic and Atmospheric Administration.

The results contradict allegations from some Republicans on Capitol Hill that NOAA manipulated its 2015 data to show continuous global warming, since earlier NOAA research had suggested the Earth was experiencing a warming "pause" or hiatus.

Between 1998 and 2012, NOAA research based on sea surface temperatures seemed to suggest that average global temperatures were not rising. This data did not support the theory of climate change, and skeptics were quick to use these figures as proof that global warming was a "hoax."

But in 2015, NOAA updated its research with new data that does indeed show a steady rise in global temperatures. This outraged some politicians who claimed that the numbers had been recalibrated to please climate action proponents on Capitol Hill.

Zeke Hausfather, a research scientist at Berkeley Earth in California and one of the lead authors of that study, explains it this way: “In 2015, NOAA published a paper in Science, in which they released a new version of their sea surface temperature records. They updated it from version three to version four. This new version showed a lot more warming than their old version. It roughly doubled the amount of warming reported since 1998.”

Hausfather says the errors in the data arose from changes in the way scientists measure ocean temperature and in the methods they use to interpret that data. Oceans account for about two-thirds of Earth’s warming, so scientists have been trying to develop new and more accurate tools for measuring water temperatures across the globe.

Until the 1990s, the vast majority of measurements came from ships. It was pretty basic: intake valves pulled in ocean water to cool the ship’s engines and scientists stuck a thermometer in it, Hausfather says. In the early 1990s, governments around the world started investing a lot of money in modern, high-quality ocean monitoring systems. There were initially mostly buoys, but soon after they began to use satellites, as well. Hausfather believes this is how inaccuracies crept into the data over time.

“Both the NOAA record and the record by the UK's Hadley Center are what we call composite temperature records,” he explains. “They take data from a lot of different types of instruments, like ships and buoys, and smush them all together into a single, long-term record.”

The problem is that each of these methods measure temperature differently. So when researchers combine the data, they have to make “some judgment calls on how to handle the transition from one to another,” Hausfather explains.

Hausfather wanted to see what would happen if they didn’t try to combine the data. What if they used data from just one type of instrument at a time? He says the last two decades have seen an unprecedented amount of new Earth observation data, much of which is not being used by current monitoring groups.

Hausfather's team took data from ocean buoys, satellite radiometers and Argo floats — which are “awesome little robots that float around the ocean and dive deep down and come back up every few days, and then send their readings up to the satellites automatically," Hausfather says. "It turns out that all three of those records — the buoy record, the Argo record, and the satellite record — agree almost perfectly with the new NOAA temperature record."

Hausfather objects to the way some members of Congress have reacted to the new NOAA data. The head of the House Science and Technology Committee, for example, accused NOAA scientists of “cooking the books,” and even demanded access to all the scientists' emails.

“In general, the way science works is when you disagree with the result, you don't go after the scientists' emails — you ask other scientists to replicate it,” Hausfather says.

“Science is all about uncertainty,” he continues. “The problem in a lot of cases is that people interpret, ‘This is uncertain,’ as, ‘We know nothing.’ Scientists have said multiple times that we're 95 percent certain that the majority of warming in recent years is due to humans. Ninety-five percent is a pretty good number. If 19 out of 20 doctors you talked to said that you had a tumor, you probably would want to do something about that, even if that one out of 20 was less sure.”