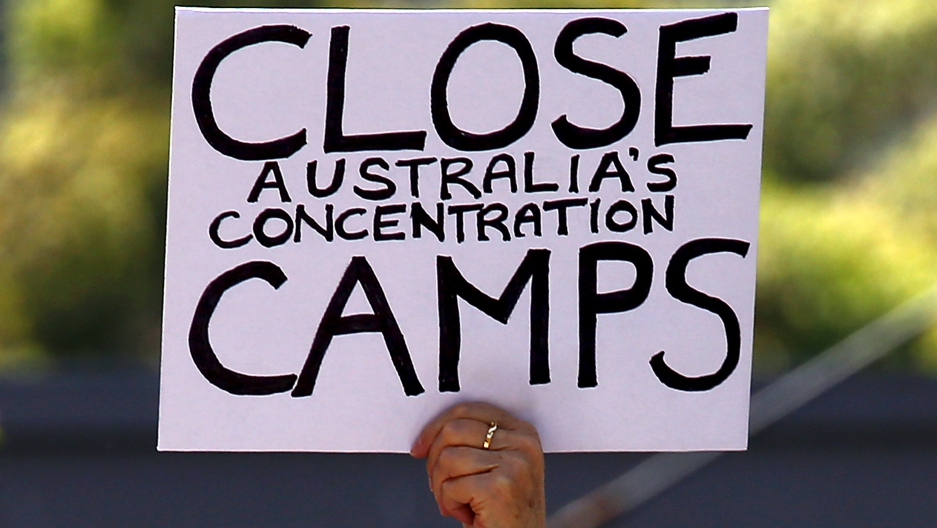 A protester holds a placard during a rally in support of refugees currently being held in Australia's offshore detention camps in Nauru and Papua New Guinea. Many Australians want the 1,250 refugees being held at the two camps to be allowed to live in Australia.
Credit:

UPDATE: This story was originally published on February 3. On April 22, 2017, the Trump Administration said it would honor an Obama-era agreement with Australia, under which the United States would resettle up to 1,250 asylum seekers stuck in offshore processing camps on two South Pacific islands: Manus in Papua New Guinea and the tiny island nation of Nauru. Back in January, President Donald Trump had described the deal as "dumb".

In Sydney, Vice President Mike Pence said the deal would be subject to vetting and that honoring it "doesn't mean we admire the agreement." Part of the agreement is that in return for the US taking the refugees from Manus Island and Nauru, Australia will resettle some refugees from El Salvador, Guatemala and Honduras who are in refugee camps in Costa Rica.

The flap over US President Donald Trump's phone call with Australian Prime Minister Malcolm Turnbull was about what the US leader allegedly said. But focusing on the bravado of his words may obscure the larger point.

So let's take a second look. In November 2016, in the final months of the Obama administration, the US government struck a deal with Turnbull to accept up to 1,250 refugees who have been kept in Australian off-shore detention centers, some for several years.

"This current government in Australia has been quite determined to say that any adult who tries to reach Australia by boat will never settle in Australia," says Stephanie March, North America correspondent for the Australian Broadcasting Corporation. "They're trying to find third countries to take these people."

In the meantime, refugees are languishing in the off-shore camps: one in Narau, a tiny island country in Micronesia, and another in Manus, Papua New Guinea.

"The Australian government has a lot of sway with countries in the Pacific region and it's been an on-and-off thing we've had going on for about 10 years, putting people in these detention camps," says March. "It's seen as a deterrent, so that people who try to come to Australia by boat, who try to risk their lives as refugees or asylum-seekers, don't try and make that dangerous journey. That's what the backers of these policies say."

But off-shore detention facilities also remove a lot of the legal responsibilities that Australia has under the international agreements and treaties on refugees. What's more, the media has effectively been barred from visiting the two camps, but reports coming out from NGOs, human rights workers and the asylum-seekers themselves are grim.

"We just hear horrible reports about the conditions in these camps," says March. "You've got diseases like malaria, you've got dengue. It's also obviously incredibly mentally traumatic for people to be kept in detention in these places with no idea of what their future holds for years and years on end. We've seen a lot of asylum-seekers and refugees in these camps try and self harm. Some have committed suicide."

On Friday, an asylum-seeker in the camp on Nauru was flown to Australia for treatment because of complications with her latest pregnancy.

The overseas detention camps are deeply controversial in Australia and have been an embarrassment for the country's political leaders. The fact that Turnbull was able to reach an agreement with the United States to take the refugees out of the camps was hugely important, says March.

"It scored political points for Malcolm Turnbull. [The prime minister's] deal with Obama was seen as a kind of coup. It benefitted him politically, hence he was very, very hopeful it would be maintained and continued by Obama's successor."

Turnbull says the refugee resettlement deal is still on. President Trump hasn't weighed in formally, but March says his own actions could make honoring the terms impossible.

The majority of the refugees covered by deal come from Iran and Iraq, and some from Somalia and Sudan — four countries on Trump's immigrant and refuee restriction list.