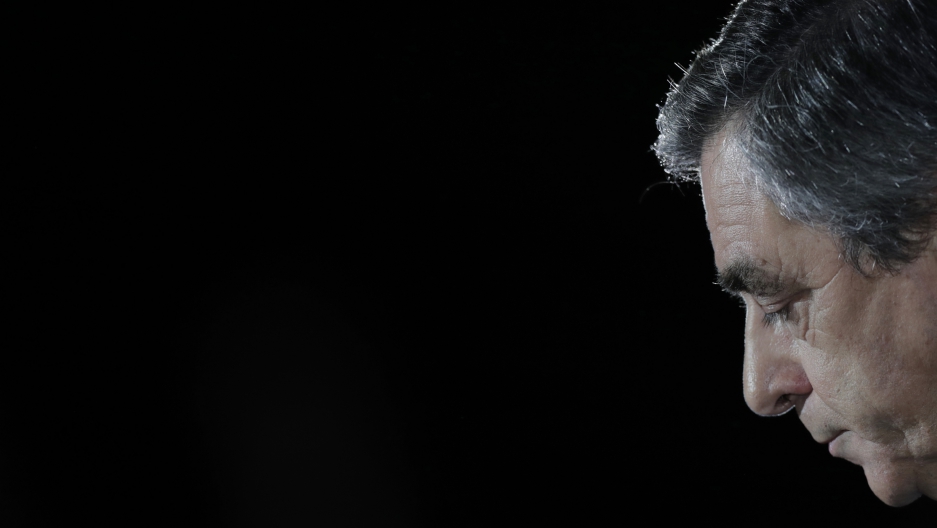 François Fillon, a member of The Republicans political party and 2017 presidential candidate of the French center-right, attends a political rally in Charleville-Mézières, France, on Feb. 2, 2017.
Credit:

François Fillon’s chances of surviving this latest political scandal are close to nil.

Fillon, a former prime minister who, until a couple of weeks ago, was the frontrunner for president of France, is accused of putting his wife and children on the government payroll for jobs they allegedly never did.

“It seems really hard to imagine at this point that he can piece together his campaign and continue as it was a couple of weeks ago,” says Time magazine correspondent Vivienne Walt. “It really does seem that if he is not completely out of the race, then he is mortally wounded.”

The 62-year-old Fillon, the candidate for the center-right Republican party, originally ran as “Mr. Integrity” and a champion of austerity — making the allegations particularly damning, says Walt. “Here was the 'drain the swamp’ candidate," she said, referencing a Donald Trump campaign slogan. "He’s a conservative, Catholic, strong family values, and he came in as an anti-bling-bling candidate. The straight ace.”

Now, Walt says, he just seems out of touch. “[Voters are really angered by] the attitude that the Fillon family had in response to the scandal when it broke, which could be boiled down to 'What’s the big deal here?'"

At a rally in Paris on Sunday, Fillon said he is the victim of a "smear campaign.” And he has called the alleged scandal “a plot” against French democracy.

Walt says Fillon didn’t break the law by hiring his family members or paying them large sums of money — if they actually did the work. But he has confirmed the electorate’s cynicism about the ruling class. “For so many years, to be a politician in France has been almost a carte blanche financially. The privileges, materially, are just enormous. You have real red carpet treatment everywhere. And this has begun to irk people, as they become much more aware and connected to what’s happening among the cloistered elite in Paris.”

This perception of a country ruled by a political elite is helping the far-right, anti-immigration candidate Marine Le Pen. Le Pen is the scion of a political dynasty. And Walt says it’s ironic that she can come out of all of this looking like a working-class hero. “Marine Le Pen herself comes from a wealthy family outside of Paris. She does not come from the hinterland whatsoever.”

But the difference is that Le Pen never campaigned as a squeaky clean paragon of morality.

Le Pen believes Trump’s populist victory in the US boosts her chances of becoming France’s next president. Walt says the voters agree. “Trump’s victory had a major impact psychologically in France because it was seen as a very clear signal that someone like Marine Le Pen could win, whereas just recently it would seem to be absolutely improbable.”

According to the latest polls, Le Pen would win the first round of the French election if it were held today but would lose the second round on May 7.

But Walt says anything could happen. “This is the fourth presidential campaign in France I will have covered. And it seems really impossible to know which way it will go," she remarks. "I could never say that before. French politics had always seemed like a predictable, procedural affair. And that really is no longer the case.”