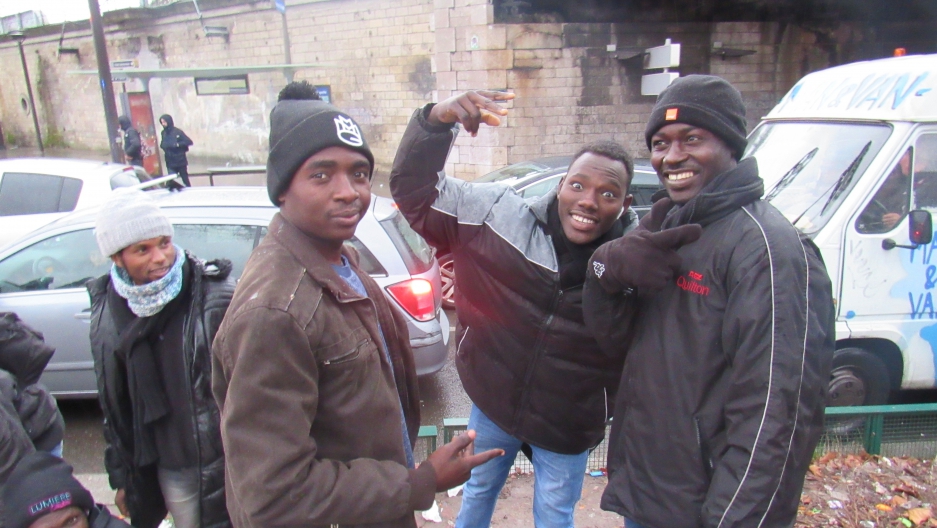 Abdallah Khalil, right, stands with friends in northern Paris. Khalil arrived in Paris in December and hopes to get asylum in France.

On a rainy winter day, Nessar Ehmad stands in front of the gates of the new humanitarian migrant center in northern Paris. He’s from Pakistan and arrived in France after crossing through a long line of countries.

“Turkey, Iran, Bulgaria, Serbia, Hungary, Austria, Italy and France,” he rattles off in one breath.

In Paris now for a couple of weeks, he has no place to sleep.

“The camp is closed,” he says about the migrants’ center. He points to a nearby highway overpass and explains in broken English that he sleeps underneath it at night.

When the camp in Calais, known as the Jungle, was dismantled in mid-October, 4,000 migrants were bused to housing centers all across France. Now, migrants are setting their sights on Paris and the new humanitarian center that opened in a northern part of the city in November is always filled.

The center, which serves as a temporary shelter and processing center, can house up to 400 people and will soon expand to take in more. But not everyone who needs help can get it. 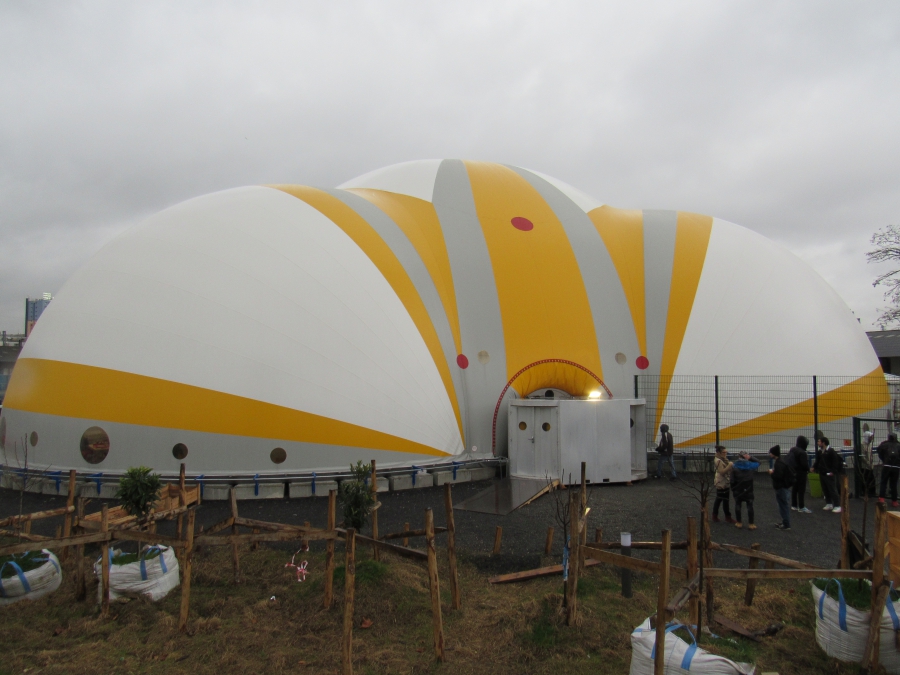 This is the entrance of the new humanitarian center for migrants in northern Paris.

Down the road, men huddle over a warm subway grate on a muddy highway median. They’re using blankets to shield themselves from the pouring rain. But they are smiling, laughing and seem to be in good spirits.

Abdallah Khalil, 26, is from Darfur in Sudan, like many of the young men here. He left home in 2014 because of the war there. After a long trek through Libya and Italy, he made it to Paris last month. He tried sleeping outside the gates of the migrant center to secure a bed, but he didn't get in.

“I wait there two days,” he says, adding that he finally had to join the group on top of the subway grate to keep warm.

When I ask how he can bear sleeping outdoors in this cold, he says it’s no big deal compared to the terrifying three-day boat trip he took across the Mediterranean. He had wanted to go to England, but he’s given up on the idea and plans to request asylum in France.

“We want to continue our education. Everyone here has ambition,” he says. 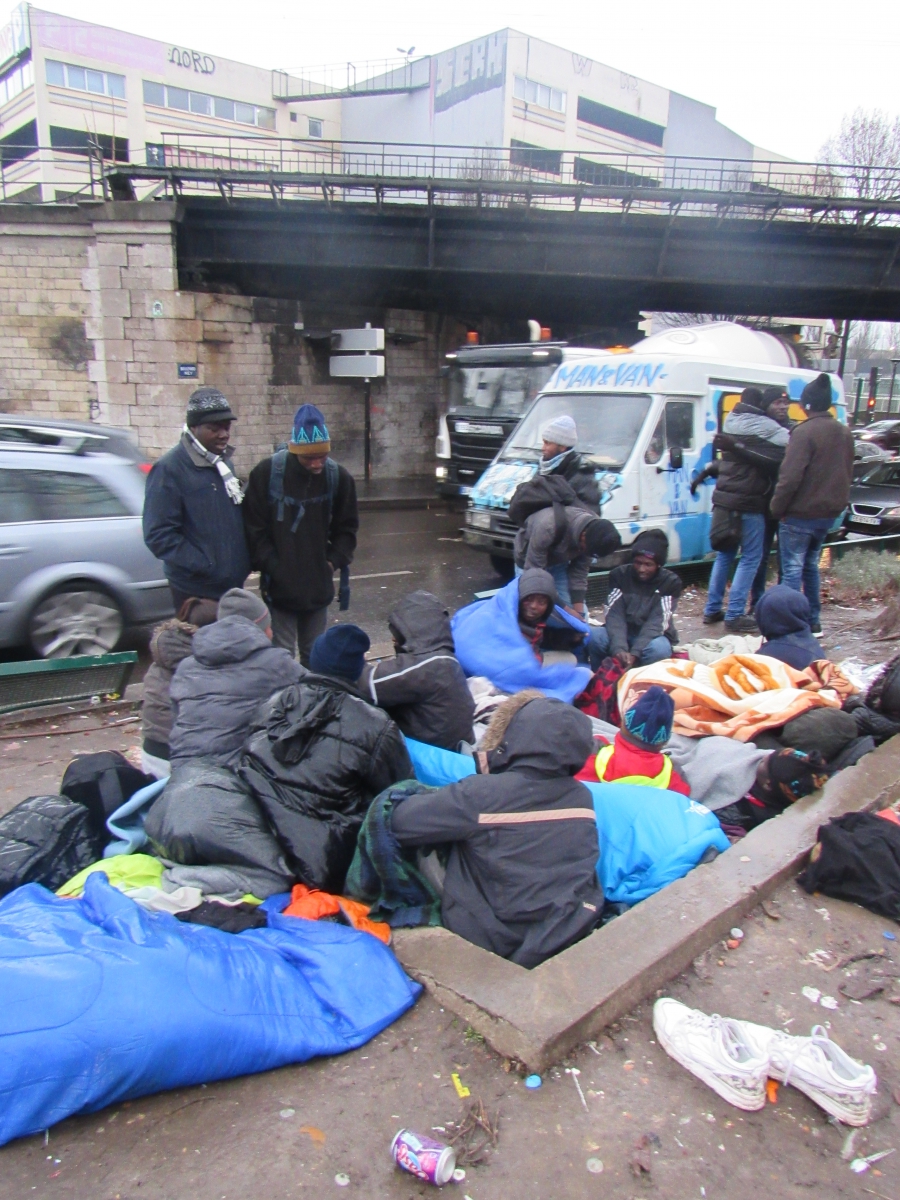 A group of Sudanese migrants huddles on top of a subway grate in northern Paris to keep warm.

After France dismantled the Calais Jungle, migrants like Khalil began heading to Paris, as many as 50 to 80 a day, according to Paris officials. In December, the French nongovernmental organization Doctors Without Borders, or MSF for the initials of its French name, decided to bring in a mobile clinic, after noticing hundreds of homeless migrants on the streets of the capital. But even they have trouble keeping up with the demand.

That leaves volunteers to fill the gap.

In the Pajol neighborhood of Paris, about two dozen homeless migrants stand around a picnic table set with hot tea dispensers and bread, hard-boiled eggs and bananas.

“We’re getting about 40, 50 or even 100 people [a day],” says Laurent Pichelin, a retiree who’s part of a group of neighbors that organizes these meals. “Some come later in the day because they live in remote hotels where they don’t get food, so they travel here to get something in their belly.”

Pichelin laments that many of the men here don’t have winter coats or warm shoes. One 16-year-old from Eritrea is wearing only a light hoodie and sneakers in subfreezing temperatures.

But the donations that used to flow into Calais are now arriving in Paris. Heather Young, a British volunteer who worked in migrant camps around Europe, recently started her own group, Paris Refugee Ground Support. In the group’s warehouse, she and her volunteers sort through blankets, yoga mats, shoes and clothes that they distribute at night in a van.

“This was all filled two days ago,” she says, pointing at empty warehouse shelves. “But we’ve given out so much stuff that we’re looking for more blankets.”

Young says she has to walk a fine line, though. One rainy night, she tried to hand out blankets and garbage bags (for protection from the rain) to men sleeping outside the migrants’ center. But she says the police told her to stop. They don’t want migrants on the streets getting too comfortable,” she says.

It happens several times a night, she says.

Early in January, MSF accused the police of harassing migrants, saying police used tear gas to disperse men sleeping on the streets and took away their blankets.

“We need to stop this national sport of questioning the actions of the police,” he said. “They have no orders other than to help provide shelter and safety for vulnerable people.”

As for Khalil, the man from Darfur, he’s no longer sleeping on a subway grate. He finally managed to get into the migrant center and requested asylum.

He might get it, though the odds are against him. In 2015, fewer than one in three asylum requests were granted in France.