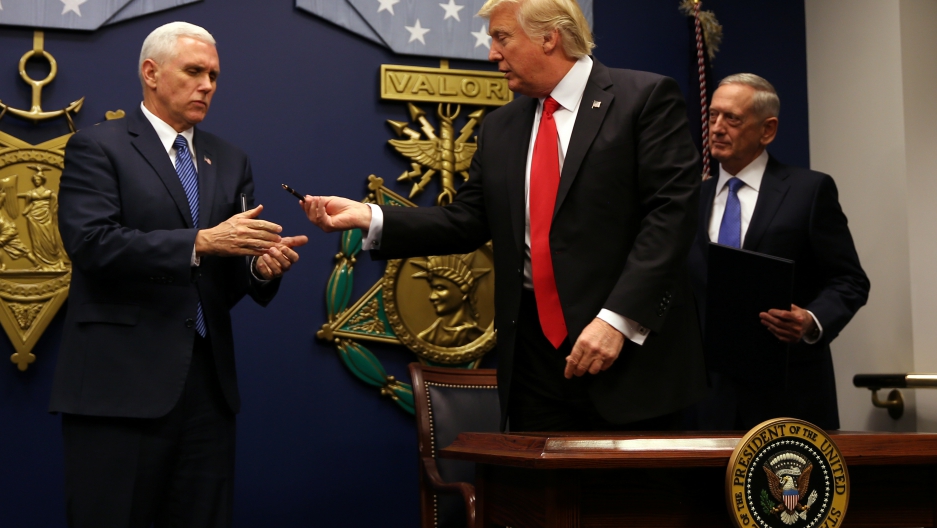 US President Donald Trump reacts after signing an executive order to impose tighter vetting of travelers entering the United States, at the Pentagon in Washington, January 27, 2017.

Barack Obama had set a goal of admitting 110,000 refugees this year — a number that President Donald Trump sliced in half.

But before he lets any more refugees in, he wants to toughen up the vetting process — make it "extreme." Of course, the US system for vetting refugees is already incredibly stringent and takes a minimum of 18 to 24 months.

How Trump changes the process remains to be seen — and it's a question of the minds of many people who are taking part in our #100Days100Qs project. In fact, of the roughly 1500 or so tweets we've seen with the hashtag, including retweets, we've received 159 different questions. And the way he will deal with immigrants and refugees is a major theme throughout.

This question is based on a suggestion from Twitter user @AmCivCultEntrp.

What do we know so far? In his executive order, President Trump said he would prioritize admission of religious minorities persecuted in their home countries. That could somehow become a factor in refugee vetting.

And on Tuesday, Homeland Security Secretary John Kelly said he hoped to develop closer ties with foreign governments, in order to get more complete data on refugee and immigration seekers. He also said the government would seek information about foreign nationals' social media and other online data.

Whether that's what Trump means, however, when he says "extreme" remains to be seen.

So Mr. President, we wondered if you could tell us what sort of changes you expect when you talk about "extreme" vetting. Click here to tweet today's question.