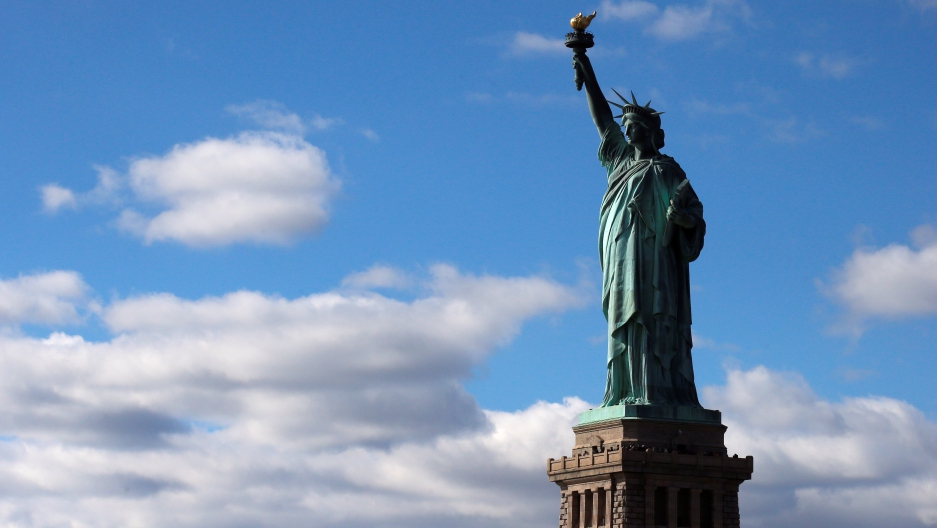 The Statue of Liberty is seen on the 130th anniversary of the dedication in New York Harbor, in New York City.

As Americans grapple with Donald Trump's ban on travelers from seven Muslim-majority countries, it's a good time to point out a little-known irony. The Statue of Liberty — that symbol of American freedom and diversity that has greeted immigrants for generations — was originally modeled after an Arab woman.

The statue's designer, Frédéric-Auguste Bartholdi, was enamored with Egyptian pyramids and monumental sculpture. According to historian Edward Berenson, in the 1860s, Bartholdi decided to build a monument to commemorate the opening of Egypt's Suez Canal.

"And that monument was going to be a woman in the southern opening of the canal holding up a torch over her head and that woman was dressed in Arab peasant garb,” Berenson says. But when the ruler of Egypt, Khedewi Ismail Pasha, went bankrupt, the colossal Suez sculpture project was jettisoned.

But the artist soon found a way to recycle his design. “A couple of years earlier, Bartholdi and his friends decided they were going to give a gift to the United States that was going to celebrate the centennial of the American Revolution,” Berenson explains. “And then, Bartholdi thought, ‘Ah! I’ve got a great idea! I can reuse this image but change it to fit the American Revolution.’”

Bartholdi changed the woman that was originally dressed in Arab garb into a Greco-Roman goddess of liberty. And the Statue of Liberty, as we know her today, was born.