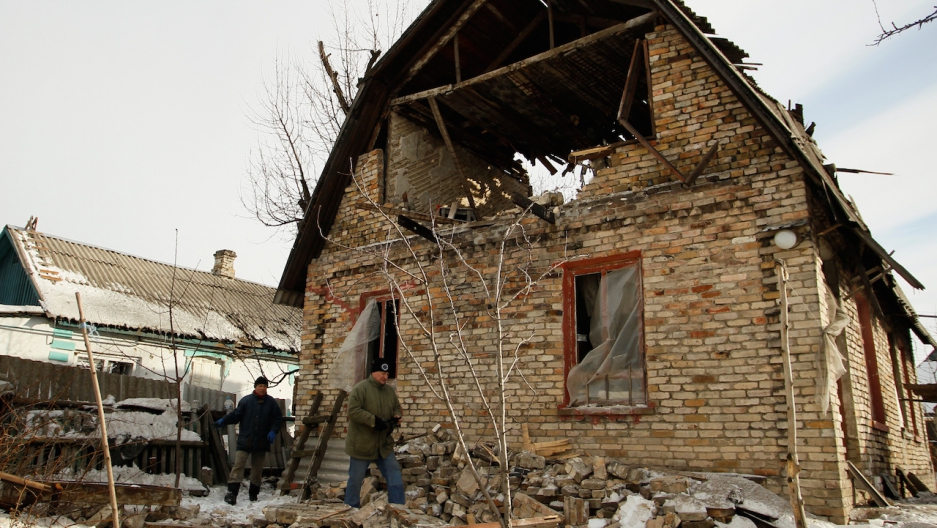 Men walk near a damaged house, which according to locals was caused by recent shelling, in Makeyevka (Makiivka), Ukraine, a town controlled by the forces of the self-proclaimed Donetsk People's Republic, Feb. 1, 2017.

The head of NATO warned on Wednesday that Ukraine faced its worst violence "in a long time" as global alarm rang out over a spike in bloodshed that has killed 19 people in the European Union's backyard.

Government forces and Russian-backed separatists exchanged mortar and rocket fire for a fourth day around the flashpoint eastern town of Avdiivka that sits just north of the rebels' de facto capital Donetsk.

The Ukrainian military said three of its soldiers had died overnight while the rebels said as many civilians had been killed.

Hundreds of mourners laid flowers on Kiev's Independence (Maidan) Square as servicemen dressed in green camouflage fatigues carried the coffins of comrades killed in the east.

The Avdiivka clashes have left more than 20,000 people without heat or water in freezing winter weather with no signs of relief in sight.

The fighting comes at a potential watershed moment for Ukraine as fears mount in Kiev that staunch US support could wane with President Donald Trump looking to mend ties with Russian counterpart Vladimir Putin.

Moscow and Kiev have traded blame over who started the latest shelling attacks.

Kiev's main fear is that Putin may be trying to stamp his authority on eastern Ukraine to give him leverage over Trump on other global issues.

NATO chief Jens Stoltenberg did not blame Russia directly but did say it had "considerable influence" over the militia forces now on the attack.

"We call on Russia to use its considerable influence with the rebels to bring the violence to an end," Stoltenberg told reporters in Brussels.

"In Ukraine, we see the most serious spike in violence in a long time."

An emergency UN Security Council meeting on Tuesday also called for an immediate end to fighting in a near three-year conflict that has plunged Moscow's relations with the West to a post-Cold War low.

The council expressed "grave concern" about the resumption of serious battles in one of Europe's bloodiest conflicts since the 1990s Balkans wars.

The fighting began shortly after pro-Western protests led to the ouster of Ukraine's Russian-backed president in February 2014.

Moscow responded by seizing Crimea from Ukraine the following month.

The industrial hub of Avdiivka came under its first assault on Sunday by insurgents seeking to recapture territory along the front splitting the rival sides.

Residents such as 62-year-old Larysa were packing up to find shelter from the cold and violence.

"We slept very badly last night, the kids were awoken by shelling," she told AFP as she left town with her two granddaughters.

"A shell landed under our window but thank God it did not explode."

Yet there was no confirmation from Moscow or Kiev and Ukraine's Interior Minister Arsen Avakov said only that some repair work on damaged power lines had begun.

The fighting has severely damaged a coke plant that provides heating for the blue-collar town of some 25,000 people.

The Organization for Security and Cooperation and Europe (OSCE) is responsible for monitoring ceasefire violations and organising peace talks between envoys from Russia and Ukraine.

In the latest round held in Minsk on Wednesday, OSCE envoy Martin Sajdik said both Kiev and Moscow had called for a "full and all-encompassing truce to be introduced across the entire war zone".

Such pleas have generally been accepted by the rebels before being broken by both sides.

The conflict has killed nearly 10,000 people — more than half of them civilians — since it erupted in April 2014.

Russia gives political backing to the rebels but has denied accusations from the West and Kiev that it is directing the insurgency or has sent troops into the war zone.