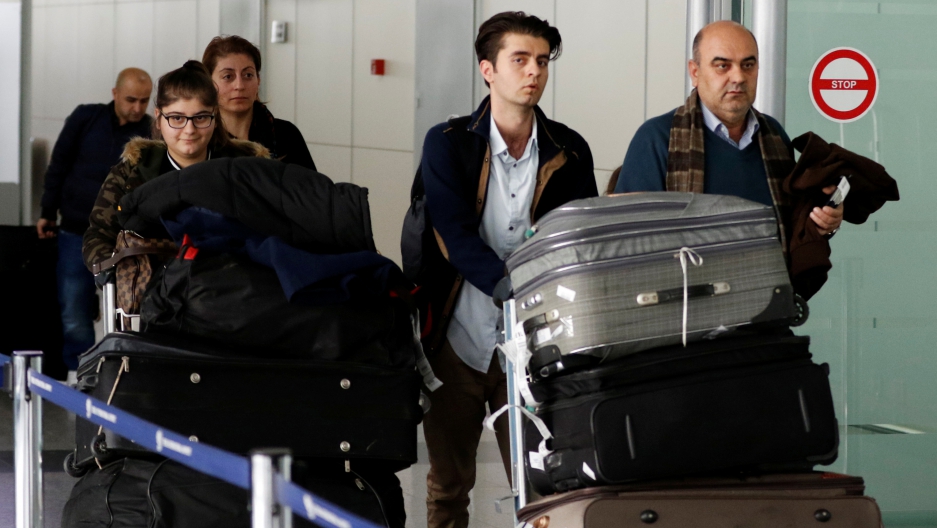 Nineteen-year-old Bnyad Fuad and his family push their belongings after returning to Iraq from Egypt, where they were prevented from boarding a plane to the US, at Erbil International Airport, Jan. 29, 2017.

Editor's note: After this story was published, the office of Congressman Jim Cooper (D-Tenn) announced that the Sharef family, whose entry to the US was initially thwarted by President Donald Trump's travel ban, had been notified that they are cleared to arrive, after the Department of State advised the US Embassy in Baghdad that it is “in the national interest to allow Iraqi special immigrant visa holders to now travel to the United States.” This story tells what the Sharefs endured before that news arrived.

Nineteen-year-old Bnyad Fuad was supposed to be starting his new life in Nashville, Tennessee, on Sunday. Instead, he and his family were back in Erbil, Iraq — homeless.

Like hundreds of US-bound travelers from seven nations identified in President Donald Trump's immigration order, this Iraqi Kurdish family had been barred from going to America. They had gotten as far as the Cairo airport.

“As soon as we heard the decision by the Egypt Air staff that they will not allow us to board the flight, we were completely broken,” says Bnyad, oldest of the three children of Fuad and Arazoo Sharef. “I mean, we knew it has to do something about what Trump has been intending to sign, but the staff didn't give us any explanation.”

Bnyad says all he could think about, as his family was led away from the gate, were the years of preparation and planning that were suddenly coming undone.

After a long vetting process Bnyad’s dad, Fuad, had secured visas for his family through a program that resettles Iraqis who had worked for the US. Fuad had worked in Iraq as an interpreter for the US Agency for International Development.

They were to fly to Nashville, home to the largest Kurdish community in the United States. Bnyad would attend college. His younger sisters would go to Nashville schools. His parents would start a new chapter in their lives.

Bnyad had been to America before, for four weeks on a State Department student exchange program in 2013. His visit to Evanston, Illinois, just outside Chicago, had given him a taste of American life, and he liked it. It felt so different from Iraq, where he seemed to always live in the shadow of war.

“He really just grabbed the experience with both hands,” says Andrea Versenyi, Bnyad’s host mom while he was in Evanston. She recalls taking him to a raucous neighborhood block party the first night of his stay. "He said, 'Where I come from, adults don't play,'" Versenyi remembers. “He said it's very serious [in Iraqi Kurdistan.] 'Life is very serious. And this [party] is a wonderful thing.' And that touched me a lot.”

Versenyi was one of the first people Bnyad contacted after he and his family were turned back in Cairo.

“I started making calls to my senators, to my representatives, anybody who could try to give me more information,” Versenyi says. “I called immigrant rights organizations, and everybody was pretty much in the dark.”

Fuad Sharef shows his US visa to the media at Erbil International Airport, after returning to Iraq from Egypt, Jan. 29, 2017.

One immigrant advocacy group in Nashville learned about Bnyad and his family, and set to work. Lisa Sherman-Nikolaus, the policy manager for the Tennessee Immigrant and Refugee Rights Coalition, was in touch with Bnyad's father, texting and calling with updates about the family's status throughout the weekend.

“The Sharef family have a special interest visa which is something that the US government gives to people who have provided a service for the US military or the US government in Iraq or Afghanistan,” she explains, ”and so this is a person who is in great risk now that he's back in Iraq and who, really, our country owes a lot of debt to.”

Sherman-Nikolaus is intent on bringing the Sharef family to Nashville, as planned. "Tennesseeans at their heart are welcoming people," she says, "and when you reach out to them and explain to them the benefits of immigration, and the contributions that refugees make, they're incredibly welcoming."

Since the weekend, Sherman-Nikolaus has been pressuring authorities to take action to ease the travel restrictions put in place Friday. “We are working with the ACLU Tennessee and the America Muslim Advisory Council as well as the National Immigration Law Center,” she says, “all on the case of the Sharef family. And we have reached out to our members of Congress, we're asking them to intervene.”

"We have a large Kurdish community in Nashville. We're very proud of them, and this was going to be our latest addition," he says. "The Sharef family was coming on a special status visa ... so we were very disappointed, in fact we were shocked when suddenly they were turned back on the flight to the United States."

The hastily implemented presidential order has been clarified several times this week, first to allow green card holders from the seven banned countries to enter the US. On Tuesday, Department of Homeland Security officials announced that Iraqi nationals holding Special Immigrant Visas, such as Fuad Sharef and his family, would also be allowed to land in the US and request waivers. It remains somewhat unclear how the new vetting policies for permanent residents and SIV holders are being communicated and implemented.

Asked to comment on the Sharef family's experience, Daniel Hetlage, a spokesperson for the US Customs and Border Protection, said on Wednesday, "We cannot comment on specific cases."

"Applicants for admission bear the burden of proof to establish that they are clearly eligible to enter the United States," Hetlage said in an email. "In order to demonstrate that they are admissible, the applicant must overcome ALL grounds of inadmissibility."

Hetlage suggested that there may have been reason for the family being blocked from US entry, writing that there are "60 grounds of inadmissibility divided into several major categories, including health-related grounds, criminality, security reasons, public charge, labor certification, illegal entrants and immigration violations, documentation requirements, and miscellaneous grounds."

This could all take a while to sort out.

"I'm hoping it's just a Customs and Border Patrol screwup," says Rep. Cooper. "They are still denying that anyone with a Special Immigrant Visa has been turned away. We got an email from them on Tuesday, Jan. 31 saying that. So apparently they are not tuned in to this family."

Tennessee Republican Sen. Bob Corker, whose office is familiar with the case, has called for a revision to the executive order. “Our office is very closely monitoring a number of cases affecting Tennessee families or those seeking to come to Tennessee," says Micah Johnson, the senator's communication director. "And Senator Corker has spoken with the Trump administration about the issues associated with this executive order. He is pleased the administration is taking steps to process appropriate cases and we will continue to assist any Tennesseans impacted by the order.”

In Erbil, Bnyad and his family are camping out in his uncle’s apartment while they figure out their next steps. “We're caught up in the middle of this political decision that's affecting the lives of everyday people," he says. "Like, we have no say in either way of the politics, but our lives are deeply impacted by it.”

Before setting off for the US on Friday, Bnyad’s father had left his job, his kids had left school, they had sold their family home and donated their furniture.

“I mean, we sold our cars at half price … all to hurry to get to the states and build a new life,” Bnyad says. “We spent approximately $5,000 just on the tickets, and so, we lost that.”

Bnyad’s host mother in Evanston remains in touch with him. So does Becca Wadness, who helped coordinate Bnyad's student visit to the US in 2013. Now enrolled in a master's degree program at Harvard, Wadness has launched a GoFundMe campaign on the family's behalf. "We want to raise $20,000 to help the family with their immediate expenses in Iraq," she says, "and to help them buy new plane tickets when they are free to come to the United States."

"I just hope that in the near future we can be settled and live normally again, my sisters continue their education, and I can go to a university and continue my studies," says Bnyad Fuad. "I mean this is all we want right now. We just want to be settled again."