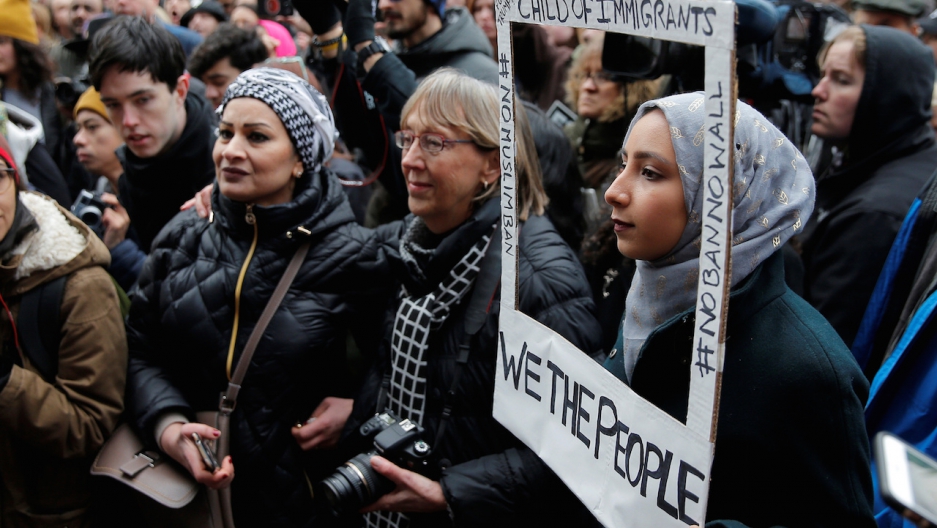 “This is just a temporary pause. That’s the point,” Krikorian says. “This isn’t the policy about how we’re going to screen people coming from countries where there are active jihad terror groups.”

Krikorian is the executive director of the right-leaning Center for Immigration Studies, a think tank. He is one of the leading intellectual architects of the movement to restrict immigration to the United States.

Trump's executive order bans the Syrian refugee program indefinitely. It suspends immigration for 90 days from Iran, Iraq, Libya, Somalia, Sudan, and Yemen. It also suspends the US program for admitting refugees from anywhere in the world for 120 days, while the government comes up with a stricter process for vetting them.

The process to gaining permission to enter the US can already be time-consuming. For Syrians and other refugees, it's especially difficult. The US has accepted very few of the nearly 5 million Syrians who have fled their homes since the war there started in 2011.

In fiscal year 2014, the US only accepted 105 Syrians. In 2015, that number was 1,682 and in 2016 the US resettled 12,587 Syrians. The vetting process can take 18 to 24 months for Syrians. Fewer than 1 percent of applicants make it through the initial screening by the United Nations Refugee Agency, which is required before the US will consider them.

Krikorian says it makes sense to suspend the refugee program, at least in the short term, so the administration “can figure out whether the screening we do now is appropriate or needs to be tightened. ... This isn’t an indication of what the actual policy three or four months from now will be.”

The order allows for exceptions for persecuted religious minorities, like Christians in Muslim countries.

Krikorian insists that it does not represent a "Muslim ban," as many opponents have characterized it. He says that the seven Muslim-majority countries named in the order were already listed as “countries of concern” when Congress passed the "Terrorist Travel Prevention Act” in 2015. Krikorian points to the fact that Muslims from other nations, like Indonesia and Saudi Arabia, are still allowed to enter the US.

“If, in three months from now, there’s a policy that says anybody who fasts during Ramadan shouldn’t come into the United States ... well that’s ridiculous and I’ll be against it then,” he says.

Homeland Security Secretary John Kelly said in a press briefing Tuesday that the order is a "temporary pause," not a ban. But, he said, “Some of these countries won’t be getting off the list any time soon," especially those "in various states of collapse." Kelly also said the department may work with other countries not named in the executive order — though some officials have suggested the list of banned countries could be expanded — to gain more information about people coming into the US.

While experts have called the ban a gift to ISIS recruitment, Krikorian blames the media, not Trump, for feeding jihadi propaganda. Krikorian says journalists have insisted on mislabeling the ban. “The news coverage of this is helping ISIS,” he insists. “Describing it in shorthand as a Muslim ban — or even taking that description seriously — is more likely to be helping ISIS than the actual policy.”

In the end, Krikorian says the backlash against the immigration order is “hyperbolic,” especially given what he considers the relatively small number of people detained.

White House Press Secretary Sean Spicer said on Monday that only 109 people out of 325,000 were stopped for additional screening after Trump's order. But news reports have proven those numbers to be false. The Daily Beast reports that 735 people who had encounters with border officials could have been barred from entering the United States, while the Washington Post puts the number of people affected by Trump’s travel ban at 90,000 — accounting for everyone from the seven banned countries who received a US visa in 2015.

Krikorian says he’s heard the dramatic stories of refugees blocked from returning to school or reuniting with relatives after the ban. He says he feels sorry for them, but ultimately, he shrugs it off. “Of course, it’s going to create inconveniences for people,” Krikorian says. “Still, no foreign citizen has any right to come to the United States. None whatsoever.”

Some travelers with valid documents to enter the US have been questioned and held for up to 24 hours, often without access to lawyers. Others, refugees and people who have worked with the US military, are waiting for their chance to leave dangerous circumstances in order to start life in the US.