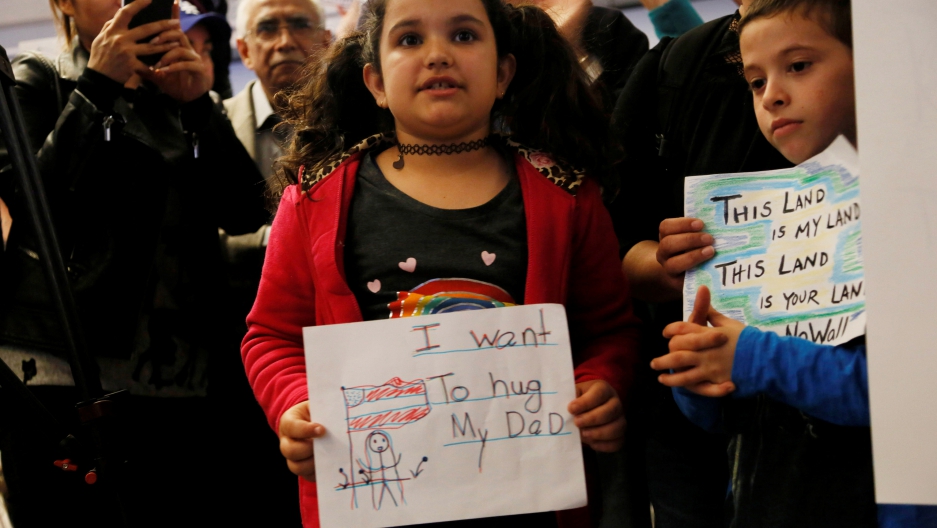 Seven year old Teija's father is stuck in Iran due to the travel ban. She holds a sign during a protest  at Los Angeles International Airport.

America is showing a new face to the world.

And the reaction from Tehran is one of ... confusion.

"What we are seeing [in the US] from here, it's a little bit crazy," says a Tehran resident speaking via Skype. He gave his name only as Behzad for security reasons.

Iran is one of seven countries included in an executive order signed this week by President Donald Trump. The order bans travel into the US for 90 days for citizens from Iran as well as Iraq, Libya, Somalia, Sudan, Syria and Yemen.

Behzad says many Tehran residents see the ban as a sharp escalation in ongoing tensions.

"They see it as animosity or actually an act of war in a way," he laments. "Just come out and say it: You don't like us. We can deal with that. Do not make up this cockamamie story about 'We want to vet people,' or something like that."

But when Behzad talks to Tehran residents, he sees two competing interpretations of Trump's rise.

"One is that they're just calling him a lunatic," he says. "But the Friday prayer imams, they were praising him. The populist slogans of Mr. Trump, he said, 'America First,' so this is welcome news for people here. They say, 'Okay if he concentrates on America, then he'll probably not bug us any more. ... He wants to build his own country, he doesn't want to be the police of world.' So they were praising him."

Behzard's brother, who goes by the nickname Py, lives in California and is in close touch with his sibling. Py also didn't want to use his real name. He's a dual American Iranian national and this week he canceled plans for an upcoming visit to Iran because of uncertainty about his ability to enter and exit the two countries.

"I had to apologize to my mother because she was hoping to see me soon," Py says. "We definitely understand the security part [behind the travel ban]. But most of the people in 9/11 [were from other countries], none of those countries are on the ban list. So if we're gonna do it, let's do it right and make a policy that's going to make us secure."

Both of the brothers compared Trump to the former Iranian president, Mahmoud Ahmadinejad. He also ran on a populist platform, winning the presidency in 2005. Ahmadinejad's economic policies sparked instability in Iran and he deepened the rift between Iran and the international community before stepping down in 2013.

"Behzad sent me a picture of Donald Trump's face and his head was opening and Ahmadinejad was coming out," says Py. "That was a classic."

His brother also sees a similarity.

"I personally believe that every country in the world deserves to have a chance to have an Ahmadinejad," Behzad says, laughing.

Both siblings argue that Iranians' personal bonds with the US will remain strong, despite the political turmoil.

"Long term, I think people, they overcome it," Py says. "They understand at least over there — and people I talk to here also — that the governments a lot of time they don't speak for the majority of people."