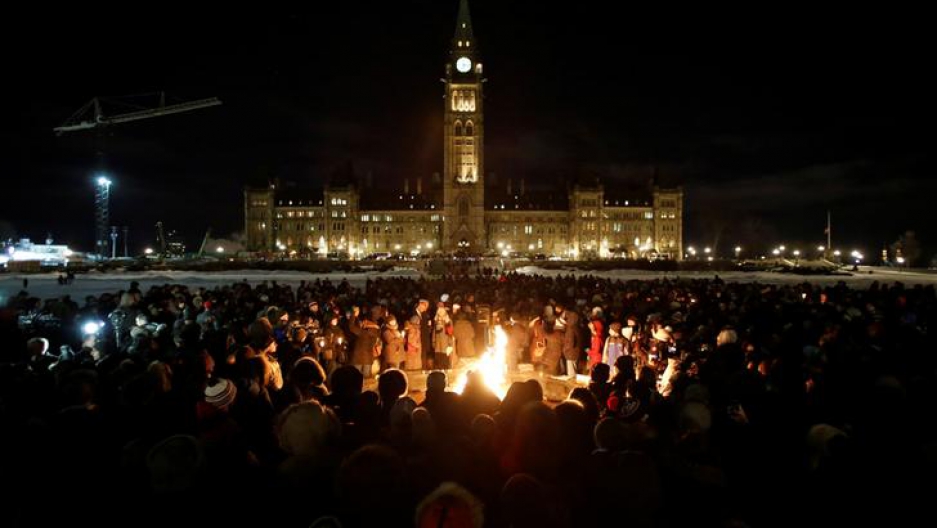 People gather around the Centennial Flame on Parliament Hill during a vigil following a deadly shooting at a Quebec City mosque, in Ottawa, Ontario, Canada, on Jan. 30, 2017.
Credit:

Many members of Quebec City’s Muslim community are clearly frightened by the recent shooting attack that killed six worshippers at a mosque and critically wounded five others. But as CBC reporter Jonathan Montpetit observes, they’re getting support from their neighbors of all faiths.

“The Muslim community in Quebec City is fairly close knit, it’s not that large a community, and they’re really looking to officials to help them figure out how they can better secure their places of worship," Montpetit says. "Police have stepped up their patrols not only in the city and but around the province. They’ve experienced incidents of Islamaphobia in the past but nothing on this level."

There’s been a very public show of support for the families of victims and the city’s Muslim community in general. On Monday, at an emotional news conference at City Hall, Montpetit says, “Muslim leaders came out and thanked the premier and thanked all Quebecers. They were visibly emotional at the overwhelming shows of love and support that had been pouring into the community from Quebec City, from the rest of the province, and across Canada, and they certainly indicated they were taking a fair bit of strength from that outpouring of support.”

On Tuesday the suspected shooter, Alexandre Bissonnette, was charged with six counts of murder and five counts of attempted murder. Prime Minister Justin Trudeau on Monday called the shooting a "terrorist attack."

"It is heart-wrenching to see such senseless violence," he said in a statement. "Diversity is our strength, and religious tolerance is a value that we, as Canadians, hold dear."

Now, he stands accused of gunning down six worshippers at a Quebec mosque in one of the worst attacks ever to target Muslims in a Western country.

The 27-year-old grew up in a quiet suburb of Quebec City, posting online about friends, family and food.

He studied anthropology and political science at nearby Laval University, and most recently lived in a fourth-floor apartment with his twin brother that neighbors described as often noisy.

The apartment is just 0.6 miles from the Sainte-Foy mosque where Bissonnette allegedly shot worshippers in the back.

His Facebook account has since been deleted, but an analysis of stored pages by SITE Intelligence Group — a US-based organization that monitors extremists' activities — described his posts as "largely apolitical."

"It is a cruelly banal profile that resembles many others and it is extremely difficult to perceive the evolution," David Morin, co-director of the Observatory on Radicalization and Violent Extremism, told AFP.

Although Bissonnette was not affiliated with any group, he appears to have embraced a "right-wing, a bit reactionary, somewhat anti-immigrant, anti-feminist ideology," said Morin.

SITE Intelligence Group noted that on his Facebook page, "There were no posts about Al-Qaeda, the Islamic State (ISIS), or Muslims, nor were there any posts related to immigration."

But he "liked" the pages of Le Pen, Trump and Quebec's Generation Nationale.

People who knew him described him as having lately become a xenophobe, an ethnic nationalist and an online troll, but not a racist.

He denounced, for example, the flood of Syrian migrants into Europe last year.

"He was someone who made frequent extreme comments in social media denigrating refugees and feminism. It wasn't outright hate, rather part of this new nationalist conservative identity movement that is more intolerant than hateful," Francois Deschamps, who runs a refugee-support Facebook page, told The Globe and Mail.

One of Bissonnette's last online postings was a photo circa 2002 of himself as a boy in a military cadet uniform, stone-faced.

“They’re struggling, it’s quite a shock here to residents, you know Quebec City has an incredibly low murder rate so in one night, you have six dead, so they’re just not used to that level of violence. This is traditionally a festive time in the city, the Winter Carnival is going on, it’s a time when people can take a break from the cold weather and enjoy themselves, and that sense of festivity is just not present at the moment, the city seems to be just sleepwalking through this nightmare.” 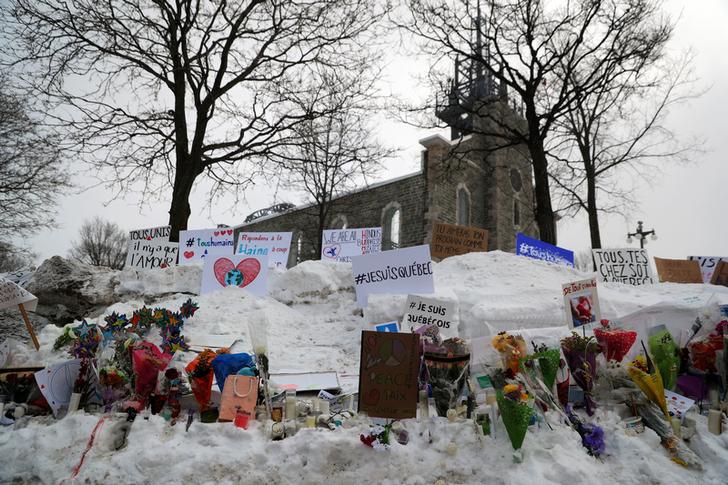 The memorial near the site of a fatal shooting at the Quebec Islamic Cultural Centre is pictured in Quebec City, Canada, on Jan. 31, 2017.
Credit: