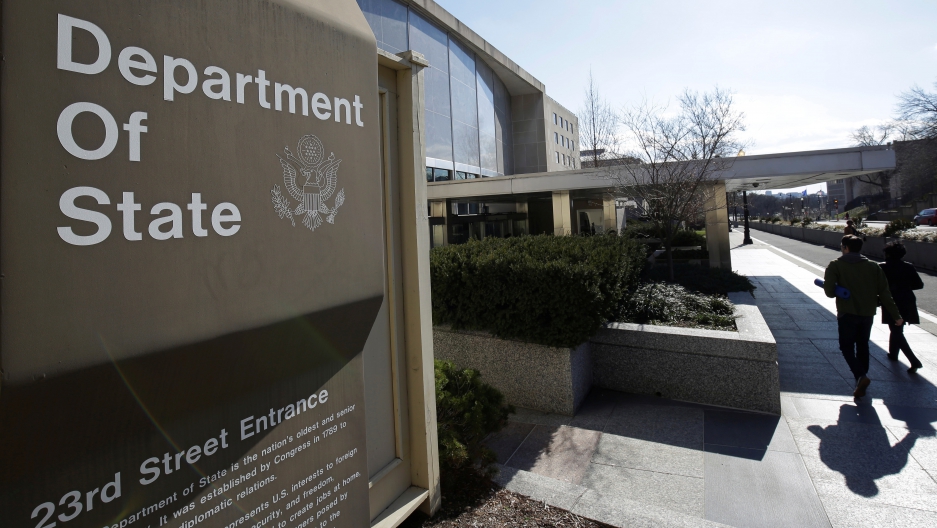 The State Department building in Washington, DC, is pictured here.

Get with the program or get out.

That was the stark message from White House spokesman Sean Spicer on Monday in response to news that State Department officials have drafted a memo of dissent. The memo was leaked to the Lawfare blog.

As many as 900 diplomats are believed to support the memo, which objects to President Donald Trump's executive order on immigration. They say it hurts America's image abroad and will inflame anti-American sentiment.

The memo is apparently being circulated through the State Department’s existing “dissent channel.”

We reached out to a former ambassador, Jonathan Addleton, to find out how that channel works.

“Basically, any officer at any level can write a message [on any issue],” Addleton explains, “and be assured that the front office or the secretary [of state’s] office will read it and be obliged to respond.”

Addleton retired on Jan. 20 after more than 30 years with the foreign service. For much of that time, he worked with the US Agency for International Development. He also served as the ambassador to Mongolia, and worked in Afghanistan from 2012 to 2013 — an experience he describes in his memoir, "The Dust of Kandahar: A Diplomat Among Warriors in Afghanistan." He says the date of his retirement, on Trump's Inauguration Day, was a coincidence.

Most dissent channel memos record disagreements with government policy. For example, 50 foreign service officers are reported to have protested the lack of US action to help Syrian civilians last summer.

The dissents are supposed to be confidential, although “some do get into the newspapers,” Addleton says. “These are not classified documents. They’re just voicing a concern about an issue of the day.”

The memos are also supposed to have no negative consequences on the writer’s career. But Addleton says he did feel like he was “sticking his neck out” when he wrote one in 2012.

“That’s what makes the dissent program so good,” says Addleton. “It requires you to stick out your neck, but it’s through a proper channel, and it’s hoped to be done in a constructive way, knowing that your view may not prevail. But at least somebody will listen to your view, take it into account, and respond on their own with what I guess you’d consider would be department policy.”

Addleton wrote his dissent memo “solo” to protest a decision by Washington to spike a story he’d written for the local press in Afghanistan and Pakistan. In due course, he got a respectful reply. It earned him an award from the American Foreign Service Association for moral courage and constructive criticism.

The dissent channel originated during the Vietnam War era, after a confrontation between the administration and foreign service officers who disagreed with government policies in Southeast Asia.

Addleton says the Trump administration's criticism of the travel ban dissent memo is reminiscent of that Vietnam period. He hopes the memo’s supporters are not intimidated, but says he would understand if some back out. “I think one’s moral conscience is one that you bring into any job that you have, and you know there’s a breaking point.”