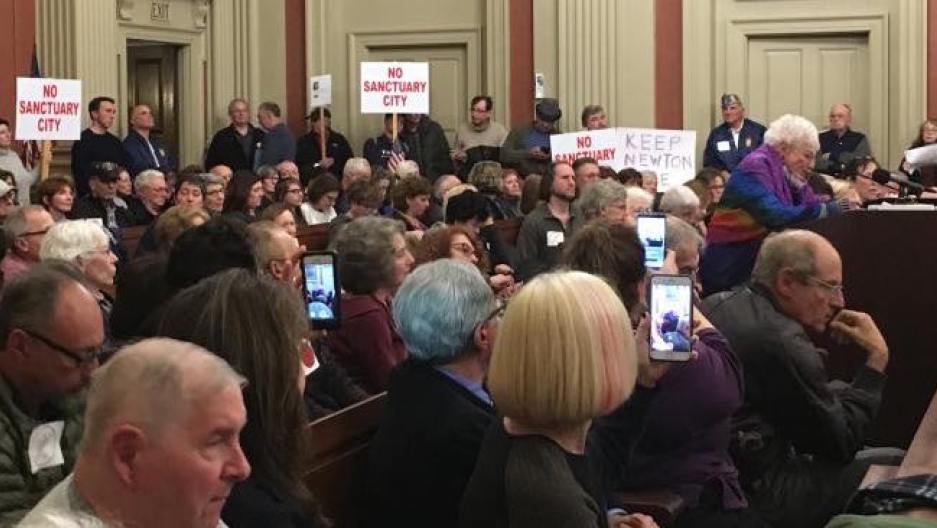 This public meeting in Newton was packed and the mood was tense.

President Donald Trump is known for caustic tweets and a disregard for political correctness. His campaign ushered in a new level of name-calling and mudslinging to presidential politics. There’s been a similar tenor to the debates playing out in Newton, Massachusetts.

On a rainy night, people filed past several police officers and packed into City Hall. They were there to debate whether Newton should position itself as a sanctuary city for undocumented immigrants.

Newton is not alone in debating whether to adopt sanctuary city status — and, it’s not a big change from Newton’s existing police practice. What’s interesting in Newton is the bitterness of the debate.

In this affluent, largely white Boston suburb — where roughly 75 percent of voters cast a ballot for Hillary Clinton — the meeting room is on edge.

Those against sanctuary city status voice anxiety about undocumented immigrants causing machete attacks and a spike in tuberculosis.

“You want to take a chance that our water supply might be poisoned? Our bridges blown up?” asked one resident.

Another man took the podium, stating, “One wonders if there was a fire in an apartment building, if any of the sanctuary city folks would have a moral dilemma deciding about saving their own family before strangers.”

“We are better off if we collectively stick our fingers into a bowl of Ebola and lick them. Our deaths will be quicker and less painful,” said another.

“I have some serious fears — real fears.”

The others, who support an ordinance positioning Newton as a sanctuary city, say they’re scared, too.

“I am more afraid of some of the people in this room than I am of the people they might bring to this country,” said one speaker.

"I have heard a lot tonight, tired tropes of protecting our women and children,” said one man to the sounds of boos. “My older son has been called a 'n*****' at the train station. This is new that people are so open about their racism.”

A woman took the podium: “Although I am a citizen, I do not feel welcome in this place, listening to the hatred here. I feel threatened here. I am serious, I don't feel safe.”

Amidst the fears and jeers, Councilman Allan Ciccone Jr. was at the head of the room, trying to keep order.

He admonished the crowded room: "If the applause happens again, we're going to empty the room."

I spoke to Ciccone a few days later. He said the meeting was particularly large and particularly contentious.

“I think it has a lot to do with what’s going on nationally, obviously,” he said.

But when local politics gets nasty, Ciccone says opposing sides still have to cooperate for the city to function. They can’t just retreat to their echo chambers.

“This is still my neighbor. We still have to get along. We have the barbecue in September,” Ciccone said, imagining a resident’s thought process. “What are we going to do, have this one issue come between us and the friendship and all that? I just don't agree with that.”

“People got to take the high road and say, ‘This is not what we want,’” said Haywood as he sat at Johnny’s Luncheonette, a popular diner and community gathering spot in Newton. Like the diner, Haywood is something of an institution here. He's lived in the city all of his 76 years.

At Johnny's, he's having lunch with Matthew Miller. And while not everyone in the booths at this diner feels like things are getting worse, Haywood and Miller say they sense new and deep divisions.

“Newton’s getting like that by the day,” said Haywood.

Miller agreed, “We definitely have a divide. The discourse has become volatile, and I think it is because it’s acceptable from top down.”

They warn that disrespectful rhetoric and actions are not limited to City Hall, they’re trickling down to classrooms as well.

Miller, who was the president of the parent-teacher organization at a local elementary school, recalls when “a teacher came to me and said that she did notice an uptick in the negativity. Not just the negativity, but the ease at which the negativity was [spoken] out loud and directed not only to the staff but to the other students.”

The men fault national leaders for this ugliness, but say it's up to the local community to stop it.